Where in health am I? : Home / Health Cloud / Professionals / Doctors / Specialties / Preventive Medicine

Medical science has proven time and again that when the resources are provided, great progress in the treatment, cure, and prevention of disease can occur - Michael J. Fox 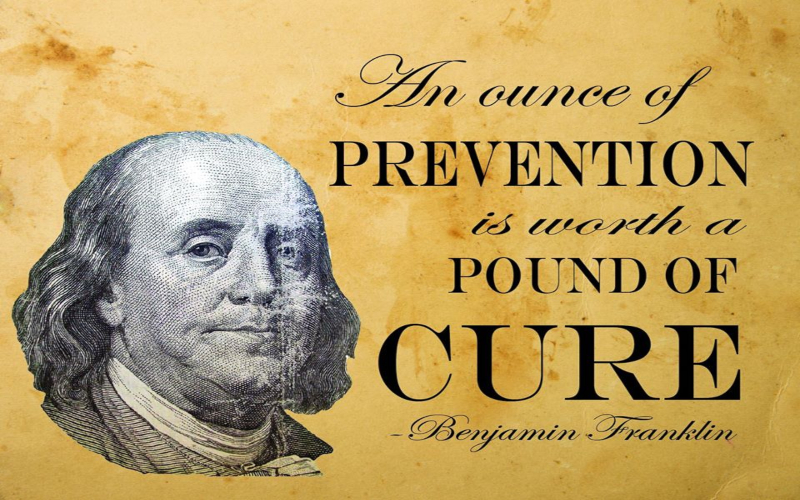 It seems like a no-brainer. Since about 75 percent of health care spending in the United States is for largely preventable chronic illnesses such as Type 2 diabetes and heart disease, providing more preventive care should cut costs.

If only. In a report released on Tuesday, the non-profit Trust for America's Health outlined a plan "to move from sick care to health care" by putting more resources into preventing chronic disease rather than treating it, as the current system does. There is a strong humanitarian justification for prevention, argued Trust Executive Director Jeffrey Levi in an interview, since it reduces human suffering.

But the report also makes an economic argument for preventive care, highlighting the possibility of reducing health care spending - which in 2011 reached $2.7 trillion, just shy of 18 percent of gross domestic product - by billions of dollars. And that has health economists shaking their heads.

"Preventive care is more about the right thing to do" because it spares people the misery of illness, said economist Austin Frakt of Boston University. "But it's not plausible to think you can cut healthcare spending through preventive care. This is widely misunderstood."

A 2010 study in the journal Health Affairs, for instance, calculated that if 90 percent of the U.S. population used proven preventive services, more than do now, it would save only 0.2 percent of health care spending.

Some disease-prevention programs do produce net savings. Childhood immunizations, and probably some adult immunizations (such as for pneumonia and the flu), are cost-saving, found a 2009 analysis for the Robert Wood Johnson Foundation. The vaccines are cheap, and large swaths of the population are vulnerable to the diseases they prevent. The cost of providing them to everyone is less than that of treating the illnesses they prevent.

Counseling adults about using baby aspirin to prevent cardiovascular disease also produces net savings. The counseling is inexpensive, the aspirin even cheaper and the costs of heart disease, which strikes one in three U.S. adults, are enormous. Screening pregnant women for HIV produces net savings, too. Those, however, are exceptions.

One big reason why preventive care does not save money, say health economists, is that some of the best-known forms don't actually improve someone's health.

These low- or no-benefit measures include annual physicals for healthy adults. A 2012 analysis of 14 large studies found they do not lower the risk of serious illness or premature death. But about one-third of U.S. adults get them, said Dr. Ateev Mehrota, a primary-care physician and health care analyst at RAND, for a cost of about $8 billion a year.

Similarly, some cancer screenings - including for ovarian cancer and testicular cancer, and for prostate cancer via PSA tests - produce essentially no health benefits, causing the U.S. Preventive Services Task Force to recommend against their routine use. The task force bases its recommendations on medical benefits alone, not costs.

The second reason preventive care brings so few cost savings is the large number of people who need to receive a particular preventive service in order to avert a single expensive illness.

"It seems counterintuitive: If you provide care to prevent all these expensive diseases, it should save money," said Peter Neumann, an expert on health policy and professor of medicine at Tufts University School of Medicine. "But prevention itself costs money, and some preventive measures can be very expensive, especially if you give them to a lot of people who won't benefit."

If preventive care could be provided only to those who are going to get the illness, it would be more cost-effective. "But in the real world, the number needed to screen or to treat in order to prevent one case of illness can be huge," said BU's Frakt, who blogs at theincidentaleconomist.com.

Currently, many people who do not benefit from a preventive service receive it, paying something for nothing. Studies have calculated those numbers, which can be surprisingly high.

For instance, 217 high-risk smokers would have to undergo a CT lung scan for one to be spared death from lung cancer, according to a database of studies maintained by Dr. David Newman, an emergency physician at Mount Sinai School of Medicine in New York City. One hundred post-menopausal women who have had a bone fracture would have to take drugs called bisphosphonates in order for one to avoid a hip fracture.

By comparison, only 50 people with heart disease must be treated with aspirin for one to avoid a heart attack or stroke, making this a good buy.

The numbers of people who need to be treated for one to benefit are so high because so few will get the disease the preventive is meant to avert. It's like treating every house for termites, said Neumann, co-author of the Robert Wood Johnson report: The vast majority would never have gotten infested in the first place, so the thousands spent to avoid the infestation is money for nothing.

The failure of many preventive services to improve health, plus the large number of people who have to receive preventive care for one to be spared an illness he or she would otherwise get, limit the economic savings.

A better gauge of the value of preventive medicine is bang for the buck; that is, not whether it reduces health care spending but whether it buys more health than treating the disease does. "We don't ask whether cancer treatment or heart disease treatment saves money," said Dr. Steven Woolf, professor of family medicine at Virginia Commonwealth University Medical Center in Richmond. "But it is reasonable to ask how to make our healthcare dollar go further."

On that score, screening for hypertension and for some cancers (such as colorectal and breast) are good investments, he said, at less than $25,000 per year of healthy life. In contrast, such common treatments as angioplasty cost $100,000 or more per healthy year of life.

There are two glimmers of hope in this bleak picture. For preventive medicine to help rein in the nation's soaring healthcare spending, it should be provided someplace other than doctors' offices.

"Some of the most common chronic, preventable diseases might be best addressed outside the clinical setting," said the Trust's Levi, such as through wellness programs at YMCAs and health education and screening programs at houses of worship. "But that requires Medicaid to be more flexible in who they'll reimburse."

It also requires a more expansive definition of preventive medicine. The Trust suggests such steps as extending bus lines to parks so people without cars can go someplace pleasant for physical activity and other "community-based" efforts. These strategies save more money in healthcare spending than they cost.

For instance, at a program in Akron, Ohio, profiled in the new report, physicians and others coordinate care for patients with Type 2 diabetes. It reduced the average cost of care by more than 10 percent, or $3,185 per year, largely by reducing pricey emergency-room visits.

And at Boston Children's Hospital, an asthma program that sends community health workers into patients' homes to reduce the environmental triggers of asthma has saved $1.46 in health care costs for every $1 invested. It has reduced asthma-related hospital admissions by 80 percent and asthma-related emergency department visits by 60 percent, reports the Trust.

The other promising approach is to target preventive care at those most likely to develop a chronic disease, not at low-risk people. Such "smart" prevention increases the chances of preventing expensive diseases and saving money.

In contrast, unthinking expansion of preventive medicine is the wrong prescription, say experts. "If you start giving preventive care to more people, many of whom won't benefit from it, it's going to be very, very expensive," said Tufts' Neumann.

Preventative medicine: the argument for and against

Preventative medicine has long used drugs to prevent the onset of disease. Those with symptoms such as high blood sugar or pressure are often diagnosed with the “pre-condition”, such as prediabetes or prehypertension, if their symptoms haven’t yet reached the levels which define the disease. It is estimated that around 7m people in the UK alone have prediabetes and have an increased risk of developing type 2 diabetes. But diagnosis of this pre-condition allows pharmaceutical drugs to be prescribed, which could delay or prevent the onset of the disease. However, there are arguments which support and condemn pre-treatment in this way.

The Ultimate Summary of the China Study: Here’s What You Need to Know

The China Study is one of those weighty, important books that is perhaps more talked about than actually read. It’s easy to see why: At 417 pages packed with nutrition facts and research stats, it’s a lot to digest—not exactly a beach read.

"Preventive care is more about the right thing to do" because it spares people the misery of illness, said economist Austin Frakt of Boston University. "But it's not plausible to think you can cut healthcare spending through preventive care. This is widely misunderstood."

Welcome to LongeCity the premier forum about extending the human lifespan

American Board of Preventive Medicine

The American Board of Preventive Medicine was established to promote the health and safety of the American people through our high standards in the certification and maintenance of certification in the profession of preventive health.

Founded in 1985, the Physicians Committee for Responsible Medicine (PCRM) is a nonprofit organization that promotes preventive medicine, conducts clinical research, and encourages higher standards for ethics and effectiveness in research.