Where in health am I? : Home / Health Cloud / Professionals / History of Health & Medicine / Black Death

The people die so, that now it seems they are fain to carry the dead to be buried by daylight, the nights not sufficing to do it in. And my Lord Mayor commands people to be inside by nine at night that the sick may leave their domestic prison for air and exercise - Samuel Pepys 1633 - 1703 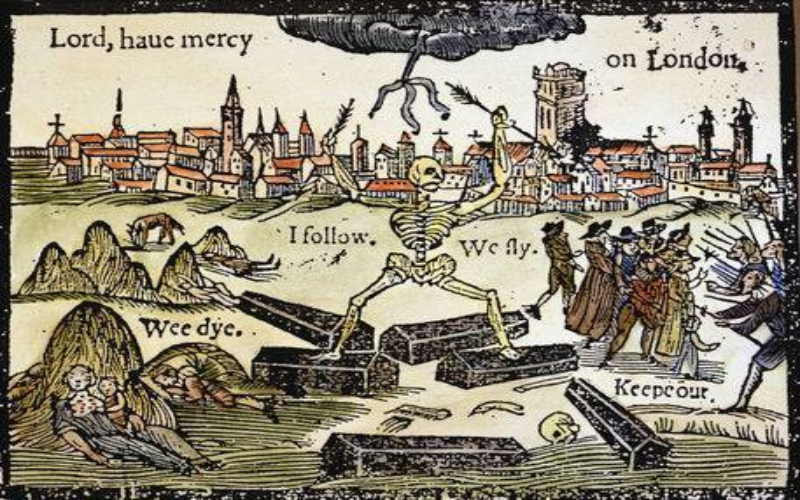 image by: This Podcast Will Kill You

Contemporaries were horrified by the onset of the plague in the wet summer of 1348: within weeks of midsummer people were dying in unprecedented large numbers. Ralph Higden of Chester, the best known contemporary chronicler thought 'scarcely a tenth of mankind was left alive'. His analysis of the scale of the mortality is repeated by other commentators. The phrase 'there were hardly enough living to care for the sick and bury the dead' is repeated in various sources including a chronicle compiled at St Mary's Abbey, York.

The Malmesbury monk, writing in Wiltshire, reckoned that 'over England as a whole a fifth of men, women and children were carried to the grave'. The…

The mere mention of the plague brings to mind the devastating “Black Death” pandemic that spread across Europe in the 1300s. Mass graves were piled high with the corpses of its millions of victims, while the disease rampaged across Europe for many decades. Yersinia pestis, the bacterium responsible for that plague pandemic, still persists in the environment among rodent and flea populations today, and human outbreaks regularly occur around the world.

The Bright Side of the Black Death

The disease spread through families, houses, villages, towns, and cities with terrifying speed and staggering mortality. This tragedy launched a socioeconomic and evolutionary transformation in Europe that changed the course of history.

The source of the Black Death in fourteenth-century central Eurasia

The Black Death, caused by the bacterium Y. pestis10, was the initial wave of a nearly 500-year-long pandemic termed the second plague pandemic and is one of the largest infectious disease catastrophes in human history.

Did the Black Death give birth to modern plagues?

The Black Death was obviously terrifying, and the disease is now assumed to have been a particularly intense pandemic of bubonic and pneumonic plague caused by the bacterium Y. pestis. But this is still disputed.

This was the worst outbreak of plague in England since the black death of 1348. London lost roughly 15% of its population. While 68,596 deaths were recorded in the city, the true number was probably over 100,000. Other parts of the country also suffered.

How Bodies Were Buried During History's Worst Epidemics

From the black death to the Spanish flu epidemic to last year's Ebola outbreak, what did people do with all those diseased corpses?

The coming of the Black Death, when in just two years perhaps one third to one half of Europe's population was destroyed, marks a watershed in Medieval and Renaissance European History. Bubonic plague (Yersinia pestis) had been absent from Western Europe for nearly a millenium when it appeared in 1348. The reaction was immediate and devastating. Up to two thirds of the population of many of the major European cities succumbed to the plague in the first two years.

The Black Death & Bubonic Plague in the Elizabethan Era

William Shakespeare lived in the Elizabethan era when the bubonic plague, sometimes referred to as the Black Death, was virulent. He was known to have a terrible fear of the deadly disease and its consequences and this is hardly surprising as it touched so many areas of his life including his life as an actor at the Globe Theater. The London Plague of 1665

Coming out of the East, the Black Death reached the shores of Italy in the spring of 1348 unleashing a rampage of death across Europe unprecedented in recorded history. By the time the epidemic played itself out three years later, anywhere between 25% and 50% of Europe's population had fallen victim to the pestilence.

In the early 1330s an outbreak of deadly bubonic plague occurred in China. The bubonic plague mainly affects rodents, but fleas can transmit the disease to people. Once people are infected, they infect others very rapidly. Plague causes fever and a painful swelling of the lymph glands called buboes, which is how it gets its name. The disease also causes spots on the skin that are red at first and then turn black.

In the year 1665 death came calling on the city of London. Death in the form of plague. People called it the Black Death, black for the colour of the tell-tale lumps that foretold its presence in a victim's body, and death for the inevitable result. The plague germs were carried by fleas which lived as parasites on rats. Although it had first appeared in Britain in 1348, the islands were never totally free of plague, but it was like an unpleasant possibility that people just learned to live with while they got on with their business. This time it was different.

What was known as the Black Plague began in the East, in countries such as India, Tartar, Syria, and Armenia. It included at least four variants and was caused by the bacillus Yersina pestis. This bacillus thrives in the stomach of fleas which in turn are typically parasites of black rats.

Pandemics, places, and populations: Evidence from the Black Death

The Black Death killed 40% of Europe’s population between 1347 and 1352, but little is known about its spatial effects. The column uses variation in Plague mortality at the city level to explore the short-run and long-run impacts on city growth. After less than 200 years the impact of Black Death mortality in cities was close to zero, but the rate of urban recovery depended on advantages that favoured trade.

Contemporaries were horrified by the onset of the plague in the wet summer of 1348: within weeks of midsummer people were dying in unprecedented large numbers. Ralph Higden of Chester, the best known contemporary chronicler thought 'scarcely a tenth of mankind was left alive'. His analysis of the scale of the mortality is repeated by other commentators.

The Black Death and The Dancing Mania

This eBook is for the use of anyone anywhere at no cost and with almost no restrictions whatsoever.