Where in health am I? : Home / Health Cloud / Public Health / Recalls / Medical Devices

If the FDA recalls pills, a patient can at least stop taking them immediately. With implanted devices, patients are sort of stuck, at least for a while — and that's if surgeons can even safely remove them.- Michael Matheny 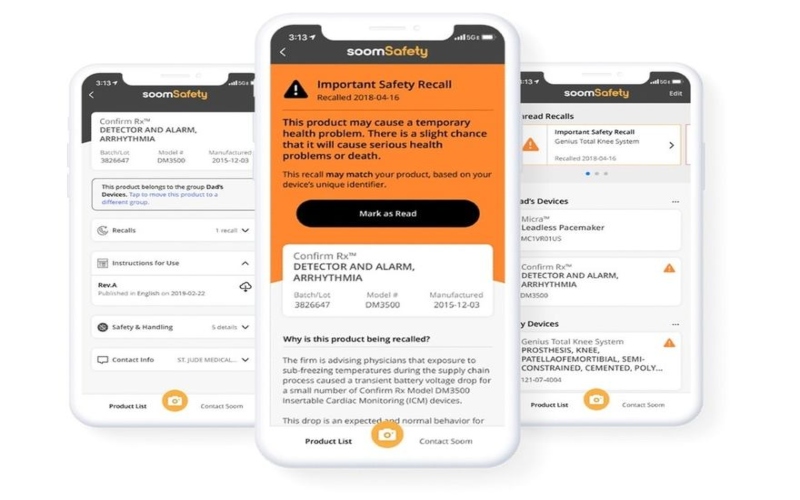 image by: Health It Briefing

Things sometimes go wrong with airbags, food and drugs, prompting recalls. It can also happen with medical devices, though you’d think lifesaving devices like heart defibrillators or artificial hips would be closely monitored.

But the data needed to systematically and rapidly identify dangerous medical devices are not routinely collected in the United States. It wouldn’t be that hard to do.

Problems with medical devices are not infrequent. Defibrillators implanted in nearly 200,000 patients were recalled in 2011 because of a faulty part. More recently, the Essure birth control device implanted in women’s fallopian tubes has been associated with pain and deaths. Improper handling…

This database contains information on more than 120,000 Recalls, Safety Alerts and Field Safety Notices about medical devices distributed worldwide. The information connects with medical device companies and their subsidiaries. Compiled by the International Consortium of Investigative Journalists (ICIJ) and 58 media partners in 36 countries during our year-long Implants File investigation, the database fills a critical information void.

The film, called The Bleeding Edge, claims that the way medical devices make it to the U.S. market is lax and potentially dangerous. The filmmakers interview doctors and patients who say they’ve been personally harmed by an array of devices—including cobalt-based hip replacements, vaginal mesh and robotic surgery devices—and who feel that the guardian group of the medical device industry, the U.S. Food and Drug Administration (FDA), is not doing enough to protect them.

Recalls of medical devices and drugs are up - can anyone predict when it will happen next?

This eye-opening look at the fast-growing medical device industry reveals how the rush to innovate can lead to devastating consequences for patients.

Are Implanted Medical Devices Creating A 'Danger Within Us'?

Medical journalist Jeanne Lenzer warns that implanted medical devices are approved with far less scrutiny and testing than drugs. As a result, she says, some have caused harm and even death.

U.S. health officials said Monday they plan to overhaul the nation’s decades-old system for approving most medical devices, which has long been criticized by experts for failing to catch problems with risky implants and medical instruments.

There's no doubt that surgically implanted medical devices can improve lives. Hip and knee replacements can help people regain their mobility. Drug pumps can deliver doses of pain-relieving medicine on demand. And metal rods can stabilize spines and broken bones. But implanted devices can also do serious damage...

Most patients never encounter these FDA warnings after failed recall attempts. Instead, we mistakenly assume that the FDA will intervene to pull dangerous products from the market, keeping our drug supply safe. But the FDA’s current tools are ill-suited to address urgent safety issues related to tainted drugs, leaving the agency with insufficient means to protect patients from potentially dangerous products that have already been distributed.

Medical devices for pain, other conditions have caused more than 80,000 deaths since 2008

Devices are rarely pulled from the market, even when major problems emerge. And the FDA does not disclose how many devices are implanted in the U.S. each year — critical information that could be used to calculate success and failure rates.

The Safety Record of Medical Devices

Studies demonstrate that 99.5 percent of low- to moderate-risk devices have never experienced a serious recall.

Things sometimes go wrong with airbags, food and drugs, prompting recalls. It can also happen with medical devices, though you’d think lifesaving devices like heart defibrillators or artificial hips would be closely monitored. But the data needed to systematically and rapidly identify dangerous medical devices are not routinely collected in the United States. It wouldn’t be that hard to do.

White hat hackers have previously pointed out the risks with connected medical devices. In its announcement, the FDA noted that this vulnerability could allow third parties to rapidly drain the pacemaker’s battery or adjust the operation of the device.

Prescription drugs, over the counter medications, and medical devices are supposed to help people feel better. Pharmaceutical and device companies spend millions, and sometimes billions, of dollars researching and developing products that target specific diseases, conditions, and symptoms. Unfortunately, while many of these products heal people, bring relief, and even cure diseases, they may also cause harm, secondary conditions, or debilitating side effects.

No product is ever risk free. Some of the risks are known about when a medicine is first licensed or medical device first used. However, some information only comes to light later as more people use the products. This section includes current and historic alerts, messages and advice and guidance we have issued about products. This section also includes our safety reporting forms for medicines, medical devices and blood.

This section includes the most significant product actions over the last five years based on the extent of distribution and the degree of health risk. In this section, you will find a listing of FDA and industry press releases regarding the product recalls.