The more we recognize the capacity to suffer, the harder it is to justify practices that cause suffering - Greggory Moore 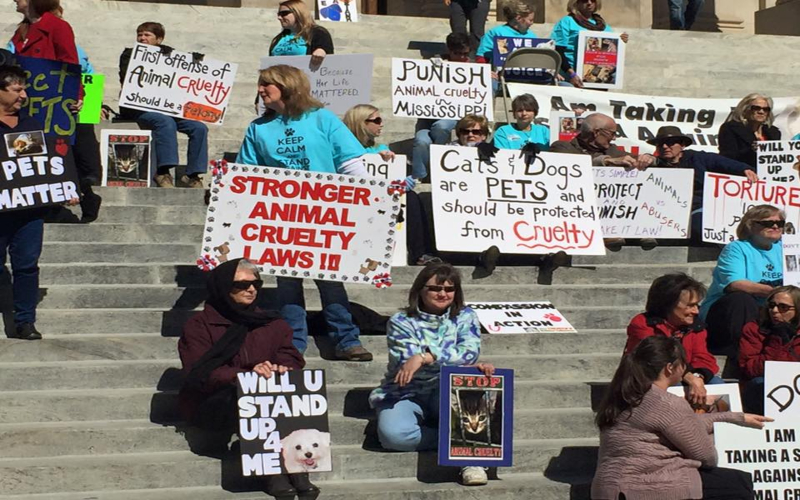 image by: Statewide Rally to Stand Against Animal Cruelty-MS

Do animals suffer? Do animals know who they are? Do animals enjoy a good meal? Do animals think about what they will do next? Intuitively, you would likely answer yes, of course animals feel and think! Spend one day with a dog or watch a mother cow with her young and you would be hard pressed to deny them these basic emotional and cognitive capacities.

But deny them we have. While, on one level, we know that animals can suffer and can enjoy things in life like we do, on another level, we try to dismiss these capacities in order to justify our use of animals in ways that cause them tremendous suffering. Often enough, that justification has come from scientists who have argued that non-human…

How Much Pain Should Animals Endure for Science?

Animal suffering is incredibly difficult to measure. So is whether or not it actually benefits research.

All Animals Have Rights: A Researcher’s Perspective

As a biologist, I believe all living organisms have rights. As one who spends a good portion of every year in close company with smart and social animals, such as crows, ravens, and wolves, I am convinced that all birds and mammals deserve the care and consideration we give humans.

Should Animals Have The Same Rights As People?

Humans have always seen themselves as distinct from other creatures, but science is forcing us to reconsider that position.

In addition to a growing sensitivity to the rights of animals, another significant reason for the increased attention to animal cruelty is a mounting body of evidence about the link between such acts and serious crimes of more narrowly human concern, including illegal firearms possession, drug trafficking, gambling, spousal and child abuse, rape and homicide.

What Our Treatment of Orcas Tells Us About Our Societal Health

Most of us would agree that cruelty is unhealthy. And so a recent failure to act by the California legislature gives us a window into another way in which we are a very unhealthy society.

Animal Cruelty Is the Price We Pay for Cheap Meat

In its scrutiny of Big Meat – a cartel of corporations that have swallowed family farms, moved the animals indoors to prison-style plants in the middle of rural nowhere, far from the gaze of nervous consumers, and bred their livestock to and past exhaustion – the Humane Society (and outfits like PETA and Mercy for Animals) is performing a service that the federal government can’t, or won’t, render: keeping an eye on the way American meat is grown.

ASPCA at 150: The Next Steps in Preventing Animal Cruelty

While our historic milestone provides plenty of reasons to take pause and commemorate our past, the urgency of our cause demands that we continue to look ahead. To that end, the ASPCA is at the forefront of three relatively new areas of animal welfare concentration where the potential for saving lives is nearly limitless.

Land of Hope and Glory

The hidden truth behind UK animal farming - featuring approximately 100 facilities across the UK and never before seen undercover footage.

The Lie We Live

Exposing the truth about our world. My name is Spencer Cathcart and this is a video I wrote & created.

The World Is Going Cruelty Free

With so much senseless animal cruelty in the world it can often seem like compassionate minded individuals have little hope of changing the status quo. However, history has shown that public opinion and consumer power have long been driving forces in influencing corporate behavior and legislative initiatives. It just takes time. The cruelty free cosmetics movement is no exception.

Why is PETA Killing Thousands of Rescue Pets?

PETA advertises itself as the largest animal rights organization in the world, with over three million members and supporters. PETA stages "rescue" operations of abused animals, and can serve a useful purpose, which it is exceedingly adept at publicizing. What PETA does not publicize, however, it euthanizes -- kills -- some 85% of the animals it rescues.

While, on one level, we know that animals can suffer and can enjoy things in life like we do, on another level, we try to dismiss these capacities in order to justify our use of animals in ways that cause them tremendous suffering. Often enough, that justification has come from scientists who have argued that non-human animals lack sentience and/or cognitive sophistication.

We exist to end the abuse of animals raised for food by influencing the policies of the world’s biggest companies, demanding legislation, and empowering others to take action and leave animals off their plates.

horizontal rule Since 1877 the historic American Humane Association has been at the forefront of every major advancement in protecting children, pets and farm animals from abuse and neglect. Today we’re also leading the way in understanding human-animal interaction and its role in society.

The Animal Legal Defense Fund’s mission is to protect the lives and advance the interests of animals through the legal system. ALDF accomplishes this mission by filing high-impact lawsuits to protect animals from harm, providing free legal assistance and training to prosecutors...

Be a part of the world’s largest community for good.

A national 501(c)3 nonprofit dedicated to improving the lives of farm animals through the "Certified Humane®" labeling program.

Animals in laboratories suffer regardless of national boundaries, so our experts lobby and work with governments and politicians across the world. Always talking rationally and constructively, we set out the benefits of moving away from cruel and old-fashioned animal experiments. We challenge decision-makers to embrace progressive policy.

Welcome to HumaneWatch. This is a serious and sober effort, and it’s long overdue. Sometimes, non-governmental organizations can also become so powerful that they stop being responsive to the people they’re supposed to serve. And even charities with the best reputations aren’t immune to making mistakes.

The International Association Against Painful Experiments on Animals (IAAPEA) was founded in 1969 and is against all experiments, animal testing, vivisection and procedures performed on laboratory animals.

We are Animal Rights Knights fighting for the rights of all animals. Our mission: to spread educational awareness to our generation about being pet responsible, the importance of spay/neuter, shelter adoptions and wildlife conservation.

Because many animal cruelty laws do not protect them, farmed animals are often beaten, mutilated, and painfully slaughtered. Together, we can expose and end this abuse. Join us in helping protect farmed animals by inspiring compassionate food choices and policies.

People for the Ethical Treatment of Animals (PETA) is the largest animal rights organization in the world, with more than 3 million members and supporters. PETA focuses its attention on the four areas in which the largest numbers of animals suffer the most intensely for the longest periods of time: on factory farms, in the clothing trade, in laboratories, and in the entertainment industry.

Our mission is to end the suffering of wild animals in captivity, rescue individual animals in need, protect wildlife — including highly endangered species — in their natural habitats, and encourage compassionate conservation globally.

As you read this, another innocent animal is being abused, neglected or forced to fight. The first step to creating positive change for these animals is recognizing the cruelty that threatens them.

Beyond the need to recognize and put an end to animal cruelty for the sake of the animal victims involved, also important is the very direct connection between animal cruelty and human violence. In response to this crisis, many domestic violence shelters have begun to partner with local animal protection agencies to create "safe havens" for the pets of the human victims.

People who abuse animals are more likely to hurt other people. This is why it’s so important to report animal abuse. Not only will you help the animal, but you will help your community be a safer place for everyone.