The snake which cannot cast its skin has to die. As well the minds which are prevented from changing their opinions; they cease to be mind - Friedrich Nietzsche 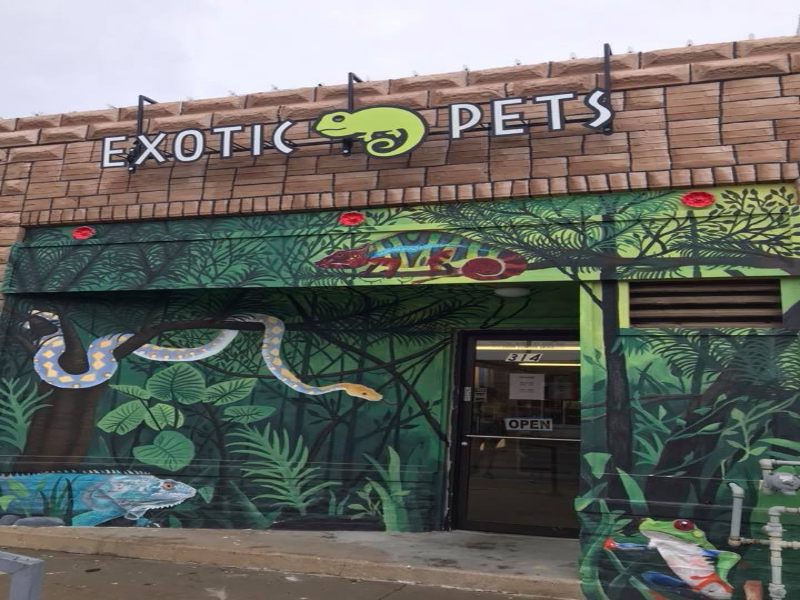 Each year millions of exotic animals are sold around the world, destined for people’s basements and backyards. The term “exotic” doesn’t have a set definition, but it usually refers to a wild animal or one that’s more unusual than your standard dog or cat. The booming business in exotic pets is known as the exotic pet trade.

Some of this trade is legal, but many times animals are captured from the wild illegally to supply demand for exotic pets. The illicit sales of live animals comprises a major part of the overall illegal wildlife trade, a multibillion-dollar global black market.

People have kept exotic pets throughout history, but demand for unique creatures has exploded in recent years. Much of this can be attributed to the popularity of e-commerce and social media websites, which have provided a way for people to easily advertise the sale of live animals. They’ve also popularized exotic animals by providing a place where people can show them off. A flurry of videos posted to YouTube in 2015 of slow lorises eating rice balls in captivity, for example, went viral and led to poaching of the wide-eyed primates for the pet trade.

Where exotic pets come from

Some exotic pets are bred in captivity. Conservationists often see captive breeding as a way to save wild animals from poaching for the pet trade, and many countries allow for the export of captive-bred animals as long as the proper legal documents are obtained.

The effects of the exotic pet trade

Rampant poaching for the exotic pet trade is devastating animal populations worldwide. It has decimated numbers of Madagascar’s prized radiated tortoises, for example, and led to the endangered status of African gray parrots, birds known for their impressive vocal abilities. What’s more, many animals suffer during capture and transport—and even if they do end up at their final destination alive, they are often distressed—unable to eat, move, and behave as they would in the wild.

The exotic pet business also affects humans and animals not involved in the trade. Wild animals have the potential to attack their owners or spread disease, such as ebola and SARS. An outbreak of exotic Newcastle disease (END), which resulted in the deaths of 12 million birds in the U.S. in the 1970s, was traced to parrots smuggled from South America.

Efforts to combat the trade

The Convention on International Trade in Endangered Species of Wild Fauna and Flora (CITES), an international agreement signed by 183 governments, has voted to ban or limit trade in many animal species sought after as pets. Many countries also prohibit domestic sales or possession of certain animals. In the U.S., laws regulating the ownership of exotic pets vary from state to state.

In addition, nonprofits around the world have been trying to shut down the exotic pet trade by educating people about the harms of owning these animals. Research conducted by the World Animal Protection, a U.K.-based nonprofit, found that the best way to deter people from owning an exotic animal is to emphasize the risks they pose to humans, not the animals themselves.

Primates are a diverse group of over 250 species that live across five continents but are most commonly found in the tropics, from Uruguay to Uganda and Venezuela to Vietnam. They are wild, and attempts to domesticate them result in a mentally disturbed animal that no amount of training, beating or adoring will ever reverse.

Abandoned or escaped non-traditional pets as the source of a growing number of ecological invasions.

Everything's cute and cuddly until someone gets trampled by a feral pig.

An Inside Look at the Exotic Animal Trade

Wildlife trafficking is estimated to be a $19 billion per year global business, surpassed only by black-market sales and trafficking of drugs, humans, and firearms.

“Exotic” is a fluid term for pets, but we ought to be able to agree on a list of animals that historically do not cohabitate with humans and pose such a threat that they must be caged. Then it’s an easy step to come up with federal laws to protect the animals and their neighbors. It’s past time to regulate the wild beasts: us.

An estimated three of every four emerging infectious diseases in humans originate in wildlife. That’s not to say that all of the estimated one million animal diseases can make the jump to humans. But when they do, which qualifies the disease as zoonotic, devastating consequences can result. Of particular concern is when the pathogen becomes capable of direct human-to-human transmission.

The federal government largely legislates the owning of exotic pets. The law defines “exotic” as “animals that do not occur naturally in the wild in Australia” – which actually includes dogs and cats. However “domesticated mammals”, which also covers cows, sheep and other farm animals, are generally legal to buy and own. Commercial trade in exotic reptiles and amphibians, on the other hand, has been banned since 1999.

s it ever OK to own exotic pets? We met people from all sides of the debate to find out.

Life on the Wild Side

In pockets of the country, homeowners live among lions, tigers and capybaras.

The Care and Keeping of Raccoon Dogs

They should eat a varied diet—and they shouldn’t be allowed to escape.

Thousands of bears, panthers, leopards, lions, and elephants were killed in the Colosseum—but how did they get there in the first place?

“There’s no such thing as a tame snake.”

Why Rich People Are Obsessed With Owning Exotic Animals

Exotic pets don't come for cheap, yet there's a surging demand for captive wildlife. Today, owning an exotic animal is almost a rite of passage for the rich and the famous. On social media sites such as Instagram and Tinder, chained tigers and cheetahs are flaunted next to Lamborghinis, Louis Vuitton bags, and luxury yachts; mere accessories to the one percent who can afford them.

Millions of animals are taken from their habitats to live in homes as pets, feeding a thriving illegal trade in wildlife.

Journal of Exotic Pet Medicine provides practitioners with a convenient, comprehensive, "must have" resource to enhance and elevate their expertise of exotic pet medicine

The mission of the American Association of Zoo Veterinarians is to optimize the health, welfare, and conservation of wildlife through education, scientific study, collaboration and advocacy.

Association of Reptilian and Amphibian Veterinarians

Veterinary organization promoting conservation and humane treatment of all reptilian and amphibian species through education, captive breeding, and habitat preservation.

We are a not-for-profit, no-kill ferret shelter dedicated to - the care of homeless ferrets - placement into permanent loving homes - hospice for the elderly, sick and terminally ill - ferret education

House Rabbit Society is an all-volunteer, nonprofit organization with two primary goals: -To rescue abandoned rabbits and find permanent homes for them and -To educate the public and assist humane societies, through publications on rabbit care, phone consultation, and classes upon request.

To save the lives of sick, orphaned, injured, displaced, and debilitated wild animals entrusted to our care so that they may be successfully returned to their native habitat.

TARANTULAS.com is the original Internet source for tarantula information and was a leader in tarantula retail sales and captive breeding.

The 25 worst mammals to keep as pets

Dogs and cats are being replaced by exotic animals. But you don’t want these ones in your house.