Artificial intelligence is growing up fast, as are robots whose facial expressions can elicit empathy and make your mirror neurons quiver - Diane Ackerman 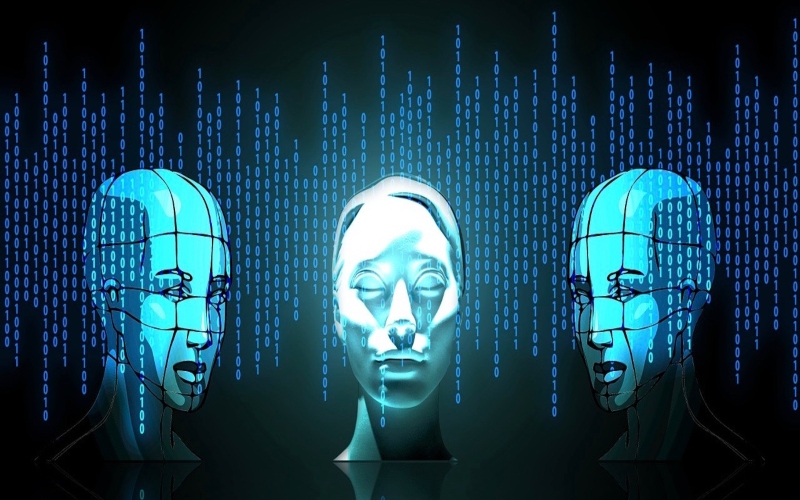 How AI Will Redefine Human Intelligence

The machines are getting smarter. They can now recognize us, carry on conversations, and perceive complex details about the world around them. This is just the beginning.

As computers become more human-like, many worry that robots and algorithms will displace people. And they are right to. But just as crucial is the question of how machine progress will change our perceptions of human abilities.

Once a job can be done by a computer, it changes the way people think about the nature of that job. Let me give you an example. Travel with me, if you will, back to the year 1985. Here we are in Baltimore, Maryland. It’s Christmastime.

Hutzler’s Department Store is all twinkle…

As Artificial Intelligence Moves Into Medicine, The Human Touch Could Be A Casualty

Depending on how it's deployed, it could help reduce medical errors and potentially reduce the cost of care. It could also create a gulf between health caregivers and people of more modest means.

How COVID-19 Is Accelerating the Adoption of AI in Healthcare

The COVID-19 pandemic has brought about profound changes within both the healthcare system and the world at large. The ongoing and dynamic nature of this public health crisis is exposing the importance of having systems and solutions that are adaptable rather than fixed.

The Bot Decade: How AI Took Over Our Lives in the 2010s

Humans and tech have always coexisted and coevolved, but this decade brought us closer together—and closer to the future—than ever. These days, you don’t have to be an engineer to participate in AI projects; in fact, you have no choice but to help, as you’re constantly offering your digital behavior to train AIs.

These Are The Startups Applying AI To Transform Healthcare

Machine learning and healthcare are in many respects uniquely ... how we deliver and access healthcare - Curai CEO Neal Khosla.

When AI in healthcare goes wrong, who is responsible?

Artificial intelligence can be used to diagnose cancer, predict suicide, and assist in surgery. In all these cases, studies suggest AI outperforms human doctors in set tasks. But when something does go wrong, who is responsible?

Could Artificial Intelligence Take the Art out of Medicine?

As health care becomes more complex, technological and data-driven, there’s a risk physicians will lose some of their autonomy.

AI could be a disaster for humanity. A top computer scientist thinks he has the solution

Humans care about a lot of things: fairness, law, democratic input, our safety and flourishing, our freedom. AI systems, Russell argues in Human Compatible, care about only whatever we’ve put in as their objective. And that means there’s a disaster on the horizon.

An Invisible Hand: Patients Aren’t Being Told About the AI Systems Advising Their Care

At a growing number of prominent hospitals and clinics around the country, clinicians are turning to AI-powered decision support tools — many of them unproven — to help predict whether hospitalized patients are likely to develop complications or deteriorate, whether they’re at risk of readmission, and whether they’re likely to die soon. But these patients and their family members are often not informed about or asked to consent to the use of these tools in their care...

Artificial Intelligence Is Here To Change Your Life

The revolution began before you even realized it.

China plans to dominate AI, with a vanguard of robotic doctors like 'Biomind'

China’s medical AI strategy, released a year ago, called for its use in diagnosis, surgery, health monitoring through wearable devices and other applications. In this nation’s overloaded medical system, AI is seen as a way of freeing pressured doctors from mundane tasks such as report writing, and increasing efficiency and diagnostic accuracy. Chinese hospitals analyze thousands of radiology images a day, a burden that increases the chances of misdiagnosis.

How To Democratize Healthcare: AI Gives Everyone The Very Best Doctor

When it comes to AI and healthcare, it’s actually the status quo we should be afraid of. Without these new technological tools, inequality will certainly continue getting worse. With AI, we have the potential to give everyone the best doctor, the best tests, the best analysis, anywhere in the world and at low cost – the potential to truly democratize healthcare.

How worried should we be about artificial intelligence? I asked 17 experts.

“We should take seriously the possibility that things could go radically wrong.”

Watch This AI Baby in Action

BabyX is an experimental computer generated psychobiological simulation of an infant which learns and interacts in real time. BabyX integrates realistic facial simulation with computational neuroscience models of neural systems involved in interactive behaviour and learning.

AI could help rid health care of biases. It also might make them worse

It will become harder and harder to identify automata, and I do not mean crazy-eyed dolls or local Google specialists.

An Unexpected Ally in the War with Bacteria

Scientists have struggled to develop new antibiotics. Enter the machines.

It’s impossible to read about the future of healthcare without encountering two pixilated vowels that, together, represent the hopes and fears of an industry seeking more intelligent solutions. Though the field of artificial intelligence (AI) has been around since 1956, it has made precious few contributions to medical practice. Only recently has the hype of machine-based learning begun to merge with reality.

Artificial Intelligence in Healthcare: the future is amazing

Applications of Artificial Intelligence in healthcare are endless. That much we know. We also know that we’ve only scratched the surface of what AI can do for healthcare. Which is both amazing and frightening at the same time.

Artificial intelligence won’t replace a doctor any time soon, but it can help with diagnosis

Thinking now about the interactions we will have with medical AI, the benefits of the technology, and the challenges we might face will prepare you well for your first experience with a non-human health care worker.

Baby X, The Intelligent Toddler Simulation, Is Getting Smarter Every Day

Known only as Baby X, this 3D-simulated human child is getting smarter every day.

Can a Crowdsourced AI Medical Diagnosis App Outperform Your Doctor?

The Human Dx platform aims to improve the accuracy of individual physicians.

In the booming field of artificial intelligence, cheap labor to process data may be the only edge China has over the U.S.

Google is training machines to predict when a patient will die

For all the optimism over Google’s potential, harnessing AI to improve healthcare outcomes remains a huge challenge. Other companies, notably IBM’s Watson unit, have tried to apply AI to medicine but have had limited success saving money and integrating the technology into reimbursement systems.

One of the biggest corporations on the planet is taking a serious interest in the intersection of artificial intelligence and health. Google and its sister companies, parts of the holding company Alphabet, are making a huge investment in the field, with potentially big implications for everyone who interacts with Google — which is more than a billion of us. The push into AI and health is a natural evolution for a company that has developed algorithms that reach deep into our lives through the Web.

How data scientists are using AI for suicide prevention

The Crisis Text Line uses machine learning to figure out who’s at risk and when to intervene.

If You Look at X-Rays or Moles for a Living, AI Is Coming for Your Job

Unleashing that kind of AI on the medical world's mountains of patient data could speed up diagnoses and get patients on the path to recovery much sooner. But it also promises to drastically change the job description for doctors who identify as information specialists—those whose primary tasks involve deciphering diagnoses from images. Doctors who get their MDs in image interpretation, namely pathologists, radiologists, and dermatologists, are the most vulnerable.

Machines That Will Think and Feel

Artificial intelligence is still in its infancy—and that should scare us.

The NHS is a much bigger challenge for DeepMind than Go

DeepMind’s NHS collaboration is a big test for deep learning as a field. Toys and games and fun image processing applications are all very cool, but if these techniques can’t succeed at a large-scale data-rich enterprise, with Google’s financial and technological might behind it, then investors are entitled to start asking some awkward questions, like when and where exactly can they succeed?

The Race Is On to Control Artificial Intelligence, and Tech’s Future

Many of the tech industry’s biggest companies, like Amazon, Google, IBM and Microsoft, are jockeying to become the go-to company for A.I. In the industry’s lingo, the companies are engaged in a “platform war.”

The superhero of artificial intelligence: can this genius keep it in check?

With his company DeepMind, Londoner Demis Hassabis is leading Google’s project to build software more powerful than the human brain. But what will this mean for the future of humankind?

The Three Breakthroughs That Have Finally Unleashed AI

Medicine is only the beginning. All the major cloud companies, plus dozens of startups, are in a mad rush to launch a Watson-like cognitive service.

Why You Should Legit Worry About Google's Latest Achievement

It's not all fun and games.

How AI Will Redefine Human Intelligence

Machines aren’t just infiltrating the human world, they’re altering our perception of what people can do.

For most medical professionals, artificial intelligence (AI) will be an accelerant and enabler, not a threat.

Providing the world's best healthcare to everyone. We are harnessing AI/ML to build products that empower both providers and patients.

We joined forces with Google in order to turbo-charge our mission. The algorithms we build are capable of learning for themselves directly from raw experience or data, and are general in that they can perform well across a wide variety of tasks straight out of the box.

BabyX is an interactive animated virtual infant prototype. BabyX is a computer generated psychobiological simulation under development in the Laboratory of Animate Technologies and is an experimental vehicle incorporating computational models of basic neural systems involved in interactive behaviour and learning.

Association for the Advancement of Artificial Intelligence

The Laboratory for Animate Technologies is creating ‘live’ computational models of the face and brain by combining Bioengineering, Computational and Theoretical Neuroscience, Artificial Intelligence and Interactive Computer Graphics Research. We are developing multidisciplinary technologies to create interactive autonomously animated systems which will define the next generation of human computer interaction and facial animation.

Computers are being taught to learn, reason and recognize emotions. In these talks, look for insights -- as well as warnings.

Keeps up with AI worldwide.