Where in health am I? : Home / Health Cloud / StaynHealthy / Child Health / Congenital Issues / Down Syndrome

Life is full of beauty. Notice it. Notice the bumble bee, the small child, and the smiling faces. Smell the rain, and feel the wind. Live your life to the fullest potential, and fight for your dreams - Ashley Smith 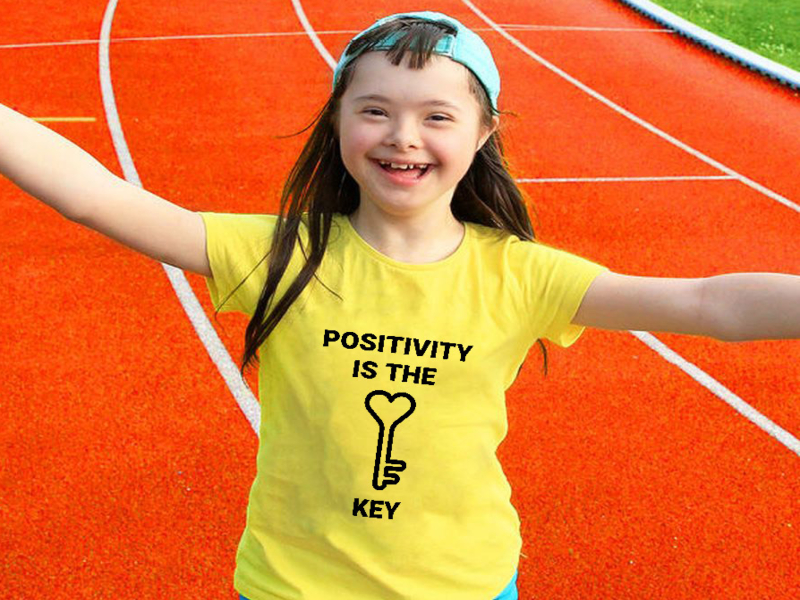 image by: Down Syndrome Awareness

A Generational Shift in Understanding Life With Down Syndrome

When I was six, my friend Tom died. My Mum took me aside when I got home from school and explained that he had gone into the hospital for routine surgery but something had gone wrong. She said it was just as well that he had died. You see, Tom had Down syndrome.

I don't mean to slander my mother. Like my father, she thought this was humane and rational -- that we should not cling to life if that life is one of terrible suffering. She was repeating the conventional wisdom of the day, and that wisdom said that if you had Down syndrome, your life was not worth living. Others who ought to have known better were often worse. In the eyes of many doctors, children with Down syndrome…

Down Syndrome and the Gift of Innocence

Living with Down syndrome is not all sweetness and light, even among nuns. The difference is that these women take this innocence, leaven the difficult and imperfect parts with love, and gift it back to the world in more sublime form through both prayer and example.

Down's syndrome has become the newest front in the abortion wars

Abortions on the basis of disability are back in the spotlight thanks to a new test for Down's syndrome during pregnancy and law changes around the world.

Recognizing the Canadian contributions to research on Down syndrome

With the exception of sperm, egg and red blood cells, each cell in our body has two copies of each of 23 chromosomes. In Down syndrome, a third copy of chromosome 21 — known as trisomy 21 — is found in each cell. Hence, the Down Syndrome Day is marked on the 21st day of the third month of each year.

My sister, Kristin, and I grew up splashing together in swimming pools, delighting in ice cream cones, and singing along to movie musicals. We were very much alike, with what we saw as a small difference: She was born with Down syndrome and I wasn’t. We’ve grown together into the people we are today, learning from each other and supporting one another. Kristin has become the checks and balances of my personal and professional lives. Whenever I am frustrated or tired by life’s hassles, Kristin’s can-do spirit .

My daughter has Down syndrome. Would I cure her if I could?

Down syndrome occurs at conception as the result of a third copy of the 21st chromosome instead of the typical pair. It affects memory and speech and learning. Most children with Down syndrome have some degree of hearing loss. Most need eyeglasses. Penny wears braces on her ankles and glasses on her button nose. She has tubes in her ears.

A Mom, A Son With Down Syndrome — And The Love That Made A 'Curse' A Gift

Joshua Myers, 29, has Down syndrome. These days, he considers it a gift — but he didn't always. "At first," he says, "I thought it was a curse."

Down Syndrome and a Death

A grand jury in Frederick County, Md., decided last week not to bring criminal charges in the death of Robert Ethan Saylor, a 26-year-old man with Down syndrome who was killed in a struggle with three off-duty county sheriff’s deputies at a movie theater in January. Advocates for people with intellectual disabilities are bewildered and furious, and it is easy to see why.

People With Down Syndrome Are Pioneers In Alzheimer's Research

When researchers at the University of California, San Diego wanted to study an experimental Alzheimer's drug last year, they sought help from an unlikely group: people with Down syndrome.

The Truth About Down Syndrome

The data indicate that people with Down syndrome, and the families who care for them, suffer less than might be supposed. And where Down syndrome does pose undoubted challenges, research into treatment options suggests that there are grounds for cautious optimism.

When I first started to work on this story, I thought maybe I shouldn’t do it. I thought you might see that I have Down syndrome, and that you wouldn’t like me. My mom thinks that’s silly. “Have you ever met anyone who didn’t like you because you have Down syndrome?” she asks me. She’s right, of course. (She usually is!)

The Frenchman credited with finding the genetic cause of Down’s is in line for sainthood. Now his colleague says it was her who made the crucial breakthrough.

With Down syndrome diagnoses comes a wrenching choice

As prenatal tests proliferate and come earlier, more couples are arriving at a medical crossroads.

A Generational Shift in Understanding Life With Down Syndrome

The change has been dramatic.

DownSyndrome Achieves takes a fresh and proactive approach toward advocacy. Along with creating a welcoming community of support for individuals and families living with Down syndrome, we're aggressively advancing research, legislation and education.

"I would give anything to have a child—even if it had Down syndrome. But I would have to decide that together with my wife, of course."

21 March 2013 marks the 8th anniversary of World Down Syndrome Day, a global awareness day which has been officially observed by the United Nations since 2012. Each year the voice of people with Down syndrome, and those who live and work with them, grows louder. But there is still so much more we can do.

To empower Canadians with Down syndrome and their families. We raise awareness and provide information on Down syndrome through the prenatal, early childhood, school years, adulthood, and retirement stages of life.

We are a not-for-profit organization founded by a group of individuals who have children or family members with Down syndrome. We believe that individuals with Down syndrome have the right to be respected as valued members of society with their own level of independence, self determination, and sense of belonging in the community.

Down Syndrome Affiliates in Action

Down Syndrome Affiliates in Action started as a conference bringing together outstanding leadership from Down syndrome organizations around the country. After consecutive years of explosive growth, the conference has extended its reach internationally and is now a 501c3 nonprofit trade association.

We work to improve early intervention and education for children with Down syndrome around the world.

We are an international charity that supports scientific research and delivers evidence-based advice and information to improve outcomes for children with Down syndrome worldwide.

We began with a small group of parents meeting occasionally and talking about how to reach other parents of children with Down syndrome. These meetings turned into much more, growing to parent and self-advocate outings, community-wide advocacy and education events, and involvement with local businesses and other organizations. Today, DSFC is a non-profit organization providing information and support to Bloomington and surrounding areas in south-central Indiana.

The Down Syndrome Information Alliance provides support and resources to empower individuals with Down syndrome, their families, and our community.

Congratulations on your pregnancy, and welcome to our community. If you have just received a confirmed or suspected diagnosis, you may be feeling very afraid, alone, and overwhelmed. We offer information that can help.

The mission of the Down Syndrome Resource Foundation is to empower individuals with Down syndrome to reach their full potential throughout life by pioneering and providing educational programs and services, disseminating information, and changing attitudes.

Author's note: I'm a pediatrician and the father of Avi, 19 years old, and Nathan, 21 years old. Avi has Down Syndrome and has inspired me to write these essays about children with DS for other parents. I have put them here for general reading. You may E-mail me with any questions about these essays. I have also included some other pediatric items of interest for parents.

We provide non-medical people in the UK with good quality information about the heart conditions associated with Down’s Syndrome and other related topics. All our information publications have been written by Down's Heart Group from a parent's perspective and as well as being evidence based, ALL items of a medical nature have been checked for accuracy by professionals in the appropriate medical field.

We are often the first point of contact for many new parents of a baby with Down's syndrome looking for information and advice, and remain a valued source of support to families as their child growns and develops.

Millions of people around the world are affected by Down syndrome everyday. Whether it's in your home, your school, or just a chance meeting with someone who looks and talks a little different from you, we're all affected in some way. Families Exploring Down Syndrome wants you to see how people with Down syndrome and their families "shine on" and how we can all help make this a better world, not only for them, but for everyone.

The Global Down Syndrome Foundation is a public non-profit 501(c)(3) dedicated to significantly improving the lives of people with Down syndrome through Research, Medical care, Education and Advocacy.

NDSS is committed to being the national leader in enhancing the quality of life, and realizing the potential of all people with Down syndrome.

Dads Appreciating Down Syndrome, or D.A.D.S., is a committee or community group (within a local Down syndrome support organization) of fathers of children who happen to have Down syndrome. We hesitate to call our self a “support group”, even though we do, in many ways, support each other.

Down Syndrome Australia is made up of State and Territory associations providing support, information and resources to people with Down syndrome and their families across the country.

Emma ~ One who Heals Sage ~ One with Great Wisdom Emma Sage is our little girl that is blessed with a little extra ~~ chromosome that is ~~ on her 21st pair.

The blog of a girl who has a brother with Down syndrome.

We accelerate research to improve health and independence for all with Down Syndrome and empower families with education, connections and support.

To promote the participation of people with Down syndrome in their community.

The Pujols Family Foundation is a national not-for-profit agency that exists to honor God and strengthen families through our works, deeds and examples. Since beginning this foundation in 2005, we have sought to help those living with Down syndrome here at home and to improve the lives of the impoverished in the Dominican Republic.

Down syndrome is a condition in which a baby is born with an extra chromosome. Chromosomes are small “packages” of genes in the body. They determine how a baby’s body forms during pregnancy and how, as the baby grows in the womb and after birth, the baby’s body functions.

Down syndrome, also called Trisomy 21, is a condition in which extra genetic material causes delays in the way a child develops, both mentally and physically. It affects about 1 in every 800 babies born in the United States.

Information, fact sheet and resources on Down Syndrome.

Indepth information regarding down syndrome, cause, research and resources.

Infomation, resources and links to infomation regarding down syndrome.

Learning about Down syndrome.

Understanding Down syndrome and other Intellectual and Developmental Disabilities is part of the reason the NICHD was established. Today, the Institute continues to lead research on the causes, progression, treatment, and management of Down syndrome, as well as on conditions and diseases that are associated with the syndrome.

The latest Down syndrome news and information.