Zolgensma’s approval, and that of Spinraza, is the beginning of a new paradigm for treating SMA and for the fight against muscular dystrophy in general. Without any treatments, SMA would remain the top genetic killer of children under 2 - Nathan Yates 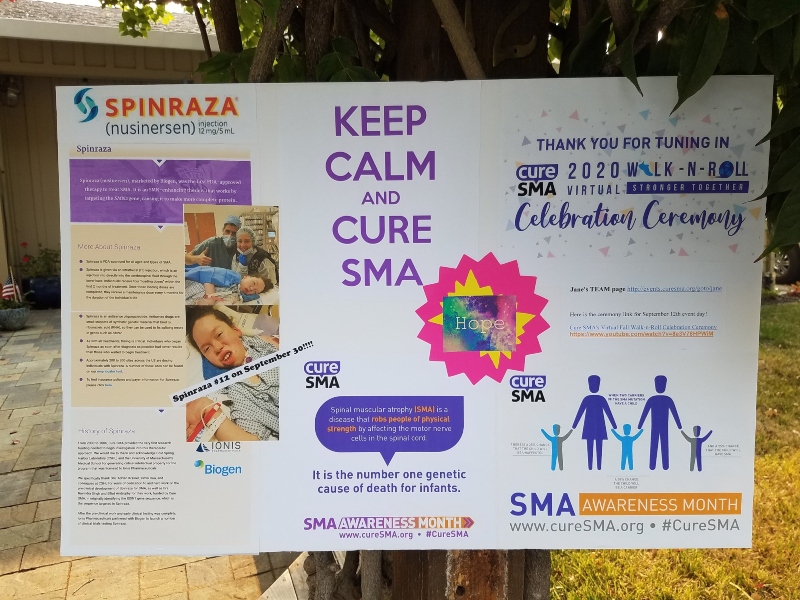 ‘It’s not a cure’: A gene therapy is opening a new chapter for children, but challenges endure

When Rachael and Pat Brown rattle off all that their daughter Kate can do, their voices are imbued with an astonishment that eclipses even the usual parental pride. Never mind that the skills might seem meager for a 3½-year-old.

Kate can pick up toys. She can scooch herself along the floor. She’s strong enough to sit and hold her head up, and that means she can join them at the dinner table and needle her older siblings. She can talk, well enough that she can ask her parents to turn on Genesis’ “Invisible Touch.”

Kate has spinal muscular atrophy, a genetic disease that causes the progressive loss of muscle function and that…

A diagnosis of spinal muscular atrophy (SMA) can be very difficult for you and your family. That’s why we are committed to evaluating potential treatment options for people with SMA. The DEVOTE study is evaluating the safety and effectiveness of different doses of a drug known as nusinersen. If you or your child is eligible and you choose to join, participation will last up to 10-14 months. All participants will receive the study drug, but some individuals may receive an investigational higher dose.

Behind the Science: SMA

Babies born with the most severe form of the muscle-wasting disease – SMA type 1 – have a life expectancy of two years. Zolgensma does not cure the disease but helps halt its progression, meaning babies breathe without a ventilator, sit up, crawl and even walk, with benefits lasting more than five years after treatment. For some babies diagnosed before developing symptoms it “might come close to being a cure”, said Meindert Boysen, the deputy chief executiveof the National Institute for Health and Care Excellence (Nice).

The ‘most expensive drug in the world’, how it works and the devastating disease it treats

Babies born with the rare, inherited motor neuron disease spinal muscular atrophy are, without treatment, unlikely to reach their second birthday. When, as a researcher in the 1990s, I became aware of the disease there were no treatments even on the horizon. Now there are two recently licensed drugs to treat this devastating affliction.

‘Maisie’s Army’: How a grassroots group is mobilizing to help toddlers access a lifesaving drug

When the family of 20-month-old Maisie Green heard late last month that their insurance company in Grand Junction, Colo., had agreed to cover a new gene therapy for her spinal muscular atrophy, they were elated. They also knew it was no accident. For two months, the family and a group of more than 700 volunteers, calling themselves “Maisie’s Army,” ran a social media campaign to convince the Greens’ insurer to overturn its decision to deny Maisie access to Zolgensma — the world’s most expensive drug at $2.1 million.

At $2.1 Million, New Gene Therapy Is The Most Expensive Drug Ever

AveXis president Lennon acknowledges the numbers might seem shocking. But he argues the drug is easily worth it. The only existing treatment for spinal muscular atrophy, a drug called Spinraza, costs hundreds of thousands of dollars a year. Zolgensma hopefully will be a one-time, life-saving treatment. "We're talking about a lifetime of benefit being condensed down into a one-time treatment," Lennon says. "We're not used to thinking about this that way. We're used to a system of a chronic medication where we spread things out over years if not decades."

At Over $2 Million Zolgensma Is The World's Most Expensive Therapy, Yet Relatively Cost-Effective

The name of the therapy is Zolgensma. It is indicated for the treatment of pediatric patients less than two years of age with spinal muscular atrophy, and bi-allelic mutations in the survival motor neuron 1 gene.

“This is a miracle — seriously,” Dr. Mary K. Schroth, a lung specialist in Madison, Wis., who treats children who have the disease, said of the approval, which was made last week. “This is a life-changing event, and this will change the course of this disease.” Dr. Schroth has previously worked as a paid consultant to Biogen, which is selling the drug. The drug, called Spinraza, will not come cheap — and, by some estimates, will be among the most expensive drugs in the world.

He Can’t Cure His Dad. But a Scientist’s Research May Help Everyone Else.

The muscle wasting disease that has debilitated Sharif Tabebordbar’s father motivated a life in science that led to an important medical discovery.

I have spinal muscular atrophy. Critics of the $2 million new gene therapy are missing the point

As someone who has lived with spinal muscular atrophy for all 30 years of my life, I was perplexed and disappointed that the recent approval of Novartis’ gene therapy Zolgensma was immediately overshadowed by outrage over the drug’s price: $2.125 million.

Nusinersen injections in adults and children with spinal muscular atrophy: a single-center experience

Spinal muscular atrophy (SMA) is an autosomal recessive neuromuscular disorder. The hallmark of SMA is progressive muscle weakness and atrophy from the degeneration and death of anterior horn cells due to homozygous mutation in the SMN1 gene...

C. Frank Bennett, the head of research at Ionis Pharmaceuticals, and Adrian R. Krainer, the St. Giles Foundation professor at Cold Spring Harbor Laboratory, will share a $3 million Breakthrough Prize for their role in developing Spinraza, a drug against spinal muscular atrophy that was invented by Ionis and is marketed by Biogen.

SMA, which stands for Spinal Muscular Atrophy, occurs in one of every 6,000 births. Commentator Ben Mattlin has a SMA and is paraplegic. He is often asked what he would do if a cure became available. His answer: He wouldn't choose to be cured.

Spinal muscular atrophy (SMA) is a neurodegenerative disease characterized by loss of motor neurons in the anterior horn of the spinal cord and resultant weakness. The most common form of SMA, accounting for 95% of cases, is autosomal recessive proximal SMA associated with mutations in the survival of motor neurons (SMN1) gene.

This Drug Will Save Children’s Lives. It Costs $2 Million

Safety, innovation and affordability need not be mutually exclusive goals for cutting-edge treatments.

This New Treatment Could Save the Lives of Babies. But It Costs $2.1 Million.

The price set by the Swiss drugmaker Novartis may be the world’s highest for a single treatment — prompting renewed debate about how society will pay for gene-therapy breakthroughs.

These findings, from responses given by hundreds of pediatricians, support a continuing need to expand SMA awareness, and a need for a more timely referral to specialists and shorter wait times, the researchers said.

Yes, S.M.A. is the No. 1 genetic cause of infant death. And the new drug, Spinraza, sold by Biogen and developed with Ionis Pharmaceuticals, will be a godsend for many. Without it, babies born with this condition, which causes debilitating muscle weakness, have only slightly better than a 50-50 chance of surviving past age 2.

‘It’s not a cure’: A gene therapy is opening a new chapter for children, but challenges endure

When Rachael and Pat Brown rattle off all that their daughter Kate can do, their voices are imbued with an astonishment that eclipses even the usual parental pride. Never mind that the skills might seem meager for a 3½-year-old.

Cure SMA is dedicated to the treatment and cure of spinal muscular atrophy (SMA).

The mission of the Spinal Muscular Atrophy Foundation is to accelerate the development of treatments for SMA.

Spinal Muscular Atrophy (SMA) is an inherited neuromuscular condition that affects the nerve cells (motor neurons) in an area of the spinal cord called the anterior horn. Because the nerves are damaged, the muscles don’t receive signals from the brain correctly and so become wasted, or atrophied. This muscle wasting can lead to problems with breathing as well as with movement (motor) activities such as crawling, sitting, walking, feeding and head control. Intelligence is not affected – indeed, many children with SMA appear to be particularly bright.

Evrysdi is the first and only at-home oral treatment for SMA. Proven to make a difference in infants, children, and adults with spinal muscular atrophy (SMA)

A treatment for children and adults with spinal muscular atrophy (SMA)

Targets the genetic root cause of SMA.

Research has focused on strategies to increase the body's production of the SMN protein lacking in the chromosome 5-related forms of the disease. Approaches include methods to help motor neurons survive in adverse circumstances.

Spinal muscular atrophy (SMA) is a group of hereditary diseases that progressively destroys motor neurons—nerve cells in the brain stem and spinal cord that control essential skeletal muscle activity such as speaking, walking, breathing, and swallowing, leading to muscle weakness and atrophy.

SMA type 0 is the most severe form of the disease and is characterized by decreased fetal movement, joint abnormalities, difficulty swallowing and respiratory failure. SMA type 1 is the most common type of SMA and is also a severe form of the disease. Infants with SMA type 1 experience severe weakness before 6 months of age and never sit independently.