Where in health am I? : Home / Health Cloud / StaynHealthy / Complementary & Alternative Health / Cupping

A placebo effect is present in all treatments, and I am sure that it is substantial in the case of cupping as well - Leonid Kalichman 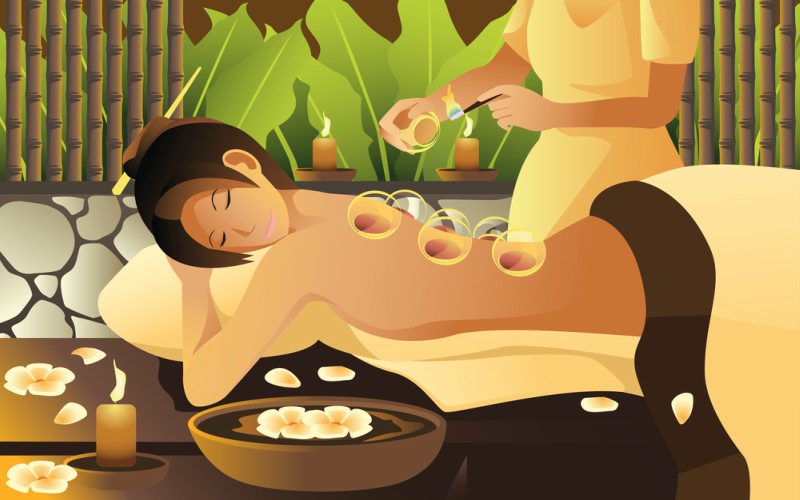 The ancient art of applying suction cups to the body has gotten a boost from several new studies that show it helps relieve a variety of painful conditions. But scientists say larger, more rigorous studies are needed.

Cupping, as the practice is called, was performed traditionally in China and other countries, and is now available from acupuncturists, and some chiropractors and massage therapists in the U.S. In the traditional method, called fire cupping, a ball of burning cotton is briefly placed inside a glass cup to heat the air inside, which then creates a partial vacuum as it cools. Newer-style plastic or silicone cups have valves that attach to hand pumps used to create suction.

Until recently, there was scant published evidence in favor of cupping for pain relief. Over the past three years, a handful of new studies have shown it helps relieve back, neck, carpal tunnel and knee pain.

There are a number of theories on how cupping may work to relieve pain. A widely held one is that suction on the skin "increases blood flow to the area and creates a mild immune response," says Kathleen Lumiere, an assistant professor of acupuncture and oriental medicine at Bastyr University in Kenmore, Wash. It also helps release fascia, connective tissue that can pull on muscles causing pain or limited motion, clinicians say.

Typically cups are on for up to 20 minutes and leave a temporary reddish mark that looks "like rare roast beef," says Brian K. Nathanson, a Norwalk, Conn., chiropractor who has been doing cupping for about five years.

Some clinicians slide the cups on the body, using them as massage tools in a technique sometimes called running cupping. "People who love deep-tissue massage love cupping," says Gabrielle Francis, a Manhattan chiropractor and acupuncturist who does both static cupping and running cupping. Both can cause mild discomfort in some patients, clinicians say.

The intrepid can opt for "wet cupping," in which the skin is punctured with a lancet before the cups are applied. The technique, which draws out a small quantity of blood, can have a powerful effect—particularly on areas where you can feel a hard lump of knotted muscles, says Kristine Tohtz, a Chicago chiropractor and acupuncturist who does wet and dry cupping.

Cost of cupping varies widely, from $40 to $100 or more for a half-hour session. It shouldn't be done on pregnant women, people with heart conditions or people with bleeding disorders, clinicians say. Caution should be used if a person has thin skin that might tear easily.

In a study of people with neck pain caused by computer use, "cupping therapy was effective in reducing pain," says Tae-Hun Kim, a researcher at the Korea Institute of Oriental Medicine in Daejeon, South Korea. The 40-person study, published online in September in the Journal of Occupational Health, found that six cupping sessions over two weeks was more effective on average in relieving pain than a heating pad—and the benefit lasted a month after treatment ended.

But, says Romy Lauche, a scientist at the University of Duisburg-Essen in Essen, Germany, "the studies are very preliminary. We cannot say it has proven its efficacy."

Dr. Lauche co-authored a 50-person study published last year that found a single wet-cupping treatment on average significantly reduced chronic neck pain three days after the treatment, compared with a control group that had no treatment. Location of the cups varied with each patient but typically was on the trapezius muscle, which spans the neck, shoulders and upper back. In unpublished results, she adds, scientists found the pain relief lasted for months.

In a 40-person German study published in October, cupping therapy significantly relieved knee arthritis pain compared with patients who received no treatment. But the study's lack of a control group treated with a sham technique "raises questions of whether it is cupping that is really working or if it has a placebo effect," says David Felson, who directs an arthritis research program at Boston University School of Medicine.

Dr. Lauche agrees that lack of a placebo control is a flaw in the studies. A new study, currently ongoing for fibromyalgia pain, is testing cupping against a sham cup that attaches with adhesive and provides minimal suction, she says.

The Art of Cupping Therapy

The cupping therapy has been used in China for thousands of years. The cupping therapy in its primitive form using cattle horn was used primarily to withdraw pus and blood in the treatment of boils. Cupping was then used as an auxiliary method in traditional Chinese surgery, and in time developed into a special therapeutic method.

The Ridiculous And Possibly Harmful Practice Of Cupping

Cupping is ridiculous. There's no scientific or medical evidence that it provides any benefit, and it clearly carries some risk of harm. A recent review in a journal dedicated to alternative medicine–one of the friendliest possible venues for this kind of pseudoscience–concluded that "No explicit recommendation for or against the use of cupping for athletes can be made. More studies are necessary."

Can Hickeys Give You the Same Therapeutic Effects As Cupping?

Anyone who has seen Olympic athletes covered in purple spots is familiar with the effects of cupping, a form of alternative medicine that uses suction to mobilize blood flow. We asked experts if you could just have a friend suck on your back for the...

Cupping at the Olympics – what is it and why do athletes use it?

Essentially there are two types: dry and wet cupping. Dry cupping involves a warm cup being placed over the skin. As the air in the cup cools it creates a suction effect which draws in the skin as the cup is placed on it. The suction is usually strong enough to create a haematoma, a swelling of blood within the tissues that is much larger than a normal bruise. As the cup normally has a circular shape, the haematoma is circular as well.

Is 'cupping' a miracle cure or the silliest celebrity health fad ever?

In his book Trick Or Treatment? Alternative Medicine On Trial, he found that despite cupping’s long history, the only controlled trial on this treatment showed no reduction in pain. He added that the fact the skin appears to be sucked into the cup as if ‘by magic’ means cupping is likely to generate an ‘above-average placebo response’. Put simply, people are fooled by the seeming wizardry of the suction action into thinking that cupping must be doing something for them. Professor Ernst says: ‘There is no good evidence that cupping helps any condition — except the dreaded condition of celebrities craving attention.’

Olympians Seem To Love It, But Is Cupping Scientifically Proven To Help With Sports Recovery?

Cupping is an ancient vacuum pressure technique. Its reports stretch back thousands of years from sources as varied as Egypt, China and Iran to Arabia (where it's called Hijama), to Europe, Korea and even Mongolia. It continues to exist outside mainstream medicine the world over...

The bruises on the swimmer’s body come from a “therapy" intended to improve blood flow. It actually causes blood to clot.

Cupping can be traced to ancient Chinese practices used ostensibly to treat a variety of ailments including arthritis and muscle soreness. There is no credible clinical evidence that cupping is anything more than a placebo — or one big hickey — with no medical benefit at all. And consider this question — did you see any of the Chinese athletes doing cupping therapy? Think about it. Perhaps if this ancient Chinese treatment really worked over millennia we might see Chinese athletes partaking of its benefits?

What Are the Purple Dots on Michael Phelps? Cupping Has an Olympic Moment

While it may look like Phelps and several other Olympians with those skin marks have been in a bar fight, the telltale dots actually are signs of “cupping,” an ancient Chinese healing practice that is experiencing an Olympic moment.

What exactly is cupping?

According to its advocates, cupping is supposed to promote healing and has been used extensively for sore muscles. But that’s only the beginning...

Centuries-Old Art of Cupping May Bring Some Pain Relief

The ancient art of applying suction cups to the body has gotten a boost from several new studies that show it helps relieve a variety of painful conditions. But scientists say larger, more rigorous studies are needed.

3 Reasons Everyone Should Try Cupping

One way to think about cupping is that it is the inverse of massage. Rather than applying pressure to muscles, the suction uses pressure to pull skin, tissue and muscles upward. I often combine cupping with acupuncture into one treatment, but it could also be used alone.

At ChineseCupping.com, you will find top quality cupping products, great service, and the best available prices.

There are several theories on the mechanisms of cupping. Skin is well vascularized – meaning it has a rich blood supply, and the applied suction has been found to increase circulation through dilating capillaries causing them to rupture – which causes the tell-tale circular bruises – and to promote lymphatic circulation.2,3 Cupping also exerts a positive effect on regulating the immune system and controlling inflammatory processes.

Cupping is a traditional Chinese medicine (TCM) practice that involves placing cups on the skin to create suction. This practice dates back over 2,000 years but has received recent attention in the media due to its use by world-class athletes for injury relief. The cups used in cupping are typically made of bamboo, glass, or earthenware.