In consciousness dwells the wondrous, with it man attains the realm beyond the material, and the Peyote tells us, where to find it - Antonin Artaud 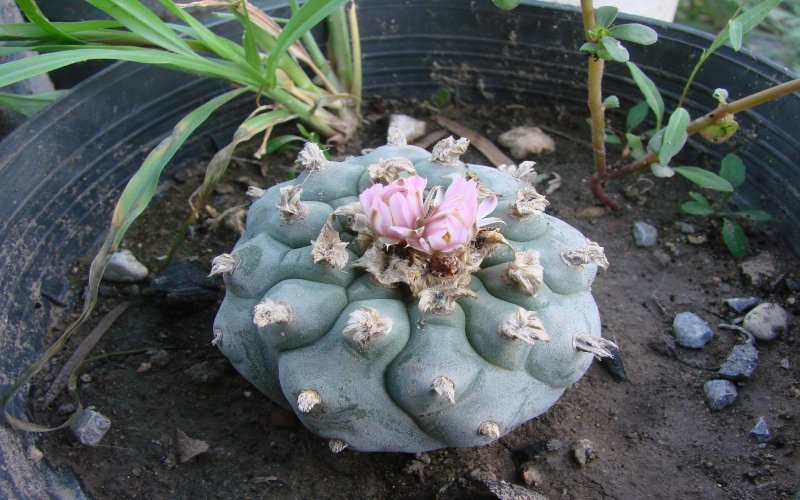 In the first study of its kind, researchers have found that peyote – for now, the only legal hallucinogenic drug in the United States – doesn't rob regular users of brain power over time.

While the findings don't directly indicate anything about the safety of psychedelic drugs like LSD and mushrooms, they do suggest that at least one hallucinogen is OK to use for months or even years.

"We really weren't able to find any (mental) deficits," said Dr. John Halpern, associate director of substance abuse research at McLean Hospital in Belmont, Massachusetts, and co-author of the study, released today in the Nov. 4 issue of the journal Biological Psychiatry. Hallucinogenic drugs…

'Crystal Fairy': Fear and Loathing on a Chilean Road Trip

Michael Cera and director Sebastian Silva on their new movie, about a South American mescaline escapade.

As Rains Ease in the West, Cactuses Shine Better than Ever

Some traditional cultures, however, cook parts of the prickly pear cactus into nopales. Others tolerate the nausea and vomiting that comes from eating the dried crowns, or “buttons,” of the peyote cactus for the sake of experiencing the hallucinatory effects of its signature ingredient, mescaline.

Down in Texas Scrub, 'Peyoteros' Stalk Their Elusive Prey

Archaeologists have found evidence of peyote's use in indigenous rituals dating back 10,000 years. "Those who eat or drink it see visions either frightful or laughable," wrote Fray Bernardino de Sahagun, a 16th-century chronicler. Spanish priests, for the most part, tried to stamp out its use. Mexican colonial records yield as many as 90 cases where the Spanish Inquisition brought charges ranging from heresy to witchcraft against peyote users.

Mescaline occurs naturally in the peyote cactus (Lophophora williamsii), which it is has strong historical and cultural associations with, although it is produced in a number of other cacti species such as the San Pedro cactus (Echinopsis pachanoi, the Peruvian torch (Echinopsis peruviana) among the Cactaceae plant and the Fabaceae bean family as well. It was first isolated and identified in 1897 by the German chemist Arthur Heffter and first synthesized in 1919 by Ernst Späth.

My first trip EVER and on Peyote

After all we half woke up from the trip and I clearly noticed that my perception has changed.It was the best experience of my life and I'm surely going to do this again. All hail the Peyote snake and Azarius.

Peyote Effects: A Train To Take You To Another World

The chemical structure of mescaline resembles that of dopamine and norepinephrine and the drug acts on their receptors in the brain and produces effects by disturbing normal neurotransmitter activity. Its effects last for 1-2 hours and disappear after 10-12 hours.

Peyote on the Brain

John Halpern's peyote study is part of a revival of psychedelic research. At least a half dozen prominent researchers are exploring the potential of using hallucinogens...

Recollections of the Peyote Road

My thoughts about Peyote are closely interwoven with the religious context of the Native American Church, the Peyote religion of the American Indian. In my experiences with this sacred plant...

Tripping on Peyote in Navajo Nation

A journalist exploring psychedelics’ therapeutic potential participates in a ceremony of the Native American Church.

Will peyote be next for Supreme Court?

Justices to discuss status of religious sect that uses the drug in rituals.

In the first study of its kind, researchers have found that peyote – for now, the only legal hallucinogenic drug in the United States – doesn't rob regular users of brain power over time.

The primary focus of the Lophophora Blog is small Mexican cactus species like Lophophora (peyote), Obregonia (artichoke cactus), Acharagma, Ariocarpus (living rock), and Strombocactus but occasionally other subjects will be dealt with as well.

Peyote has been the source of much controversy ever since European explorers encountered it during the 16th century. Today, recreational use of the drug is prohibited. Peyote use is exempted in the context of religious ceremonies conducted by the Native American Church. If you are interested in taking an objective look at peyote and its history, cultural use and health implication, you will find a wealth of information here.

Ever since the arrival of the first Europeans in the New World, Peyote has provoked controversy, suppression, and persecution.

Peyote are endangered in the wild, being threatened by misguided folk who dig them up and ingest them just to get high. Save these wonderful plants from exploitation and possible extinction. See how you can help with the conservation of this wonderful species by starting your own colony on a sunny windowsill.

Peyote is a small, spineless cactus that contains mescaline as its primary active chemical. It has a long history of use among the natives of northern Mexico and SW United States.

Peyote, a small spineless cactus (Lophophora williamsii), has been used for many years for its hallucinogenic properties. The plant contains mescaline, the main active ingredient, which produces the hallucinatory effect

Peyote is a psychoactive alkaloid that comes from a small cactus that grows wildly in the Chihuahuan Desert. The cactus can be found in areas of Texas and Mexico and is common among scrub where there is limestone settlement. This plant, particularly the mescaline within the plant, can produce a wide range of effects including deep insight into one’s spiritual side. Auditory and visual hallucinations are also common with the use of Peyote.