Where in health am I? : Home / Health Cloud / StaynHealthy / Cosmetic Surgery / Botox

I'll take my wrinkles. I don't like the Botox thing - Gwyneth Paltrow 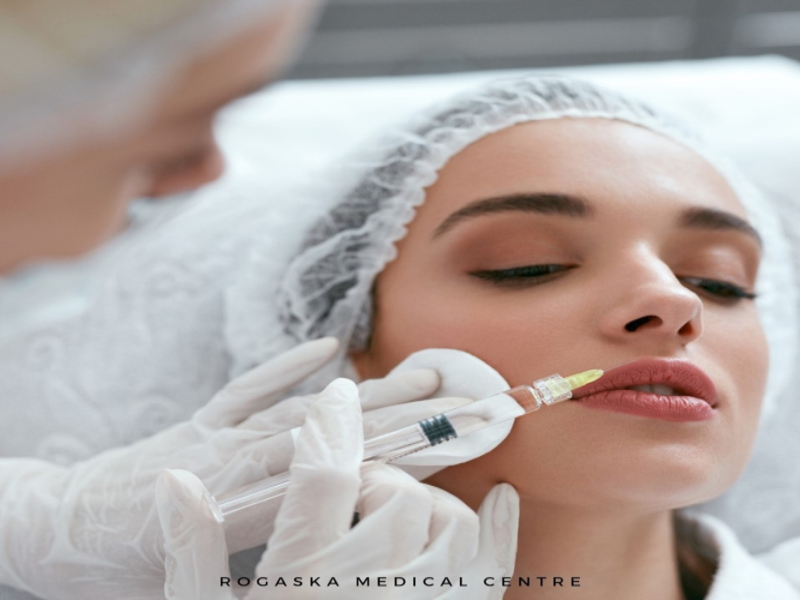 Why I Don't Want Botox Needles Sticking Into My Face

Many women have regular Botox injections in an attempt to reduce the appearance of fine lines and wrinkles. From what I've seen, the results are amazing. Wrinkles disappear and the women look younger. But you won't find my face on the other end of any Botox needles.

I want to look as young as possible now that I am no longer young. But I also find it useful to be able to register anger with a facial expression, especially because my 10-year-old black lab is somewhat deaf. I need to be able to communicate with facial expressions and wild hand gestures that digging up the garden makes me angry. Being able to look unimpressed when the child comes home with a lackluster grade on her…

Are You Ready for Drive-Thru Botox?

A new wave of beauty bars aims to make injectables as easy as a Drybar blowout.

New pricing and new claims to longer-lasting effects from Botox competitors could entice beauty treatment customers to try something new.

The Unsung Story Of Botox Is About Much More Than Botox

The factory in which Botox is produced in Westport employs roughly 1,200. This is notable from a trade perspective when we remember that what’s created at Allergan’s plant “travels to 96 countries around the world.” Think about that for a minute, and then think about this odd focus on “trade deficits” among politicians. Applied to Botox, well-to-do people spanning the globe run a “trade deficit” with Allergan’s Westport plant and its 1,200 workers, but few would presume that these unassuming workers are “ripping off” a global customer base that includes models, movie stars, millionaires and billionaires.

An Inside Look at the Legendary Botox Factory in Westport, Ireland

I will bet you a lot of dollars that you can’t guess where Botox comes from. A crystal-encrusted vat wreathed in liquid nitrogen and buried underneath the Hollywood Hills? Nice try! But no. A concrete bunker in the Arizona desert encircled by barbed wire and tumbleweed? I see where you’re going, but not even close. I have been to the place that produces the entire planet’s supply of the wrinkle-smoothing, brow-raising drug...

Botox: The Good, The Bad, The Ugly

As with anything, know your facts before undergoing any beauty treatment or procedure. When it comes to beauty, knowledge is the power that allows us to weigh risk versus benefit. While there are some risks with Botox, it can be one of the most powerful weapons in your beauty arsenal that will keep everyone wondering how you always look so youthful and fresh.

Fill Me In: How Botox Became a Beloved Toxin

From its origin as a deadly toxin in fast food, to a polarizing beauty procedure, to a miraculous migraine cure, botulinum toxin has come a long way.

The Creator of Botox Never Cared about Wrinkles

He invented it to treat strabismus; it's now used for everything from migraines and chewing problems to drooling, hair loss and urinary incontinence.

The Guide To Getting Good Botox

Botox: Everybody's getting it, but nobody's talking about it. Which is unfortunate because A) culture of shame much? and B) the dearth of information leads to a lot of no good, very bad facial freezing, and time wasted wishing eyebrows would even out again. Which is why I asked four doctors who specialize in the field for the truth about making Botox last longer, how to avoid looking like Kim Cattrall pre-transformation in Mannequin, tips to minimize bruising, and other good stuff.

Why Darwin Would Have Loved Botox

I don’t mean that he would have been first in line at the doctor’s office to get a needle jabbed into his famously furrowed brow. I mean that Darwin would have loved to use Botox as a scientific tool—to eavesdrop on the intimate conversation between the face and brain.

And You Thought Botulism Was a Bad Thing?

Most of us first heard of the botulinum toxin being used to treat wrinkles. We knew it was a form of botulism, but we didn't care - it temporarily turned back the clock (or cloak if you will) of time. Botox may make you pretty but can it make you healthier?

Growing up, we didn't talk about that kind of thing. It would have been considered scandalous. I was raised to believe that God had certain plans and expectations for me as a woman, and to err from that path would be sinful. But as I became worldlier and met others who had tried it, my curiosity grew. I found myself inexplicably drawn to its adherents, feeling queasy yet titillated as I heard their stories. Maybe it wasn't as unnatural and self-destructive as I'd long believed. I'm talking, of course, about Botox. I admit it: I'm Bo-curious.

What is most surprising about people who get Botox is just how common it is across all demographic groups. I treat everyone from models, actors, and CEOs to waitresses, secretaries, and teachers. Surprisingly, there is still somewhat of a stigma associated with getting Botox, even though there shouldn't be.

But this isn't the first time the anti-wrinkle cosmetic is steering its image away from a parlor game involving aging Hollywood beauties, pols, and wannabe "real" housewives from New Jersey. The therapeutic uses from this formerly controversial cosmetic derived from a deadly neurotoxin continue to grow. Multiple injections around the head and neck are expected to help minimize migraines for up to three months...

It's the most popular cosmetic treatment in the United States, but Botox continues to inspire fear and confusion in certain cautious corners. (And, OK, millions of dollars' worth of admiration.) Is it right for you? That depends on your taste, pocketbook, and tolerance for needles. We explain all.

Looking Depression In the Face: Botox as Antidepressant

In a peculiar about-face, psychiatry has taken a page from the aesthetician's playbook. Recent research suggests that the frown of depression is anything but superficial and should not be taken at face value. Wiping that expression off your face is the latest treatment for depression. And Botox, America's favorite neurotoxin, allows for this therapeutic loss of face.

Over the last decade, Botox has become a synonym for the eradication of wrinkles, a kind of shorthand for the entire enterprise of cosmetic medicine. But now, with the popularization of new medical uses, therapeutic applications of the drug are poised to outstrip the cosmetic treatment in both revenue and prominence.

The Difference Between Botox and Facial Fillers

Sick of deep lines on your face? Wishing you could get a quick fix for the signs of aging around your mouth and eyes? You may think that Botox is your only option, but in fact there are other injectable cosmetics that plastic surgeons use to treat some lines on the face. That's why it's important for individuals to understand the difference between injectables like Botox and facial fillers, like Juvederm.

Minimally invasive procedures, from thread and liquid lifts to body contouring and facial rejuvenation, have moved the traditional facelift to the back of the bus. And it doesn't cost an arm or a leg.

Why I Left The Botox Party

"To Botox or not to Botox?" I pondered that night while staring in the mirror and counting my creases. Sure, at 53, I could use a spring-cleaning but maybe there was just a pinprick to be had, a "Botox booster." And then I remembered my grandmother Elizabeth's immortal words, "Every one has the face they deserve." But what did that mean? She lived to be 104 and never saw a dermatologist.

Why I Don't Want Botox Needles Sticking Into My Face

Many women have regular Botox injections in an attempt to reduce the appearance of fine lines and wrinkles. From what I've seen, the results are amazing. Wrinkles disappear and the women look younger. But you won't find my face on the other end of any Botox needles.

10 reasons NOT to get Botox

Cosmetic injectables used to be just for movie stars, but now they have gone decidedly mainstream. Considering a little jab? Read this list first.

BOTOX Cosmetic is a simple, nonsurgical, physician-administered treatment that can temporarily smooth moderate to severe frown lines between the brows in people from 18 to 65 years of age. It is the only treatment of its type approved by the Food and Drug Administration (FDA).

Botulinum type A injections are by far the most popular cosmetic treatments preformed nationwide, helping millions fight wrinkles & rejuvenate their appearance. Our guide to Botox-type injectables will help you learn more about this popular treatment, giving you the info you need to make the right choice.

The most common uses for Botox is smoothing of the facial wrinkles of the forehead, between the eyes (glabellar region) and around the corners of the eyes (crow’s feet). These are the most common cosmetic uses that have put Botox on the esthetic map.

Millions or people want to get rid of those fine lines or crow’s feet around their eyes. In the medical cosmetology field, there is a substance known as Botox which is made of bacteria that develops in smoked meats and it can be injected into the skin to smooth out wrinkles on a person’s face. The Botox relaxes the muscles that create the creasing of skin over time. In the interactive procedure, who is an ideal candidate for Botox injections and what the possible side effects may be. We will go over the recovery time, and how long the results may last. Scrub in and let’s get started!

The effects of a Botox injection are temporary. Your symptoms may return completely within 3 months after an injection. After repeat injections, it may take less and less time before your symptoms return, especially if your body develops antibodies to the botulinum toxin.

Noted primarily for the ability to reduce the appearance of some facial wrinkles, Botox injections are also used to treat such problems as repetitive neck spasms (cervical dystonia), excessive sweating (hyperhidrosis), overactive bladder and some causes of crossed eyes. Botox injections may also help prevent chronic migraines in some people.

Botox is a brand name of a toxin produced by the bacterium Clostridium botulinum. There are other brand names for botulinum, such as Xeomin. In large amounts, this toxin can cause botulism, which you probably associate with food poisoning. Despite the fact that one of the most serious complications of botulism is paralysis, scientists have discovered a way to use it to human advantage.

Botox is a drug made from a toxin produced by the bacterium Clostridium botulinum. It's the same toxin that causes a life-threatening type of food poisoning called botulism. Doctors use it in small doses to treat health problems...