Where in health am I? : Home / Health Cloud / StaynHealthy / Drink / Water / Fluoridation

Fluoridation is the greatest case of scientific fraud of this century, if not of all time - Robert Carton, Ph.D. former US EPA scientist 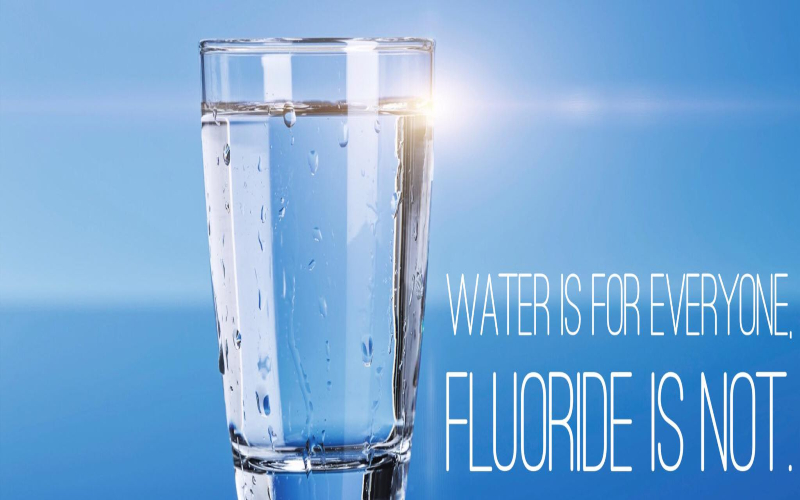 For many of us, water fluoridation is a matter of everyday experience, and we generally take its presence in our drinking water and its value in cavity prevention for granted. The first public water fluoridation occurred in the U.S. in 1945. Today, 67 percent of American communities have public fluoridated water systems. In fact, water fluoridation has spread thruout most of the developed world and is considered one of the ten greatest public health interventions of the twentieth century.

Is Fluoride in Drinking Water Safe? A New Study Reignites a Long-Standing Debate

A study published in JAMA Pediatrics has given new life to a long-running debate: whether adding fluoride to drinking water is a prudent way to prevent tooth decay, or a potentially toxic mistake. The research, which focused on mother-child pairs from six Canadian cities, found that high fluoride exposure during pregnancy was correlated with lower IQ scores among young children, especially boys.

Despite its many weaknesses, this study is likely to confuse or scare parents who have heard about its result — many of whom may be unaware of the concerns about the research voiced by the scientific community. Sadly, even flawed research papers can have negative long-term impacts, especially when they are published by reputable journals.

The Fluoride Debate: The Pros and Cons of Fluoridation

This paper reviews the different aspects of fluoridation, their effectiveness in dental caries prevention and their risks. It was performed in the PubMed and the Google Scholar databases in January 2018 without limitation as to the publication period.

Eighty Years Of Conflicting Data: What The Fluoride-IQ Debate Tells Us About Public Health

But what made this finding exceptionally provocative is that fluoride is in public drinking water. Meaning, more than 200,000 million Americans...

Water fluoridation is a controversy that just doesn’t seem to go away, despite the overwhelming evidence of successfully reducing the rate of cavities in children (and adults), while also having little or weak evidence that there are any risks.

Adding fluoride to water supplies to prevent dental caries is controversial. K K Cheng, Iain Chalmers, and Trevor A Sheldon identify the issues it raises in the hope of furthering constructive public consultation and debate.

Americans Have Been Overdosed On Fluoride In Drinking Water

Are The Concerns About Water Fluoridation Legit?

The bottom line is that if you want to build a case against water fluoridation — and, apparently, many people do — it is possible to do so. But the case is weak. The risks are small, and the public health benefits are big. The evidence simply doesn’t favor stopping this practice, nor does it favor blocking it from starting — unless that’s the mind control talking.

Does Adding Fluoride To Water Have Any Side Effects?

What are the proven side effects of drinking water containing fluoride? Like all things, it depends in the dose. Fluoride is a naturally occurring component of drinking water (and tea leaves), and humans noticed early in history that people drinking some waters were healthier than others: their teeth were better.

Fluoride in Drinking Water: A Review of Fluoridation and Regulation Issues

The fluoridation of drinking water often generates both strong support and opposition within communities. This practice is controversial because fluoride has been found to have beneficial effects at low levels and is intentionally added to many public water supplies; however, at higher concentrations, it is known to have toxic effects. The Environmental Protection Agency (EPA) regulates the amount of fluoride that may be present in public water supplies to protect against fluoride’s adverse health effects.

Fluoride: Just when you thought it was safe to drink the water...

A public health body is once again campaigning for councils to add fluoride to our drinking water. But the science in favour is not as clear-cut as it seems...

There’s nothing like a glass of cool, clear water to quench one’s thirst. But the next time you or your child reaches for one, you might want to question whether that water is in fact, too toxic to drink. If your water is fluoridated, the answer may well be yes.

It’s In The Water: The Debate Over Fluoridation Lives On

Many people take for granted the addition of fluoride into public drinking water systems that aims to prevent tooth decay. It’s a seven-decade-old public health effort. But it’s not nearly as universally accepted as one might think.

People living in areas where water fluoridation schemes are in place are less likely to have tooth decay than those in other regions, according to a Public Health England (PHE) report.

In the 1950s, after health authorities began fluoridating U.S. water supplies, they faced opposition from groups like the John Birch Society, which called it "an unconstitutional mass medication of the public." Sixty years later, the fight over fluoridation has erupted in Portland, where the battle has drawn in the city's craft-beer brewers, organic-food purveyors and environmentalists. Even some of the city's famed indie-rock musicians are taking sides.

Most Americans drink fluoride every day as part of what critics refer to as an involuntary mass-medication program. Organized dentistry argues that it is good for children’s teeth. However, according to a recent report in one of the world’s most prestigious medical journals, the industrial chemical added to water supplies across much of the United States is actually a dangerous developmental neurotoxicant.

What Do We Know About Fluoride?

Earlier this year, officials in Pinellas County in Florida decided to remove the cavity-fighting chemical from its water supply. Was it a mistake?

Why You (Still) Shouldn't Worry About Fluoridated Drinking Water

Note too that since fluoridation has been proven safe decades ago, there is no need for new studies, any more than we need new studies proving the Earth is round. The facts haven’t changed. But conspiracy theories never get forgotten while facts do, so in all such cases of fiction vs science (creationism, flat earthers, antivaxxers, antifluoriders, etc.), those who speak truth need to constantly re-educate people. Fear persists longer and spreads farther than truth.

Four myths about water fluoridation and why they’re wrong

Evidence gathered over 60 years about adding fluoride to drinking water has failed to convince some people this major public health initiative is not only safe but helps to prevent tooth decay. Myths about fluoridated water persist. These include fluoride isn’t natural, adding it to our water supplies doesn’t prevent tooth decay and it causes conditions ranging from cancer to Down syndrome.

Hundreds of research articles published over the past several decades have demonstrated potential harm to humans from fluoride at various levels of exposure, including levels currently deemed as safe.

The Campaign for Dental Health (CDH) was created to ensure that people of all ages have access to the most effective, affordable and equitable way to protect teeth from decay — water fluoridation. The CDH is a broad network of oral health advocates, health professionals, child and family organizations, and scientists who are working together to preserve our nation’s gains in oral health. It is our mission to provide the public and policy makers with the evidence-based information and tools they need to promote and protect this important public health measure.

Fluoride Facts: Sources, Exposure and Health Effects... Sources of human exposure to fluoride have drastically increased since community water fluoridation began in the U.S. in the 1940’s. In addition to water, these sources now include food, air, soil, pesticides, fertilizers, dental products used at home and in the dental office, pharmaceutical drugs, cookware (non-stick Teflon), and an array of other consumer items used on a regular basis. Most people are not aware of important fluoride facts about these sources. Exposure to fluoride is suspected of impacting nearly every part of the human body, and the potential for harm has been clearly established in scientific research.

The Society is an independent non-profit organization which promotes the sharing of scientific research on all aspects of inorganic and organic fluorides by hosting international conferences on fluoride research and publishing quarterly, online (ISSN2253-4083) and in print (ISSN 0015-4725), the open access journal Fluoride: Quarterly Journal of the International Society for Fluoride Research Inc.

Why does HHS think that 0.7 milligrams per liter is appropriate? HHS has reviewed extensively the scientific literature on the relationship between fluoride and oral health. The optimal level of fluoride in drinking water provides enough fluoride to prevent tooth decay in children and adults while limiting the possibility for children to develop dental fluorosis in teeth that are forming under the gums.