Where in health am I? : Home / Health Cloud / StaynHealthy / Drink / Water / Seawater & Desalination

How much salt water thrown away in waste/ To season love, that of it doth not taste - William Shakespeare 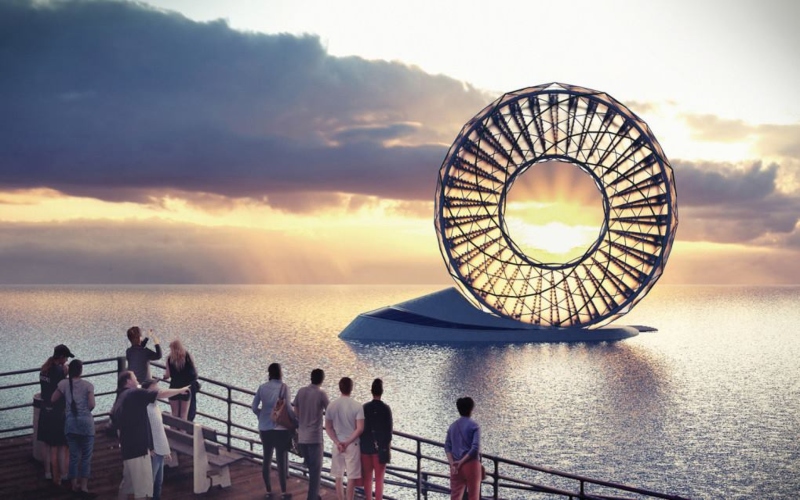 Most people on Earth get fresh water from lakes and rivers. But these account for only 0.007% of the world’s water. As the human population has grown, so has demand for fresh water. Now, two out of every three people in the world face severe water scarcity at least one month a year.

Other water sources – like seawater and wastewater – could be used to meet growing water needs. But these water sources are full of salt and usually contain such contaminants as toxic metals. Scientists and engineers have developed methods to remove salts and toxins from water – processes called desalination. But existing options are expensive and energy-intensive, especially because they require a lot of steps. Current desalination techniques also create a lot of waste – around half of the water fed into some desalination plants is lost as wastewater containing all of the removed salts and toxins.

I am a doctoral student in chemical and biomolecular engineering and part of a team that recently created a new water-purification method that we hope can make desalination more efficient, the waste easier to manage and the size of water treatment plants smaller. This technology features a new type of filter that can target and capture toxic metals while removing salt from water at the same time.

To build a single filter that could both capture metals and remove salt, my colleagues and I first needed a material that could remove many different contaminants – mostly heavy metals – from water. To do this, we turned to tiny, absorbent particles called porous aromatic frameworks. These particles are designed to selectively capture individual contaminants. For example, one type of absorbent particle can catch only mercury. Other types specifically remove only copper, iron, or boron. I then embedded these four different types of particles into thin plastic membranes, essentially creating custom filters that would capture contaminants according to the type of particle I put in the membrane.

A colleague and I then placed these membrane filters into an electrodialysis water purifier. Electrodialysis is a method that uses electricity to pull salts and toxins out of water, across a membrane and into a separate waste stream. This waste – often called brine – can become toxic and expensive to dispose in existing desalination processes.

In my team’s modified process, called ion-capture elecrodialysis, our hope was that the membranes packed with the tiny metal-absorbing particles would capture toxic metals instead of allowing them to move into the brine. This would achieve three benefits at the same time in an energy-efficient manner: Salts and metals would be removed from the water; the toxic metals would be captured in a small, easily disposable membrane – or even potentially be reused; and the salty waste stream would be nontoxic.

How effective is ion-capture electrodialysis?

Once our team had successfully made these membranes, we needed to test them. The first test I ran used membrane filters embedded with mercury-capturing absorbents to purify water from three sources that contained both mercury and salts: groundwater, brackish water and industrial wastewater. To our team’s excitement, the membranes captured all the mercury in every test. Additionally, the membranes were also great at getting rid of salt – over 97% was removed from the dirty water. After just one pass through our new electrodialysis machine, the water was perfectly drinkable. Importantly, further experiments showed that no mercury can pass through the filter until nearly all the absorbent particles in the filter are used up.

My colleagues and I then needed to see whether our ion-capture electrodialysis process would work on other common harmful metals. I tested three membrane filters that contained absorbents for copper, iron or boron. Every filter was a success. Each filter captured all of the target contaminants without any detectable amount passing into the brine, while simultaneously removing over 96% of salts from the water, purifying the water to usable conditions.

Our results show that our new water purification method can selectively capture many common contaminants while also removing salt from water. But there are still other technological challenges to figure out.

First, the highly selective absorbent particles – the porous aromatic frameworks – that my colleagues and I mixed into the membrane are too expensive to put into mass-produced filters. It is probably possible to place cheaper – but lower-quality – absorbents into the filters instead, but this might worsen the water purification performance.

Second, engineers like me still also need to test ion-capture electrodialysis on scales larger than those used in the laboratory. Issues can often come up in new technologies during this transition from the laboratory into industry.

Finally, water treatment plant engineers would need to come up with a way to pause the process right before the membrane absorbents are maxed out. Otherwise, the toxic contaminants would start to leak through the filter into the brine wastewater. The engineers could then restart the process after replacing the filter or after removing the metals from the filter and collecting them as separate waste.

We hope our work will lead to new methods that can efficiently and effectively purify water sources that are more abundant – yet more contaminated – than fresh water. The work really is worth it. After all, the effects of water scarcity are gigantic, on both a social and worldwide level.

Is there a beautiful, briny solution to the world’s clean water crisis?

Desalination is often dismissed as being expensive and polluting. But advances in tech are putting it back on the agenda.

Having Your Desalination and Eating It, Too

A small-scale experiment shows that brine waste from desalination can be turned into fertilizer for hydroponic plants.

If we don’t want to run out of water, we should look to the sun

Next generation solar technology could drive down the cost of scrubbing salt from seawater.

The Motion of the Ocean: Using Sea Waves to Desalinate Seawater

This novel technology, aptly called Wave2O, harnesses wave energy to power a reverse-osmosis desalination system. Complicated as it may sound, reverse osmosis desalination is simply a way of filtering water through a membrane that removes salt and other unwanted particles.

'The salt they pump back in kills everything': is the cost of Chile's fresh water too high?

Despite the clear necessity for a reliable water source, concerns over the ecological impacts of desalination observed by Muñoz have followed quickly behind the implementation of the technology.

Desalination Is Booming. But What About All That Toxic Brine?

As Water Scarcity Increases, Desalination Plants Are on the Rise

After decades of slow progress, desalination is increasingly being used to provide drinking water around the globe. Costs for processing salt water for drinking water have dropped, but it remains an expensive option and one that creates environmental problems that must be addressed.

California hopes saltwater will help to quench its thirst

It seems simple enough: Take the salt out of water so it’s drinkable. But it’s far more complex than it appears at first glance. It’s also increasingly crucial in a world where freshwater resources are progressively strained by population growth, development, droughts, climate change, and more. That’s why researchers and companies from the United States to Australia are fine-tuning a centuries-old concept that might be the future of quenching the world’s thirst.

Producing fresh drinking water from the sea - desalination - has always seemed to be the most obvious answer to water shortages. Our oceans cover more than 70% of the earth's surface and contain 97% of its water. But the energy needed to achieve this seemingly simple process has been costly. Now, thanks to new technologies, costs have been halved and huge desalination plants are opening around the world.

Cities turn to desalination for water security, but at what cost?

Modern industrial-scale desalination uses reverse osmosis to remove salt and other impurities from sea water. Water is forced under high pressure through a series of membranes through which salt and other impurities cannot pass. Design, construction and maintenance costs of these industrial plants are high. They also use massive amounts of electricity, which increases greenhouse gas emissions unless renewable energy sources are used. Another concern is the return of the excess salt to the environment.

The world’s desalination plants, which use energy intensive processes to remove salt from water, produce enough toxic brine each year to cover all of Florida under a foot of water.

Growth of desalination plants is a serious problem for marine life

Most of this brine ends up in the sea. In calm conditions, the dense brine can spread out over the sea floor and kill organisms by increasing salinity beyond what they can tolerate, says Callum Roberts at the University of York, UK. The brine is also contaminated with toxic chemicals used to stop sea life clogging pipelines.

The early 1960s were a time when there seemed to be no problem so big that American technology couldn’t conquer it, including the eternal threat of drought. The solution seemed simple: build industrial plants capable of generating fresh drinking water from a limitless source–the sea.

The World Can Make More Water From the Sea, but at What Cost?

Worldwide, desalination is increasingly seen as one possible answer to problems of water quantity and quality that will worsen with global population growth and the extreme heat and prolonged drought linked to climate change.

Water: The miracle molecule that does it all

By 2025, half of the world’s population will be living in water-stressed areas. DuPont Water Solutions is currently helping to solve this global crisis by addressing the most intractable water challenges with proven and reliable solutions that can improve the quality of life within communities-and in general—keep the clean water flowing. Here are some surprising ways that smart people are making water safer and more accessible for everyone.

A new way to remove salts and toxic metals from water

Most people on Earth get fresh water from lakes and rivers. But these account for only 0.007% of the world’s water. As the human population has grown, so has demand for fresh water. Now, two out of every three people in the world face severe water scarcity at least one month a year. Other water sources – like seawater and wastewater – could be used to meet growing water needs. But these water sources are full of salt and usually contain such contaminants as toxic metals.

As our population grows, so does demand for natural resources. Large-scale desalination may be the solution to sustainable drinking water.