Thoughts, like fleas, jump from man to man, but they don't bite everybody - Stanislaw Lec 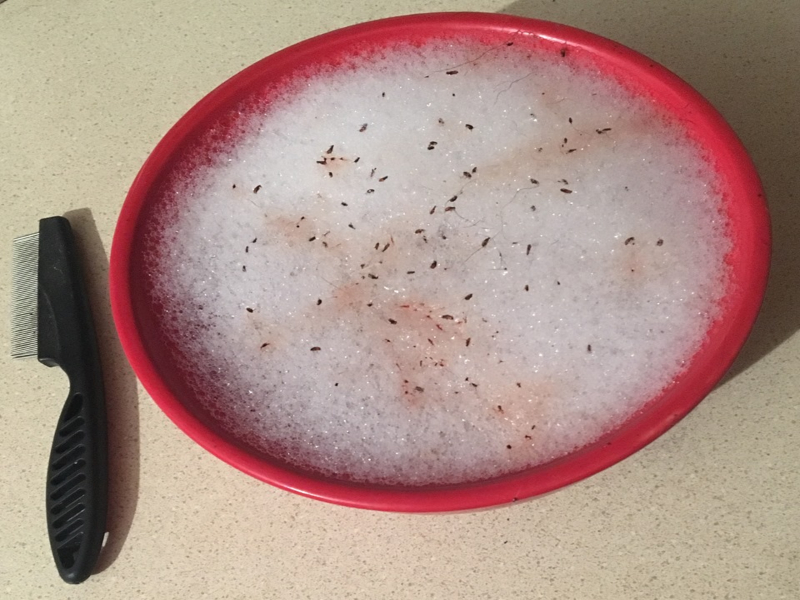 How much do you know about fleas and ticks? Take this short quiz to make sure you know the facts so you can protect your dog from these pests..

3. Which of the following conditions can be caused or transmitted by fleas? A. Flea Allergy Dermatitis (FAD) B. Tapeworm Infection C. Roundworm Infection D. Both A and B

4. Ticks are only a concern in warmer months. A. True B. False

5. Which of the following diseases are transmitted to dogs by ticks. A.…

Fleas are wingless, blood-sucking parasites that are notorious for the irritation they cause us and our pets. Even though fleas are typically more interested in our furry friends than people, flea bites on humans are not uncommon. It's a fairly accepted fact that if you're a pet owner, you're probably going to experience a flea bite at some point in time.

Oh Fleas, Now There Is A Typhus Outbreak In Los Angeles

Now here's the poop. You can get typhus when a flea carrying the bacteria bites you or infectious flea poop gets rubbed into breaks in your skin or mucous membranes like your eyes. Fleas typically don't use tiny little toilets when they go Number 2. They can just "bust a grumpy" right on your skin. As if that weren't rude enough, they can bite you at the same time so that the poop gets rubbed into your wound, allowing whatever bacteria is in their poop to access your bloodstream. Biting you and pooping on you are not the marks of good guests, in most cases.

An Oregon teenager was just diagnosed with bubonic plague. Here's what you need to know.

The disease is caused by the bacterium Yersinia pestis, which spreads like this: Wild rodents — chipmunks, mice, squirrels — can carry the bacteria. The fleas that live around them feed on them and pick up the bacteria, spreading it to other mammals they bite, including humans. People typically get plague when they're bitten by an infected flea — which is exactly what happened in Oregon.

How to get rid of fleas

When the leaves start to turn, fleas suddenly seem to show up everywhere. If they establish a beachhead inside your home, you’ll have much more trouble getting rid of them. Here’s how to keep the biting bugs off your turf.

L.A. typhus outbreak adds fuel to the debates over homelessness and housing

Typhus outbreaks are often associated with poor hygiene and overcrowding. Los Angeles officials say they’re corralling stray animals that could carry fleas, cleaning streets and encouraging people to treat their pets for fleas and put away trash that may attract infected animals.

Pet owners spend billions of dollars every year to prevent (or destroy) fleas on their fuzzy loved ones, but new research shows that cats and dogs spread their parasites to wild animals around the world.

Fleas are marvellous creatures! They are ectoparasites (parasites that live outside their hosts’ bodies), exploiting their hosts both by using them for nutrition and to stay well protected from the harsh outside environment beyond their host’s fur. Big fleas even have little “fleas” of their own as well, but more on that a little later.

A Plague and a Blessing in My Empty Nest

A week before I took my only daughter to college in another state this fall, our house became infested with fleas. Combined with the impending sense of child loss, it felt like a biblical plague. Bites accumulated around our ankles and feet, and on me at least, seemed to work their way up further every night toward my neck. By the time I dropped her off, we were both riddled with the raised itchy bumps that we have a shared penchant for scratching raw.

There are several ways to kill or discourage fleas. Some are synthetic chemicals, some are considered "natural", and both work with varying degrees.

Bubonic plague cases are on the rise in the US. Yes, really.

Plague is caused by a bacteria carried by rodents and fleas.

Dealing with Fleas and other parasites

The most important thing to know about fleas is that for every adult flea you find on your pet, there will be hundreds of larvae, thousands of pupae, and many thousands of eggs lying hidden in your home and/or yard. That means that killing a few adult fleas with a flea comb or a spray ... no matter how satisfying ... will do little to solve your flea problem.

The most common canine pest, the flea is actually a marvel of adaptability that would be much admired if they weren't so pesky. However, since they often carry tapeworms, can cause severe itching and even allergy, and often bite humans, their jumping and survival talents are reviled instead of revered.

How Did Two Yosemite Park Campers Catch the Plague?

The most common type of plague, bubonic, can't be spread from person-to-person. The only way to contract it is to be bitten by a flea carrying the bacteria or by handling the body of an infected animal. Pneumonic plague, a rarer form, can be spread person-to-person if you inhale infected droplets that the sick person has coughed up.

The Researcher Who Let a Sand Flea Live in Her Foot

There’s a proud tradition of scientists conducting experiments on themselves: Jonas Salk injected his entire family with the first polio vaccine. Sir Humphry Davy inhaled the fumes he concocted in his chemistry lab. The German physician Werner Forssmann stuck a catheter in his own heart. But the fact that these gonzo studies sometimes end tragically (Jean-François Pilâtre de Rozier pioneered flight in hot air balloons and later died in one) tends to dissuade most researchers from trying.

Fleas and ticks may pose a very real threat to the health and comfort of your pet. In addition to extreme discomfort, fleas and ticks can also cause serious health problems in pets and people. Don't compromise your pet's health--understanding fleas and ticks is the first step in preventing an infestation or infection.

Did you know that it takes only a single flea bite to cause an allergic reaction in your pet? Tick and flea preventatives can do more than just eliminate your pet's itchy fleas and prevent allergic reactions.

Take this short quiz to make sure you know the facts so you can protect your dog from fleas and ticks.

Welcome to the number one site on flea bites, where you will learn everything you need to know about fleas.

People most commonly get plague after being bitten by a flea that is carrying the plague bacterium or by handling an animal infected with the disease. One can also become infected by inhaling respiratory droplets after close contact with people with pneumonic plague.

This is unimaginable, that in such an advanced society we would be facing this problem - Estela Lopez