I've never been hurt by a sea creature, except for jellyfish and sea urchins - Peter Benchley, Author of "Jaws" 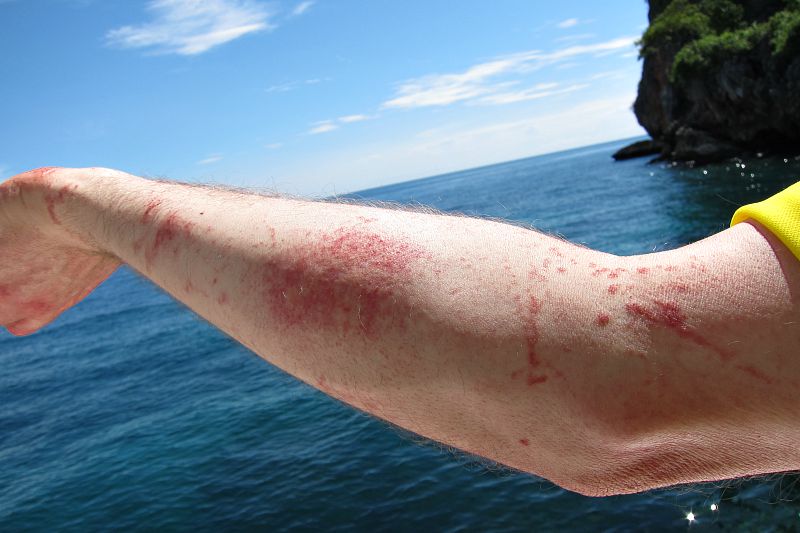 By no means is the information here supposed to be considered THE LAW, and is not to take the place of PROPER MEDICAL TREATMENT BY A LICENSED AND CERTIFIED PHYSICIAN, or other Qualified Healthcare Provider. The info here is for informational purposes only!!!!

Whew!!, Now that we got that out of the way lets cover the animals that could give you a bite, sting, or puncture wound! First the BITERS: These would include the Shark, Barracuda, Moray Eels & their cousins, and just for the sake that they do live in the Keys: Alligators & Crocodiles. All of these animals can deliver quite a nasty bite ranging from just a nip to full on Critical Situation!!!

Sea snakes are commonly found in tropical and sub-tropical waters of southeast Asia, the western Pacific Ocean, and northern Australia. There are 70 known species, 30 of which exist in Australian waters.

While there are hundreds of unique venomous fish species, 5 simple steps will help you treat most patients presenting with acute marine envenomation.

A Pitbull of the marine ecosystem, or just misunderstood?

Emergency Medicine is vast. Like a New York foodie on a restaurant binge, you could eat out every night and never come close to encompassing it all. One of the techniques I’ve learned over time to accommodate this gluttony of knowledge is to find general principles that I can apply across a wide range of clinical presentations–ones that I can fall back on say when starting work in a new geographic location with unfamiliar local disease entities. Take my first Moray Eel bite for example...

Their heart-stopping venom is considered the deadliest in all the oceans, acting instantly to paralyze the heart and nervous system. The Box have caused more loss of human life in the past 50 years than shark bites, many of their victims dying before making it to shore.

Here is Why You Should Never Touch Marine Life

Both animals and plants underwater possess many defense mechanisms, they have to otherwise they would be something else's dinner. That is why you should not touch marine life.

Marine medicine is still relatively new, so treatment recommendations for these conditions are largely based on case reports and expert opinion, with few randomized controlled studies available to guide management.

It can be difficult to know if a bite or sting from a sea creature is dangerous or not. This article explains the best first aid treatment depending on the creature involved.

Surfer Dude Health Hazards -- Just When You Thought It Was Safe To...

Besides sharks, the ocean has plenty of critters that can be hazardous to a surfer's health. Top among them are coelenterates, which are animals like jellyfish and stingrays that have dangling tentacles with venom-filled cells that inject toxins in response to chemical or mechanical stimuli.

Nothing can ruin a day at the beach like a jellyfish sting. And while such attacks are common, the methods for treating them vary, and many remedies can do more harm than good.

The seas are home to some of the planet’s most toxic creatures. Go ahead and take a good look—but don’t touch.

FIRST AID should be as follows for Puncture Wound Type Stings: First, wear gloves to remove any part of the Stinger/Spine left in the wound and rinse with SEAWATER! Second, soak affected site in HOT WATER for 20-30 minutes at 110-114 degrees Fahren- heat breaks down venom and relieves pain!

Fish and other marine animals can bite and cause cuts, scrapes, and punctures. A person who is attacked or bitten should attempt to identify the type of fish or animal, the time of the injury, and the nature of the attack.

•Wear gloves, if possible, when removing stingers. •Wipe off stingers or tentacles with a towel. •Wash the area with salt water. •Soak the wound in as hot of water as the patient can tolerate for 30 - 90 minutes, if told to do so by trained personnel.

Synopsis of management of common bites and stings.