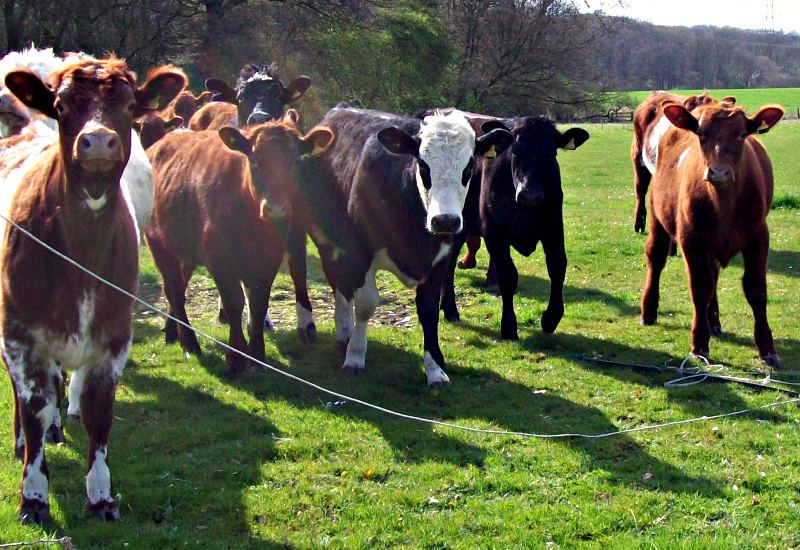 The consumption of meat and dairy accounts for around 15% of total global greenhouse gas emissions. Livestock production is the largest source of global methane and nitrous oxide emissions, two particularly potent greenhouse gases.

A March study by scientists in New Zealand found that agriculture is the primary cause of the recent rise in global methane emissions. The biggest source of methane is enteric fermentation—crudely put, animal belching and flatulence. Another new study released this month by the National Oceanic and Atmospheric Administration and University of Colorado found that, while methane from fossil fuel development is much larger than previously believed, biological…

The U.S. EPA, NOAA, NPS, tribal, state, and local agencies developed the AIRNow Web site to provide the public with easy access to national air quality information. The Web site offers daily AQI forecasts as well as real-time AQI conditions for over 300 cities across the US, and provides links to more detailed State and local air quality Web sites.

Despite clear skies during the pandemic, greenhouse gas emissions are still rising

However, the global trend of increasing levels of carbon dioxide, another greenhouse gas, has continued during the pandemic. The Mauna Loa Observatory in Hawaii recorded an increase of 2.4 parts per million (ppm) of carbon dioxide (CO₂) to a total of 417.1 ppm in May 2020. It means the pandemic has had no direct impacts on reducing carbon dioxide emissions into the atmosphere. This is why. Still prone to fires.

Effects Of Surgery On A Warming Planet: Can Anesthesia Go Green?

Sevoflurane is one of the most commonly used anesthesiology gases. The other big one is desflurane. There are others, too, like nitrous oxide, commonly known as laughing gas. Whichever gas patients get, they breathe it in — but only about 5% is actually metabolized. The rest is exhaled. And to make sure the gas doesn't knock out anyone else in the operating room, it's sucked into a ventilation system. And then? It's vented up and out through the roof, to mingle with other greenhouse gases.

The COVID-19 pandemic is delivering the biggest shock to the global energy system in seven decades, according to a new report by the International Energy Agency. Global energy demand is expected to fall by 6% this year, seven times the decline brought by the financial crisis 10 years ago. IEA projections show oil and gas being hit hard. But demand for coal could fall by an extraordinary 8% — the largest decline since World War II.

City dwellers tend to have smaller carbon footprints than their suburban neighbors. They use more public transportation and live in smaller abodes, whereas folks in the suburbs own more vehicles, have bigger homes, and enjoy larger household incomes, all of which increases one's capacity for emitting climate-heating greenhouse gases.

Hospitals are helping make us all sick

Greenhouse gas emissions from health care will be responsible for the loss of thousands of years of life.

Hospitals are scrambling to solve their air pollution issue

A single mid-size hospital contributes the same emissions as 1,200 cars.

How America Stacks Up When It Comes to Greenhouse Gas Emissions

Hint: We’re not number one, but we’re close.

Potential Eyes in the Sky on Greenhouse Gases

The world’s space agencies are calling for a new generation of satellites that would be precise enough to map greenhouse gas emissions from individual nations. Their goal is to replace decades of rough estimates with advanced monitoring of what has become one of the world’s foremost concerns.

Fifty million years ago, temperatures soared to unprecedented levels and the seas became a staggering 12C hotter than today. But researchers have found this massive warming had little to do with carbon dioxide, the main cause of today's climate changes. The trigger was instead rising levels of methane, ozone and nitrous oxide, gases that are accorded relatively scant attention by current climate treaties.

The Other Greenhouse Gases

If we somehow manage to lick our methane problem—or at least keep it in check—perhaps we can then move on to the third most prevalent greenhouse gas: nitrous oxide, commonly known as laughing gas (or, to sybarites, hippie crack).

Want to Do Something About Greenhouse Gas? Try A Carbon Tax

What are greenhouse gases?

There are 2 ways that a greenhouse gas (often abbreviated GHG) can enter our atmosphere. One of them is through human activities. The main human sources of GHG emissions are: fossil fuel use, deforestation, intensive livestock farming, use of synthetic fertilizers and industrial processes. The other is through natural processes like animal and plant respiration.

Where do greenhouse gas emissions come from?

The Earth already had greenhouse gases in its atmosphere before humans ever came along, as part of the natural carbon cycle. But since the Industrial Revolution, humans have been adding even more carbon dioxide, methane, and other greenhouse gases into the atmosphere. That's through activities such as digging up and burning fossil fuels or clearing forests. Carbon dioxide is the most important of these gases, and typically persists in the atmosphere for centuries.

Agriculture is the second largest contributor to greenhouse gas emissions after energy production, but gets far less attention than fossil fuels as a potential way to mitigate the threat of climate change.

Our Mission - “To address climate change by building and supporting a global community of experts with the highest standards of professional practice in measuring, accounting, auditing and managing greenhouse gas emissions; meeting the needs of governments, corporations and organizations large and small.”

All about greenhouse gas science.

Learn about the most important GHGs and opportunities for reducing emissions.