Most plentiful, accessible, and least expensive power source in the world - Danny Kennedy 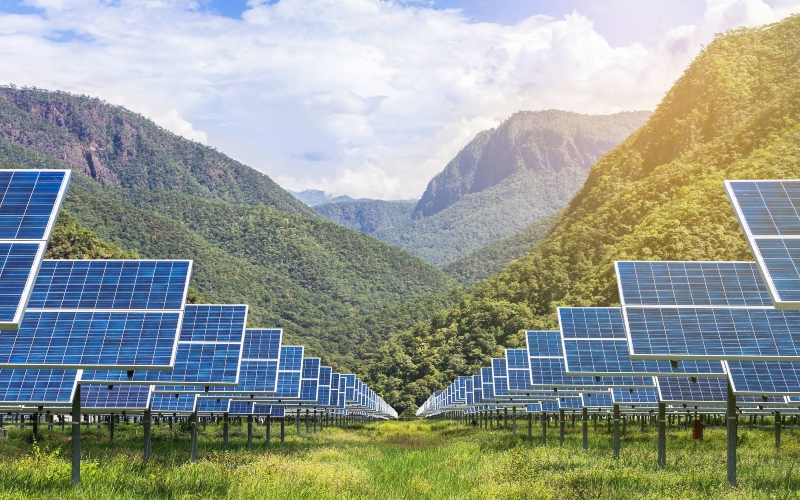 The Positive & Negative Effects of Solar Power Panels on The Environment

Solar power is the promised savior of our environment. But if so, why are there so many articles about it not being environmentally friendly? There is a popular idea among green energy skeptics that solar power panels are actually causing the same sort of negative effects on the environment as non-renewable energy sources, such as coal, oil, etc.

The main argument for this idea might be that the manufacturing process of solar panels causes similar, if not greater, pollution like regular energy sources. This is further backed up by the fact that solar panels have a relatively short lifespan, which means that their production almost never stops.

We admit that there is some basis…

Making solar panels is awful for the environment. This new design may be the cure

When it comes to combatting the planet's rising temperature and carbon emissions levels, renewable energy options like solar panels are a clear path of action. But despite the obvious environmental advantages of such an approach, authors of a new energy analysis write that current solar power technology has a larger carbon footprint than you might think.

Solar power got cheap. So why aren’t we using it more?

It turns out there’s a lot of inertia built into the energy system.

Decades of improvements in engineering and manufacturing processes have led to moderately efficient, low environmental impact, silicon-based crystalline solar modules that fill rooftops and fields around the world. This is all about to change with new technology based on manufacturing techniques that use more toxic chemicals, including nanomaterials. Next-generation solar modules offer a lot of potential but might be more toxic than we expect.

Solar Panels Are Starting to Die, Leaving Behind Toxic Trash

Photovoltaic panels are a boon for clean energy but are tricky to recycle. As the oldest ones expire, get ready for a solar e-waste glut. Solar panels are an increasingly important source of renewable power that will play an essential role in fighting climate change. They are also complex pieces of technology that become big, bulky sheets of electronic waste at the end of their lives

Solar Power Could Still Save the World

It sounds like science fiction: giant solar power stations floating in space that beam down enormous amounts of energy to Earth. And for a long time, the concept – first developed by the Russian scientist, Konstantin Tsiolkovsky, in the 1920s – was mainly an inspiration for writers. A century later, however, scientists are making huge strides in turning the concept into reality.

The Dark Side of Solar Power

Everybody loves solar power, right? It’s nice, clean, renewable energy that’s available pretty much everywhere the sun shines. If only the panels weren’t so expensive. Even better, solar is now the cheapest form of electricity for companies to build, according to the International Energy Agency. But solar isn’t all apples and sunshine — there’s a dark side you might not know about. Manufacturing solar panels is a dirty process from start to finish. Mining quartz for silicon causes the lung disease silicosis, and the production of solar cells uses a lot of energy, water, and toxic chemicals. The other issue is that solar cells have a guanteed life expectancy of about 25 years, with average efficiency losses of 0.5% per year.

Solar energy is the linchpin of this clean energy revolution. Today, it supplies a third of global electricity; well before the century is out, most of the world’s energy needs will be met by converting sunlight into electricity, heat, and portable fuels. When that happens, the 21st century will be remembered as the one in which humankind finally tamed the sun.

If Solar Panels Are So Clean, Why Do They Produce So Much Toxic Waste?

Researchers with the Electric Power Research Institute (EPRI) undertook a study for U.S. solar-owning utilities to plan for end-of-life and concluded that solar panel “disposal in “regular landfills [is] not recommended in case modules break and toxic materials leach

Is solar energy really zero emissions, clean and sustainable? How much has it grown over the last years? What’s wrong about it? Let’s find out.

Solar power is already saving lives in the US. Here's how.

Solar power is still a fairly tiny portion of US electricity, but it is growing incredibly fast. This is exciting to people for all sorts of reasons — economic development, jobs, local/democratic/decentralized power, and just general tech-of-the-future gee-whizzery. But it's worth stepping back occasionally and reminding ourselves of the original and still greatest benefit of solar: namely, that it displaces fossil fuel electricity. And burning fossil fuels to create electricity kills people, so displacing fossil fuel power directly saves lives.

The common denominator in these visions is the faith that we can save modern civilisation if we shift to new technologies. But “technology” is not a magic wand. It requires a lot of money, which means claims on labour and resources from other areas. We tend to forget this crucial fact.

Impact of Solar Energy on Wildlife Is an Emerging Environmental Issue

While renewables in general, and solar power in particular, have been touted as generally benign with regard to environmental impacts, some solar projects that have recently been placed in service reveal that mortal risks to wildlife, and especially avian species, are likely to demand additional consideration and management. This means new mitigation efforts are now being tested and developed.

Overall, this is an interesting and important piece of research, highlighting the need to be mindful of unintended consequences, be these positive or negative, of the energy transition. Integrating these findings with other social, economic, environmental and technical considerations is essential to ensure we don’t leap from the frying pan into the fire.

Solar panels might be the energy source of the future, but they also create a problem without an easy solution: what do we do with millions of panels when they stop working?

Solar Energy Isn’t Always as Green as You Think

Solar Power Begins to Shine as Environmental Benefits Pay Off

Amid polemics over rising electricity prices in Europe and the level of green energy subsidies in various countries, it is easy to lose sight of the fact that the growth in clean-energy generation is a huge success story. Solar photovoltaic generation, known as PV, like wind power before it, is coming into the mainstream — at great environmental benefit.

Racial and ethnic minorities have less access to solar power, regardless of income, highlighting the need for environmental justice.

The Costs of Solar Energy to the Environment

Solar energy is widely seen as a crucial means of reversing climate change by replacing fossil fuels with renewable sources. Drought-stricken California has been particularly aggressive in its use. But installations like Ivanpah generating station in the Mojave Desert, above, have created controversy as well as energy, with some questioning the environmental harm these enormous arrays can create. As the use of alternative energy increases, can huge solar installations contribute efficiently and safely?

The sun is a tremendous source of renewable energy. Nevertheless, the adverse effects of solar power are associated with land use, water use, habitat loss, and the harmful materials used in manufacturing of solar panels.

The dark side of solar

How the rising solar industry empowers political interests that could impede a clean energy transition.

The environmental impacts of solar and wind energy

The Positive and Negative Environmental Impacts of Solar Panels

Are solar panels as green as you think? There are good and bad environmental impacts of solar power...

The Pros and Cons of Using Solar Energy

Which is why the biggest quest in energy right now is a way to store all that beautiful solar energy. Solve this problem, and you are well on your way to solving global warming.

Spending billions of dollars on climate-related aid in countries that need help with tuberculosis, malaria and malnutrition.

Not getting sick and dying from pollution is worth quite a bit, it turns out.

Far from being a miracle cure-all for the shortcomings of conventional power generation, wind and solar power exaggerate the symptoms they pretend to address.

Solar power is talked about a lot these days. Whether it’s a new solar panel installation on your neighbor’s roof or one of the growing numbers of solar panel “farms” located near many highways, this technology is showing up more and more in our daily lives.

The Positive & Negative Effects of Solar Power Panels on The Environment

Solar power is the promised savior of our environment. But if so, why are there so many articles about it not being environmentally friendly? There is a popular idea among green energy skeptics that solar power panels are actually causing the same sort of negative effects on the environment as non-renewable energy sources, such as coal, oil, etc.