Where in health am I? : Home / Health Cloud / StaynHealthy / Immunologic Health / Immunotherapy / IVIg

It truly is a wonder drug. There’s aspirin. That was the first miracle drug. Then statins – the cholesterol drugs – that’s the second one. And then, it’s IVIg - Donald Branch PhD 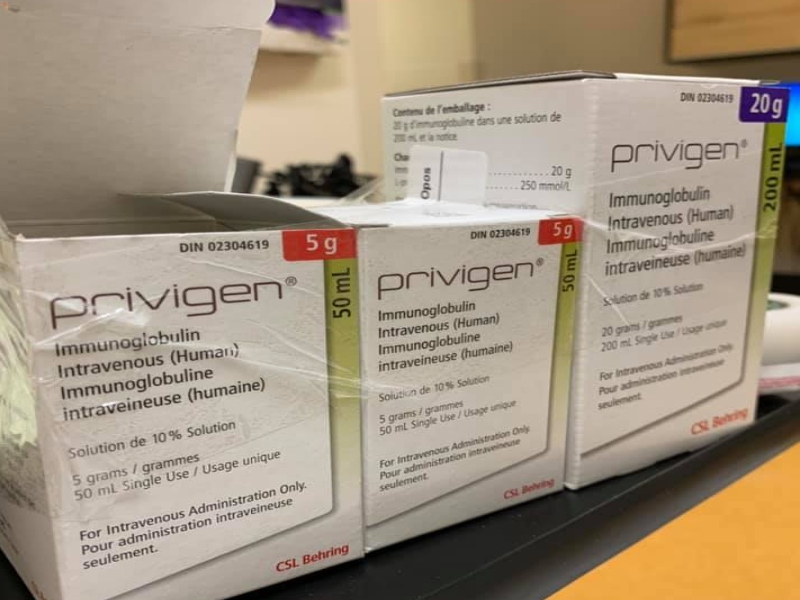 The wonder drug you’ve probably never heard of – yet

The first thing you notice when you walk into Dr. Don Branch’s office at 67 College Street in Toronto is how small it seems. And colourful, owing to an impressive collection of memorabilia that suggests a full and perhaps eclectic life: show posters, photos of his family and small items such as those one would get from a student or colleague sharing an inside joke. Copious as they are, the richness-of-life souvenirs are nearly crowded out by shelves and stacks of books and what appear to be research papers, some in folders, most not. The stacks disappear into the shadows of Branch’s sparsely lit room.

It’s almost as mysterious and as awe-inspiring as IVIg, or intravenous immunoglobulin,…

No one can argue that immune globulin (IG) therapy is a game-changer for people who require this lifesaving treatment. Unfortunately, it comes at a price, often in the form of side effects. Fortunately, when side effects occur, reactions are typically mild to moderate. And, while serious side effects can occur, they are rare. The good news is in almost all cases, effects can be controlled or even eliminated.

IVIG is made from thousands of pooled human plasma donations. To prevent transmission of blood-borne viruses or diseases, plasma donors are carefully screened, and the donated plasma is tested and treated to ensure it does not contain any pathogens. Basically, each person and their donated blood are tested prior to combining it with other donors, known as pooling. IVIG manufacturing has evolved over the years, and the product is very safe.

IVIG: You're Not Alone

“Does anyone know of others in (fill in city and state here) who are being treated with IVIG?” That is the type of question that appears from time to time in my daily Google alerts that keep me abreast of news on the topic of intravenous immune globulin (IVIG). Of course, this is a person who is desperately trying to connect with others like them. And, I often wonder after I read these questions, “Did they find someone?” If I told you there are a lot more people out there like you than you could ever imagine, would you believe me? People who are ill enough to need IVIG to allow them to function daily or even to keep them alive? You may not have met anyone in your social circle, but you’d be surprised how much company you actually have.

My life depends on medicine made from plasma. The plasma shortage worries me

Because Ig is used to treat a variety of life-threatening conditions, the demand continues to grow. There is currently an acute shortage of Ig. People across the country are being forced to prolong the time between treatments, take reduced doses, or turn to less-effective treatments.

Intravenous immunoglobulin (IVIG) is a blood product prepared from the serum of between 1000 and 15 000 donors per batch. It is the treatment of choice for patients with antibody deficiencies. For this indication, IVIG is used at a ‘replacement dose’ of 200–400 mg/kg body weight, given approximately 3-weekly. In contrast, ‘high dose’ IVIG (hdIVIG), given most frequently at 2 g/kg/month, is used as an ‘immunomodulatory’ agent in an increasing number of immune and inflammatory disorders.

When you need it—and when you don’t

Intravenous immunoglobulin in pediatrics: A review

There has been a rapid expansion of the use of intravenous immunoglobulin (IVIG) for an ever-growing number of conditions in children and neonates. IVIG has a few proven indications and many potential ones.

The wonder drug you’ve probably never heard of – yet

Wonder drug it may be, but IVIg is a slippery fish. Even after 60 years, little is known about precisely how it works.

Ig replacement therapy is one of the most important and successful therapies for people with primary immunodeficiencies (PI) that affect antibody production. The therapy is both lifesaving and often lifelong, and it plays a vital role in the lives of many people with PI.

Immunoglobulin has been widely used in a variety of diseases, including primary and secondary immunodeficiency diseases, neuromuscular diseases, and Kawasaki disease. Although a large number of clinical trials have demonstrated that immunoglobulin is effective and well tolerated, various adverse effects have been reported. The majority of these events, such as flushing, headache, malaise, fever, chills, fatigue and lethargy, are transient and mild. However, some rare side effects, including renal impairment, thrombosis, arrhythmia, aseptic meningitis, hemolytic anemia, and transfusion-related acute lung injury (TRALI), are serious.

A shortage of immune globulin has forced hospitals to ration treatments. ‘For the patients affected, it’s been very significant’.

Intravenous immunoglobulin (IVIG) is a pooled antibody and a biological agent used in the management of various immunodeficiency states and a plethora of other conditions including autoimmune, infectious, and inflammatory states. The ultimate goal of this therapy is to normalize a compromised immune system

Update on the use of immunoglobulin in human disease: A review of evidence

Immunoglobulin is increasingly recognized as a treatment of a variety of medical conditions, not only for its ability to fight infection as a replacement therapy but also for its antiinflammatory and immunomodulating effects.