Where in health am I? : Home / Health Cloud / StaynHealthy / Metabolism / Leptin 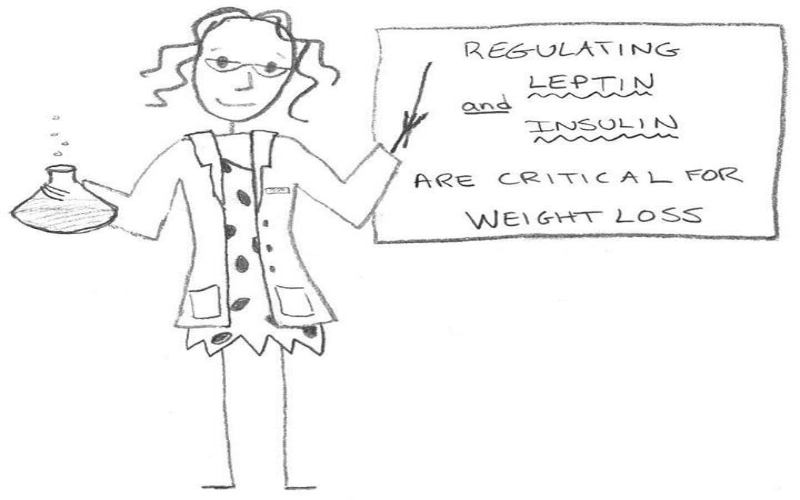 image by: The Paleo Mom

Does the Emperor Have Clothes?

The hormone leptin—discovered 22 years ago and named based on the Greek word leptos, “slim”—has been widely hailed as the key regulator of leanness. Yet, the key experiments that probe the function of this protein and unravel the precise mechanism of its action as a guardian against obesity, are largely missing.

These are the conclusions in a commentary published June 22 in Cell Metabolism by Harvard Medical School metabolism experts Jeffrey Flier and Eleftheria Maratos-Flier. Flier, the HMS George Higginson Professor of Physiology and Medicine, and Maratos-Flier, HMS professor of medicine at Beth Israel Deaconess Medical Center, have made significant contributions to the understanding…

To keep the human brain supplied with energy when food was scarce, mammals evolved the ability to switch from burning carbohydrates to burning fat in order to preserve skeletal muscle that would otherwise be metabolized and converted to glucose. Scientists have long believed that the transition to fat metabolism was instigated solely by a drop in insulin. But a new study has identified leptin — a hormone made by fat cells — as a key mediator in this fundamental biological process.

Can't Keep the Weight Off? Maybe Leptin Is the Culprit

So, you ate less and exercised more and lost weight. But now the pounds are piling back on. You're hungrier than ever, and you can't seem to resist food. Once again, it's all your fault, right? Wrong. Blame evolution, and the fact that for the vast majority of human history, famine was a bigger threat than flab.

Could it be Leptin Resistance?

Leptin resistance is when your cells become numb to leptin, the hormone of hunger and satiety—that is, nature’s appetite suppressant. Under normal conditions, when you’ve had enough to eat, leptin signals your brain to stop eating, i.e., it’s time to put down the fork.

Why is it important to know about the LEP gene (also known as OB or OBS) and leptin? Not only because leptin could be an explanation for part of the obesity epidemic in our country, but also because Leptin supplements are currently a hot topic in the field of weight loss. The vast selection of articles on leptin from popular news sources like the Huffington Post, books like “Leptin Diet (Take Charge),” and the creation of “official” Leptin diets and leptin supplements are all evidence of the buzzword leptin is becoming. As the cultural interest in leptin increases, it is essential that we all know just what it is and how it works, as well as where it comes from.

Leptin and Weight Loss (Is This Hunger Hormone the Key?)

If you’re having trouble losing weight, it could be a sign that there are more factors at play than just diet and exercise. The relationship between ghrelin, leptin and weight loss is clear and it could have a role in your weight troubles.

Leptin and Weight Loss (Is This Hunger Hormone the Key?)

If you’re having trouble losing weight, it could be a sign that there are more factors at play than just diet and exercise. The relationship between ghrelin, leptin and weight loss is clear and it could have a role in your weight troubles.

Scientists have identified a neural circuit in the hypothalamus as the primary mechanism mediating the hormone leptin's anti-obesity and anti-diabetes effects and found two mechanisms underlying leptin's inhibition of appetite. The work in mice advances efforts to treat human obesity and diabetes.

Leptin: How to Make This Fat-Burning Hormone Work for You

One key area of obesity research focuses on how the hormone leptin influences the body’s ability to shed excess pounds. What could a hormone have to do with weight loss? According to the latest research, leptin plays an important role in appetite control, metabolism and weight loss. It is your body’s natural weight control mechanism. And the great thing about leptin is that it is produced naturally in the body.

Leptin: Your brain's superhero that keeps you full and controls weight loss

Leptin is released in the body in response to an adequate meal and fat storage, and plays a crucial role in the regulation of body weight and energy balance. It circulates in the blood and binds to the receptors in the brain which produces a feeling of satiety or fullness. Leptin ideally limits adipose tissue accumulation, hence regulates body weight. At the same time, it also signals the brain to increase the energy expenditure to regulate the levels of adipose tissue in the body. Hence, Leptin is aptly labelled as the 'protector of fat metabolism'.

Why You Need To Learn About Leptin If You Are Overweight

Sure, the popular hormones like growth hormone and testosterone play a big role when it comes to fat loss. But there are two other hormones that play a much larger role in determining our body fat levels. These are the true star performers of the show. And you may have never heard of them before. They are leptin and ghrelin. The big players in the game of fat loss.

Does the Emperor Have Clothes?

Leptin 101: How This ‘Hunger Hormone’ May Be Preventing You From Losing Weight

When a person is not in balance then their brain doesn’t sense leptin levels correctly, which builds up a resistance to the hormone. Almost all overweight people have HIGH leptin levels.