Our lives are defined not by the challenges we encounter, but by how we respond to those challenges - Jonathan Lockwood Huie 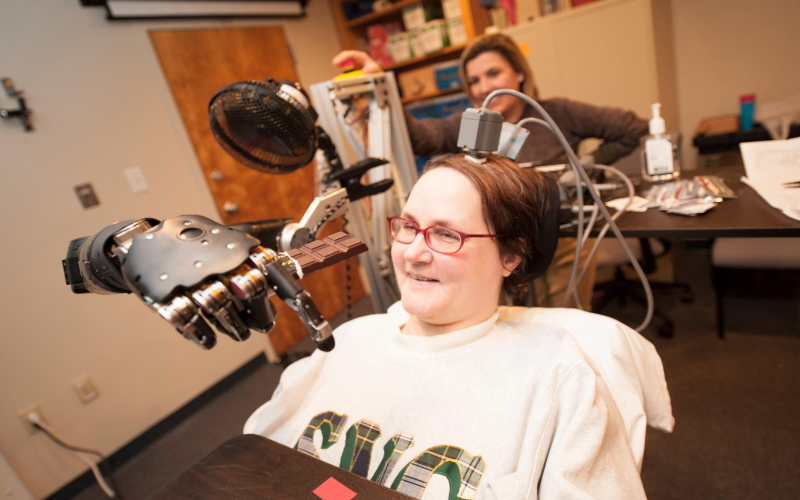 This Is What It Feels Like to Be Quadriplegic

It sucks being a quadriplegic.

It's terrible not being able to stand, to walk, to run. To go for a hike in the woods. To walk down the stadium steps and be a part of the home team.

I hate being the reason your plane or bus is late. Trust me, I feel awful about that. I miss stretching my legs after a hard day, or dancing at a wedding (badly).

Coming To My Senses

A Documentary film about recovering quadriplegic Aaron Baker and his 15 years struggle to regain movement.

Researchers say a tiny device implanted in the brain of a man with quadriplegia has helped restore movement in his hand.

This Is What It Feels Like to Be Quadriplegic

It sucks being a quadriplegic. It's terrible not being able to stand, to walk, to run. To go for a hike in the woods. To walk down the stadium steps and be a part of the home team.

Ekso Bionics uses the power of smart exoskeleton technology machines to empower people. Our therapeutic devices can help stroke patients during rehabilitation learn to walk again and provide those with spinal cord injuries the chance to stand and walk.

ReWalk is a wearable robotic exoskeleton that provides powered hip and knee motion to enable individuals with spinal cord injury (SCI) to stand upright, walk, turn, and climb and descend stairs*. ReWalk is the first exoskeleton to receive FDA clearance for personal and rehabilitation use in the United States.

A Quadriplegic and His Sister

Daily Life of a Quadriplegic

I'm a C5 Quadriplgic. This is my first blog so i hope you enjoy!

i am C - 6 quadriplegic paralyzed from the mid-chest down. my hands are paralyzed as well, although i've learned to use them in everyday activity. for finer things like drawing, writing, typing and painting i must use a brace. i write a blog for the benefit of anyone who wants to live a happier, healthier, fuller, richer life with better self esteem, image, worth and confidence. my target audience is the newly injured SCI victim, but i believe anyone can benefit from my words.

How I relearned living.

This is a blog detailing the daily struggles of having a child with Spastic Quadriplegic Cerebral Palsy.

I'm a quadriplegic mother of six children. We look like we have it together, your average American family. Well, were far from that.

Quadriplegia, also known as tetraplegia, is thusly named because it affects all four limbs, plus the torso (quad originates from the Latin word for four). Most people with tetraplegia have significant paralysis below the neck, and many are completely unable to move. This form of paralysis is inevitably the product of damage high in the spinal cord, usually in the cervical spine between C1-C7. The higher the injury is, the more extensive the damage will be, and very high spinal cord injuries are often immediately fatal.