Where in health am I? : Home / Health Cloud / StaynHealthy / Newborn Health / Infant Formula

Breast is best, but could the alternatives ever be almost as good - Jessica Grose 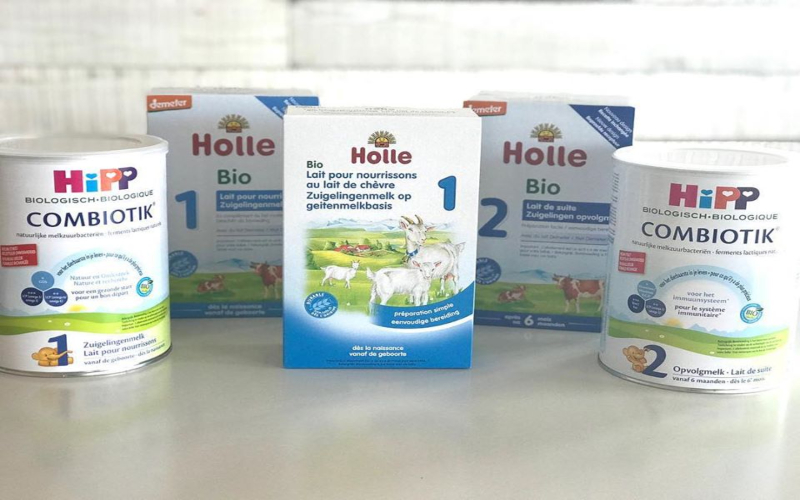 Though many charges in the so-called “mommy wars” are trumped up, there’s one issue within them that is demonstrably fraught: breast-feeding. Formula-feeding women are told that “breast-feeding is optimal” and that they do their babies a disservice by not nursing. Some American hospitals are so pro-nursing that their entreaties to breast-feed make new moms feel uncomfortable. The latest flashpoint in the breast-feeding wars is about whether or not women with surplus supply should be selling their breast milk or whether they should only be giving it away altruistically. What undergirds this particular strain of controversy—and pretty much all of breast-feeding-related controversies—is the notion…

A Formula for Success: The Ultimate Guide to Infant Formulas

Maybe breastfeeding didn’t work out for you. Or maybe it was going well until you went back to work. Maybe you were never really interested. Whatever that case, you’ve decided to feed your baby formula. You don’t have to apologize, feel guilty, or justify your reasons to anyone.

Imagine a World Where Men Had to Breastfeed Their Babies

When I finally got home and found that my baby had been happily guzzling formula and was fine, instead of feeling relief, I cried. By feeding him formula, I felt, I had failed him on some level. That now seems ridiculous, but at every turn, formula had been framed to me as a distant second best, a somewhat shameful option you turn to only as a last resort.

What should I know about infant formula?

Keep in mind that formula (like a medication) comes with its own set of risks, and parents need to be aware of these so they can make an informed decision on its use. The use of formula can shorten the breastfeeding relationship, and comes with increased health risks for baby and mother.

If you’ve ever seen the astonishing array of infant formula sold in supermarkets, you might wonder if the stuff can really make your baby smarter, allergy-proof, or less colicky, as advertised. The Food and Drug Administration wonders the same thing.

Breast Milk Is Best for Newborns, but the Bottle Is Fine, Too

It is generally acknowledged within the medical community that breast milk is the ideal first food for babies, although modern formula brands can also get the job done

Understanding how the components of breast milk interact with a baby's gut microbiome could also help scientists design better infant formulas, or even design pro- or prebiotics that could steer the microbiome toward a healthier profile, Hinde added.

The powder and water used to make baby formula may be sources of arsenic, which occurs naturally in the environment and in large doses is linked to serious health problems.

DHA and ARA in Infant Formula

Dangerous and unnecessary—synthetic additives have no place in infant foods.

How New Marketing is Helping Solve an Industry's Image Problem

Baby formula has an image problem. And it’s been hotly debated around the world for decades. Sales of baby formula in the U.S. have fallen alongside the nation’s birthrate -- and an upsurge in breastfeeding, according to Reuters. And the World Health Organization recommends breastfeeding until at least age 2. So what’s an infant formula company to do?

There was no consistent evidence that use of partially or completely hydrolyzed formulas decreased the risk of babies having allergic or autoimmune reactions. And the babies examined were at higher than usual risk of such outcomes.

This simple, concise guide provides formula-feeding parents with a quick overview on how to choose your infant formula.

C-sections and formula feeding could be interfering with a critical biological process.

Mainly, Chinese parents want to ensure that the formula they are feeding their babies has never been touched by a Chinese company. The reason is obvious. In 2008, six babies died and some 300,000 became ill after their mothers fed them baby milk products that were tainted with the chemical melamine. Ever since, Chinese mothers haven’t trusted domestically made baby milk products — starting with formula.

The Difference Between Powder, Concentrated Liquid, and Ready-to-Use Formulas

Which preparation of formula is best for your baby -- and your new mom lifestyle?

The dos and don’ts of safe formula feeding

It might make feeding your infant easier than the alternatives, but there are at least three different ways it can become contaminated.

What Does ‘Organic’ Mean for Baby Formula?

The biggest surprise was that in many of the formulas, the main ingredient was not milk, but highly processed, refined sweeteners (often listed as organic glucose syrup solids).

“Breast is best,” but could the alternatives ever be almost as good?

We wanted to make all those wonderful European formula also available to other like minded American parents at low cost and lightning speed shipping. And after many years of hard work, trips to Europe and more, so we have with outstanding results! We are now the leading and largest Holle, Hipp and Lebenswert retailer in the USA and Canada. We get testimonial after testimonial of your babies thriving on the formulas and cereals too and overcoming health issues they experienced on other brands.

If you don't breast-feed, need to supplement breast-feeding, or decide to wean your baby before age 1, you'll need to give him formula. Usually derived from cow's milk, formula provides a wide range of nutrients but not all the crucial components of breast milk.