Where in health am I? : Home / Health Cloud / StaynHealthy / Nutrition / Fiber

While we obsess about carbs and protein, we’ve ignored fiber — at our peril - Julia Belluz 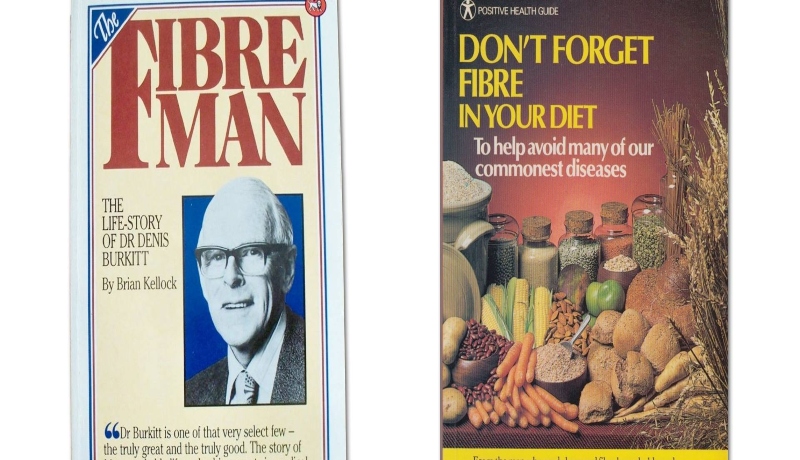 Nearly all Americans fail to eat enough of this actual superfood

When we fret about the deterioration of the American diet, we tend to focus on the excessive amounts of sugar, salt, and calories we’re now eating.

What we don’t talk about: an important ingredient that’s gone missing as we’ve been filling our plates with more chicken and cheese.

Fiber. Only 5 percent of people in the US meet the Institute of Medicine’s recommended daily target of 25 grams for women and 38 grams for men. That amounts to a population-wide deficiency — what nutritionists call the “fiber gap.”

“People are so busy avoiding carbs, they forget that these foods give [them] important dietary components,” said nutritionist Julie Jones, of St. Catherine University.

Fiber is so much more than “roughage!” From your heart and your bones to your microbiome, the list of health benefits linked to fiber keeps getting longer as nutrition science learns more about what it does for us.

Fiber Is Good for You. Now Scientists May Know Why.

A diet of fiber-rich foods, such as fruits and vegetables, reduces the risk of developing diabetes, heart disease and arthritis. Indeed, the evidence for fiber’s benefits extends beyond any particular ailment: Eating more fiber seems to lower people’s mortality rate, whatever the cause. That’s why experts are always saying how good dietary fiber is for us.

How Much Fiber Should I Be Eating to Feel Regular?

You’ve surely heard all about fiber and its many virtues. For starters, we know that eating lots of fiber-filled foods is associated with a regular pooping schedule, but it's also associated with improved heart health, feeling full and satisfied after meals, and keeping your blood sugar stable. But how much should you actually be eating—especially if your main goal is to go to the bathroom regularly? Here’s the deal on how much fiber you actually need to be eating.

Diets can be overwhelming, but one small change can do a lot.

Fibre - it's not the sexiest thing in the world but a major study has been investigating how much fibre we really need to be eating and found there are huge health benefits. "The evidence is now overwhelming and this is a game-changer that people have to start doing something about it," one of the researchers, Prof John Cummings, tells BBC News.

Because you’re almost certainly not getting enough of it.

Previous studies have pointed to possible reasons why fiber has such beneficial effects on everything from heart disease to certain cancers. Fiber-rich foods tend to be heavier and require longer to chew, which increases satiety and possibly lowers the risk of obesity, which has been linked to heart disease and cancer. Fiber also stimulates beneficial bacteria in the gut, reducing the risk of colon cancer.

Don’t be fooled by polydextrose and other fiber additives.

Garbage Contains All of the Nutrients Missing from Our Diet

In a single day, American food waste contains an average 1.8 billion grams of dietary fiber, for example. American women typically under-consumer fiber by 8.9 grams per day, which means the fiber found in our trash would provide enough to close the gap in daily intake requirements for 206.6 million adult women.

Adults eat an average of 18g of fibre a day. How can you improve on that? Fibre, a carbohydrate that can’t be broken down by our digestive enzymes, is found in many plants. “Because the components of dietary fibre are found in different proportions in fibre-containing foods and have different properties, it is important to eat a variety of fibre-containing foods”, according to the British Nutrition Foundation (BNF).

Processed foods are a much bigger health problem than we thought

The lack of fiber in ultraprocessed foods may harm us too.

When you start to consume these fibers and sugars for the first time or greatly increase your intake, your body may be unprepared to deal with the sudden change. It takes a few days for your gut bacteria to shift to the species that feed on plant-based foods, and when they do, they get busy fermenting compounds relatively alien to your body.[9] The result? Some people experience digestive discomfort, bloating, or embarrassing flatulence, making them reluctant to continue on their plant-based journeys.

'Cultured': A Look At How Foods Can Help The Microbes Inside Us Thrive

So people eating modern, Western diets are getting maybe 15 to 30 grams of fiber a day, when our bodies may be adapted to expect over 100. This lack of fiber seems to be making a big impact on the diversity of our microbiome.

Denis Burkitt and the origins of the dietary fibre hypothesis

How did Burkitt over a period of only 6 years come to understand dietary fibre and weave it into an hypothesis for the prevention of the major diseases of Western culture? And get the credit for it? Fibre had a long history and there was wealth of literature written about it by animal and human nutritionists and medical scientists.

Fiber in Fruits and Grains Protects Against Diverticulitis

Found in fruits, vegetables, whole grains and legumes (like beans and lentils), dietary fiber is already an important part of a healthy diet. Fiber is made up of all the plant material a human body can’t absorb, so it isn’t digested. But both kinds of fiber—soluble and insoluble—contribute to a healthy gut. While insoluble fiber passes through the body quickly (which keeps your bowel movements regular), the former attracts water, creating a gel that slows digestion. This makes you feel more full, which contributes to weight loss, and also seems to slow the absorption of “bad” cholesterol.

Fiber Mistakes You Make That Bother Your Belly

Knowing how different types of fiber affect your belly can make a big difference in your quality of life. Here’s a primer.

People who consumed higher amounts of fiber, particularly from grains, had a significantly lower risk of dying over a nine-year period compared to those who consumed lower amounts of fiber, according to a new National Institutes of Health study released online Monday. Fiber, found in whole grains, beans, nuts, vegetables and fruits aids the body with bowel movements, lowers blood-cholesterol levels and improves blood glucose levels.

Plenty of fiber: That’s long been the recommendation for a healthy diet. But why? The main rationale has been that fiber is made up of undigestible bulk that prevents people from eating unhealthy food — and helps keep the digestive tract regular. But new research suggests that dietary fibers actually play a critical role in feeding the trillions of microbes that reside in our bodies, known collectively as the microbiome.

Health Check: are you eating the right sorts of fibre?

Eating dietary fibre - food components (mostly derived from plants) that resist human digestive enzymes - is associated with improved digestive health. High fibre intakes have also been linked to reduced risk of several serious chronic diseases, including bowel cancer. In Australia, we have a fibre paradox: even though our average fibre consumption has increased over the last 20 years and is much higher than in the United States and the United Kingdom, our bowel cancer rates haven’t dropped.

Adiet rich in fruits, vegetables, and other high-fiber foods during adolescence and young adulthood is associated with women having a much lower risk of developing breast cancer, according to a study published Monday in Pediatrics.

The Importance of Dietary Fiber

f you're like most Americans, you're probably only getting about half of the fiber you need. It's time to start eating more whole grain breads and cereals, beans, peas, fruits, and nuts.

Your Juice Cleanse Is Probably Doing More Harm Than Good

“The problem with fruit juices or smoothies comes down to fiber,” says Robert Lustig, a professor of pediatric endocrinology at the University of California, San Francisco.

Nearly all Americans fail to eat enough of this actual superfood

When we fret about the deterioration of the American diet, we tend to focus on the excessive amounts of sugar, salt, and calories we’re now eating. What we don’t talk about: an important ingredient that’s gone missing as we’ve been filling our plates with more chicken and cheese. Fiber.

Lots of small changes to the diet can help us get the fiber we’re missing.

Curious to uncover one of the most effective weight loss and health secrets of all time? A trick that all but ensures you'll remain full and satisfied while shedding pounds? The answer is pretty simple: Eat more fiber, something a lot of people aren't currently doing.

Fibre is a type of carbohydrate that we cannot digest. With other types of carbohydrates, such as sugars and starches, our digestive system breaks them down into absorbable simple sugars, which our bodies use as energy. Fibre, on the other hand, passes through into the colon undigested, where it adds bulk to stool and, in some cases, becomes food for the beneficial bacteria colonizing the gut. The health benefits from fibre are numerous, but not enough people meet their daily fibre needs.

Fiber appears to reduce the risk of developing various conditions, including heart disease, diabetes, diverticular disease, and constipation. Despite these benefits, fiber probably has little, if any, effect on colon cancer risk.

Dietary fiber, also known as roughage or bulk, includes the parts of plant foods your body can't digest or absorb. Unlike other food components, such as fats, proteins or carbohydrates — which your body breaks down and absorbs — fiber isn't digested by your body. Instead, it passes relatively intact through your stomach, small intestine and colon and out of your body.

Fiber is a substance in plants. Dietary fiber is the kind you eat. It's a type of carbohydrate. You may also see it listed on a food label as soluble fiber or insoluble fiber. Both types have important health benefits.