Where in health am I? : Home / Health Cloud / StaynHealthy / Nutrition / Supplements / Brain Enhancers

Until recently the main chemical cognitive enhancer most people used was caffeine. But there are a whole batch of new drugs that could challenge caffeine’s dominance as the safe stimulant of choice - Brainscape 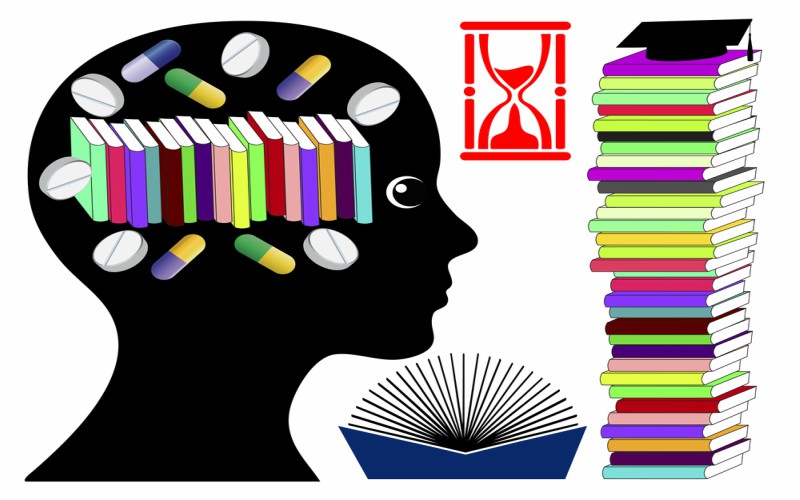 Nootropics aren’t new—the word was coined in 1972 by a Romanian doctor, Corneliu E. Giurgea—but the Silicon Valley-led body-hacking movement, epitomized by food replacements like Soylent and specialized supplements like Bulletproof Coffee, seems to have given them new life.

There are dozens of online forums, including an active subreddit, where nootropics users gather to exchange stack recipes and discuss the effects of various combinations of compounds. And although their “brain-enhancing” effects are still generally unproven, nootropics proponents point to clinical studies showing that certain compounds can increase short-term memory, reduce reaction time, and improve spatial awareness...

Nootropics fans will tell you that there’s nothing all that odd about wanting to tweak the brain’s performance. Roughly ten percent of American adults take prescription antidepressants, after all, and roughly twenty percent take some sort of psychiatric medication. We’re a nation that long ago made peace with psychopharmaceuticals...

Some nootropics users are hopeful that the drugs could be permanently “neuroprotective”— in other words, that the compounds could slow down the neuronal aging process, and help avoid cognitive deterioration later in life...

I must have seen the commercial for Prevagen 50 times. Perhaps you’ve seen it, too: “You might take something for your heart… your joints… your digestion. So why wouldn’t you take something for the most important part of you… your brain? With an ingredient originally found in jellyfish! Healthier brain, better life!”

Supplements that promise to sharpen memory, focus and other brain functions are prompting questions about safety.

Do Nootropics Actually Work? I Took a Bunch of Magic Brain Pills to Find Out

Swallow a pill and become a better you? Nootropics sound too good to be true. So we sent one staffer to investigate.

How biohackers are trying to upgrade their brains, their bodies — and human nature

9 questions about biohacking you were too embarrassed to ask.

Mind-bending drugs and devices: can they make us smarter?

Demand for drugs and devices that can enhance brain functions such as memory, creativity, attention and intelligence, is on the rise. But could the long-term side-effects outweigh the benefits of being “smarter”?

Nootropics, or ‘Smart Drugs,’ Are Gaining Popularity. But Should You Take Them?

The idea that a pill can supersize human intelligence is decidedly science fiction. But plenty of real-world researchers and drug-makers are working to develop nootropics: pills, supplements and other substances designed to improve various aspects of cognition.

One Day There May Be a Drug to Turbocharge the Brain. Who Should Get It?

What would happen if Dr. Abraham found her dream solution and invented a pill to raise Klotho levels in the brain? Perhaps people would respond like mice, gaining protection against disorders like Alzheimer’s disease. It’s also possible that healthy people would respond to such a pill the way healthy mice respond to extra Klotho — their minds would be enhanced. For Dr. Juengst, the ethics of such a drug would be tricky to sort out. “Enhancement is not inherently evil,” he said. “We’d all have to give up coffee if it was.”

The all-too-understandable urge to buy a better brain

Another wave of nootropic supplements is hitting the market, promising to make us smarter, more focused, more relaxed, more in control.

The Majority Of People Are Fine With Brain Doping, As Long As You Don't Call It That

From smart drugs to over-the-counter nootropics, popping pills to boost brain power has become a billion-dollar business. After all, in our increasingly distracted, aging, and sleep-deprived world, anything that promises better concentration, alertness, and memory is more than tempting – for some it might feel like a necessity.

The underground world of "neuroenhancing" drugs.

Prevagen: How Can This Memory Supplement Flunk Its One Trial and Still Be Advertised as Effective?

Quincy Bioscience, the Wisconsin company that manufactures it, claims that Prevagen “has been clinically proven to improve memory.” But that’s not what the company’s own study showed.

Provigil vs Nuvigil: Which Is Better for Daytime Sleepiness?

A Safe Drug to Boost Brainpower

Are You a Cheater If You're Using Smart Drugs to Get Ahead?

Universities and other organizations are now considering the ethics of using nootropics and other "smart drugs."

You won’t find a real-life limitless pill out there. No such drug exists that turns you into a genius or a millionaire overnight. But, there are many supplements and brain pills that can increase cognitive function. These brain boosters may be enough to kickstart your new path to success. Enhance your focus, energy, and motivation. Improve your memory retention, mood, and more with our list of nootropics...

“Smart drugs” are not clinically proven and could be dangerous.

Over the past year, Facebook users may have done a double take on seeing ads for Alleradd, a cognitive enhancement pill that sounds a lot like the prescription drug Adderall.

I took some to find out.

Like many of my friends, I spent years using prescription stimulants to get through school and start my career. Then I tried to get off them.

Ginkgo Biloba? Forget About It.

A history of the top-selling brain enhancer.

Will Aniracetam, Oxiracetam, Huperzine A, Modafinil, and something called "Lion's Mane" improve my IQ?

Excess is out, efficiency is in. Welcome to the world of nootropics.

Nootropics and Brain-Hacking: Hype Versus Reality

"Smart" pills are not actually a thing. "Slightly better at concentrating" pills might be.

Nootropics, more colloquially known as “smart drugs,” are in the zeitgeist. Hollywood productions like Limitless and Lucy to a CNN profile of a quirky tech millionaire spending $300,000 to hack his own body with research chemicals have certainly raised the profile of nootropics in the mainstream.

Although nootropics are incredibly effective in regards to enhancing the brain’s cognitive abilities, they are not considered to be complete miracle workers, and there are still other things that individuals must do in order to make nootropics work as efficiently as possible.

Cognitive performance enhancers promise to deliver a better version of ourselves: smarter, more alert and more mentally agile. But what if such enhancement was no longer a personal choice but a socially and legally enforced responsibility?

Silicon Valley’s Eating Up Super Ritalin. I Got the Best of It.

The promise? They’ll increase concentration, memory, attention span, combat sleep fatigue, and—in some cases—flat out change the way our brains work. Not in a fantastical sense, like in the way the miracle pill in the film Limitless allows Bradley Cooper’s character to achieve riches and glory.

The Bad News About Nootropics and Smart Drugs

Of the many thousands of people who have posted online their experiences with Nootropics, the vast majority are overwhelmingly positive. People report feeling amazing and are significantly more productive. However, there are a few negatives you should be aware of before dabbling with the seductive world of smart drugs.

The drugs do work: my life on brain enhancers

Could an unlicensed mind pill restore the energy lost to multiple sclerosis? For a novelist who feared her working life was over, it was worth the risk…

The drug modafinil was recently found to enhance cognition in healthy people. Should you take it to get a raise?

Two epidemics dominate the news today: the Zika virus and the rampant use of opiate drugs. To these, New York Times reporter Alan Schwarz adds another: the long-simmering plague of rambunctious American children who have been diagnosed with Attention Deficit Hyperactivity Disorder and prescribed the drugs that treat it.

Nootropic supplements are all the rage among entrepreneurs, executives, and even college students. But are they safe?

Although wisdom may come with age, our brains don’t get any faster. Many areas of cognitive function decline over time: attention wavers, processing speed decreases, memory starts to crumble. All kinds of methods for fighting back against this brain-wide slow-down have been suggested. There is training with computer programs, popping pills, taking nutritional supplements, meditating or even getting some more exercise.

Will 'Smart Drugs' Really Make Us Smarter, or Just Ruin Our Lives?

Given the recent surge in the popularity of nootropics—non-addictive drugs that enhance learning acquisition and increase the coupling of the brain's hemispheres—a debate over the murky limits of our neurological optimization has arisen as well.

Nootropics—the name given to a broad class of so-called “cognitive-enhancing” drugs—are all the rage in Silicon Valley these days. Programmers like nootropics because they’re said to increase productivity and sharpen focus without the intensity or side effects of a prescription drug like Adderall or modafinil.

12 Superfoods To Boost Your Brainpower

We've all had those days when we just can't seem to concentrate. And while there's no magic pill to bring us back to the height of our cognitive powers, there are some foods that have been shown to improve brain function, protect against age-associated cognitive decline and encourage focus and clarity.

Nootriment tells you how to boost your brainpower, improve memory, increase focus and enhance energy levels.

NootropicsHacks is a blog devoted to providing firsthand accounts of Nootropic use and delivering groundbreaking Nootropic news to our engaged followers.

Smart Drug Smarts is for people interested in brain health and optimization, and actionable applications of the latest breakthroughs in neuroscience.

Your source for all things nootropic related!

Nowadays a lot of attention and discussions are focused on nootropics, or smart drugs. For centuries, people have been in search of means to improve their physical and mental abilities, increase vitality and stress resistance.

Welcome to r/Nootropics, a reddit devoted to discussing nootropics and cognitive enhancers.

Never lose anything again. Are your things always running off? Not on our watch. Tile is a tiny Bluetooth tracker that helps find your lost stuff in seconds. Attach, stick, or place Tiles inside everyday items and keep track of them in our easy-to-use app.