Where in health am I? : Home / Health Cloud / StaynHealthy / Twins & Health

There are two things in life for which we are never truly prepared: twins - Josh Billings 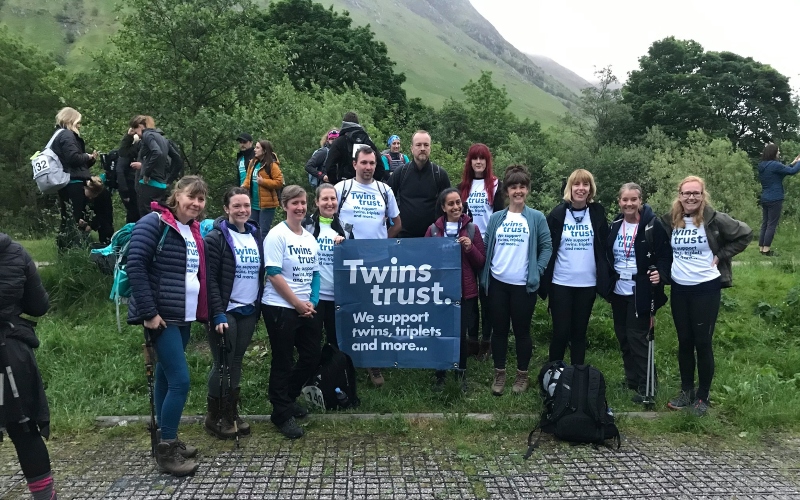 When Mylee and Cayla Simmermon were toddlers, even they couldn’t tell themselves apart. Their mom would catch Cayla staring into the mirror, waving, and shouting, “Hi, Mylee!”

She was mistaking her own reflection for her sister.

I met Mylee and Cayla on Aug. 6 at the annual Twins Days festival in Twinsburg, Ohio. It’s the world’s largest gathering of twins — thousands of identical pairs (as well as fraternal twins and other multiples) gather to celebrate this special kind of siblinghood.

Identical twins are a scientific enigma: No one knows why a fertilized human egg will sometimes split into two genetically identical embryos—but new research suggests that epigenetics have something to do with it.

After 35 years of sharing everything from a love for jazz music to tubes of lip gloss, twins Kimberly and Kelly Standard assumed that when they became sick with Covid-19 their experiences would be as identical as their DNA. The virus had different plans.

How to Eat When You're Pregnant With Twins, According to an RD

Here are four ways to make sure you're getting all the nutrients you need.

Identical twins carry genetic modifications no one else has

Distinctive pattern of chemical tags could reveal how twinning happens, lead to a test for “vanishing twins”

Studying twins has long offered insight into the interplay of nature and nurture. Epigenetics is the next frontier.

The Twins That Are Neither Identical nor Fraternal

So he began to dig. Gabbett eventually found a report on “sesquizygotic twins”: not identical, but not fraternal either. They’re somewhere in between. (Sesqui means “one and a half.”) Biologists had first proposed their existence in 1984, but it wasn’t until 2007 that doctors documented the first case of sesquizygotic twins.

This is why science loves twins

If researchers can understand “nature vs. nurture” in twins, it will be easier to figure out for all the non-twins out there. And that, said Chance York, an assistant professor at Kent State University, is why researchers make the yearly pilgrimage to Twinsburg.

Twins: A Gold Mine for Research

Twinsburg, Ohio is home to the annual Twins Days festival—which, in turn, is home to a revolving door of scientists looking to gather genetic data.

Can’t lose weight? You might be able to blame it on your parents—and their gut bacteria

First they looked at data from more than 3,600 twins to find out whether visceral fat—the body fat stored around the waist—is a good indicator of obesity. (Using twins helps researchers determine how much genetic versus environmental factors affect a condition.) They found that it was.

There’s a lot of disagreement over the extent of the danger, but we know that twins are five to seven times more likely to die during infancy than singletons. (Triplets, quadruplets, and higher-order multiples are at least 10 times more likely to die.) The chances of a disastrous outcome are still low in absolute terms, however. A

Doubling Up on Research Using a Database of Twins

Studies of twins allow researchers to explore "the eternal question of nature or nurture—why we are the way we are," says Paul Lichtenstein, the director of the registry.

Everything We've Learned from NASA's Study of Identical Twin Astronauts

By allowing their bodies to be sampled, observed, and tested for years, the Kelly twins have provided an amazing platform for understanding the challenges of spaceflight on human health. But it will take many more missions like the Twins Study to assess whether people can withstand the ravages of space travel over multi-year periods—especially when Earth is no longer visible just outside the spacecraft window.

Fraternal twins, identical twins and other types of twins

Sometimes a fertilised egg splits within a few days of conception to produce genetically identical twins. Because these twins come from one zygote, they are also known as monozygotic. Identical twins are the same sex.

Having Twins? 37 Is the Magic Number

Although this study is the largest systematic review to look at the safest weeks for delivery of twins, the authors suggest additional research because the limited data in the studies they found.

In NASA’s case, the study size is as small as it gets when it comes to twin studies, with just one pair, and they don’t have any non-identical twins to compare them to. Further, there are some other variables that need to be taken into account; the Kelly twins didn’t eat the same food all year and food is known to influence the gut microbiome, which NASA is studying. However NASA’s twin study is a first-of-its-kind study

How can a set of twins have completely different fathers?

Something didn’t sit right with the father: His twins looked starkly different, one with a full head of wavy hair and the other with fine, straight hair. He asked their mother for a genetic test to confirm that the children were actually his. Only one of them was.

While the basics of how identical twins originate is clear, the mystery lies in why. Identical twins arise from a single fertilized egg, or zygote, splitting into embryos with duplicate DNA, but what causes the split remains unknown.

Not all twins are identical and that’s been an evolutionary puzzle, until now

In human populations without access to medical care there seems little benefit to having twins. Twins are more likely to die in childhood than single births. Mothers of twins also have an increased risk of dying in childbirth. In common with other great apes, women seem to be built to give birth to one child at a time. So if twinning is costly, why has evolution not removed it?

Same same but different: when identical twins are non-identical

The rate of identical twins is consistent across the globe at about four in 1,000 births. This suggests it’s probably just a random biological phenomena not influenced by genetics.

Researchers looked at identical and fraternal twins in Denmark, Finland, Norway, and Sweden, who were part of the Nordic Twin Study of Cancer. They determined whether the twins had cancer from national registries. They found that risk of some cancers — notably skin, prostate, ovary, kidney, breast, and uterine cancer — was measurably influenced by genetics.

The Gift of Life, and Its Price

Scary. Like aliens. That is how Kerry Mastera remembers her twins, Max and Wes, in the traumatic days after they were born nine weeks early.

There Really Are So Many More Twins Now

Older women tend to have more twins than younger women—and older women are having more of the nation's babies. The researchers found this demographic phenomenon accounted for one-third of the increase. They attributed the rest of it to the increase in infertility treatments, specifically in-vitro fertilization and "ovulation stimulation medications."

Twin Lessons: Have More Kids. Pay Less Attention to Them

What 50,000 Swedish twins can teach us about education and longevity

These findings dovetail nicely with some other small but compelling evidence that finds school can increase a person’s IQ. Analyses have found evidence that each additional year in school adds 3.7 IQ points. And great IQ is also associated with longevity. The gap between the rich and poor in longevity continues to widen. If school is the ticket to a higher social class, it may still be the ticket to a longer life.

What can NASA’s twin study results actually tell us?

Not much can be said yet of the differences between the identical twins’ genetic makeup.

What Twins Can Teach Us About Nature vs. Nurture

The relative importance of nature and nurture has been debated for centuries, and has had strong — and sometimes misguided — influences on public policy.

What Twins Can Tell Us About Who We Are

In December 1988, two sets of identical twins in Bogotá became test subjects in a study for which they had never volunteered. It was an experiment that could never be performed in a lab, and had never before been documented. And it became a testament to the eternal tug between nature and nurture in shaping who we are.

We can all agree that the phrase "no man is an island" is a blatant lie—we're essentially alone in this world and all the more miserable for it. The only people excepted from this rule are identical twins, who often share every step of at least the first few decades of their existence with each other. Experiencing the same things, while looking exactly alike.

Supporting you through every milestone of your journey with twins, triplets or more.

Results from NASA’s Twins Study reveal some interesting, surprising, and assuring data of how a single human body adapted to and recovered from long-duration exposure to the extreme environment of space.

To provide a vehicle for celebrating the uniqueness of twins and others of multiple birth.

More Twins are Being Born Than Ever Before