Many women love them, but others are experiencing side effects - Kristen Philipkoski 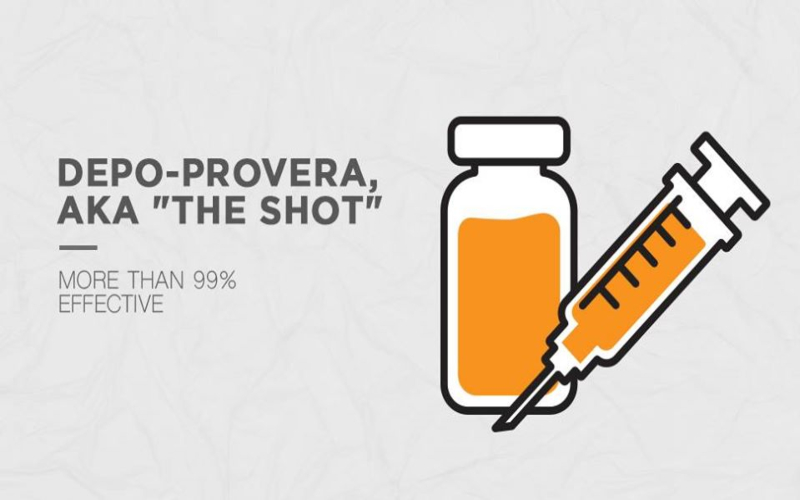 So many of us here took the Depo shot and weathered storms that we weren’t prepared for. Many of us still struggle years later.

Some of us experienced ill effects after the first shot, others after subsequent shots. For some, the problems started only when they stopped the shot. Many of us have been riddled with health problems that we didn’t have prior to using the shot.

We’ve experienced everything from a weakened immune system to pain so bad that we feel three times our age. Bones and joints are frequently impacted, why are we ignoring that black box warning anyway? We’ve experienced cancer, infections of all kinds. Even HIV.

The Depo shot is quite the concoction of dangerous chemicals. Here’s what you need to know

A few words on Depo Provera

I know that it’s difficult to find good information on long-term effects when it’s the users who have bad experiences that publicize them. It’s a bit like reading Amazon reviews for a product: lots of people use it once or twice and rate it well, but, of those who have used it for the long-term, only the disgruntled ones find it worthwhile to write a review.

I am going to share with you guys my experience of taking the Depo shot once. I didn’t take it again because I personally didn’t like it, but you maybe interested in the benefits of using it.

The Dangers of Depo: The World's Most Dangerous Birth Control

"The Dangers of Depo" is about the dangers, even potentially lethal effects, of the injectable birth control Depo-Provera. By sharing the controversial history of Depo, women’s stories, and explaining the scientific research regarding the shots’ many serious side effects, the authors hope women are better able to understand the drug so they can make truly informed choices.

Coming off Depo-Provera can be a woman’s worst nightmare

Considering that Depo-Provera completely suppresses normal reproductive endocrine function, it is not surprising that many women experience extreme or confusing symptoms once stopping it.

Depo Provera: What the NYT Did Not See Fit to Print

The sobering risks and side effects of every contraceptive drug and device are described on its drug label, posted on the FDA website. Learn the facts before you become the victim of a contraceptive-related injury or death.

So maybe you’ve heard of the birth control shot, a.k.a. Depo, Depo-Provera, or DMPA. Most people who use it go to a health care provider every 3 months to get it. But what if you were able to give the shot to yourself at home? No more making appointments, getting to the clinic, or waiting around. Sounds convenient, right? This option exists. It’s called subcutaneous Depo, or SubQ Depo for short.

The common theme from medical professionals was that every woman reacts to drugs differently. Until the promise of personalized medicine comes through, the right contraceptive choice will likely remain a process of trial and error.

“I Wouldn’t Recommend It to Anyone”: What We Can Learn from Women who have had Bad Experiences with Depo-Provera

The contraceptive injection Depo-Provera is causing baffling, quality-of-life threatening adverse effects for many women. Their expressions of fear, anger, regret, and frustration must be heard, acknowledged, and acted upon. Women considering or prescribed Depo-Provera deserve concrete and comprehensive information about the effects they might experience both while taking Depo-Provera and after stopping it, as well as full support from their health care providers to understand and manage the return to regular ovulatory menstrual cycles. Providers unable to meet these criteria should not administer Depo-Provera.

Contraceptive injections contain a progestogen hormone which is similar to the natural progesterone produced by the ovaries. There are three types of injection. Depo-Provera and Sayana Press protect you from pregnancy for 13 weeks. Noristerat protects you for eight weeks; it’s not commonly used in the UK.

Depo Provera Made Me Sick

Years ago, (somewhere in the early 2000s) I decided to start using a hormonal birth control. After doing some research, I thought that Depo Provera would be a good choice. It is administered by shot every three months, and is one of the most effective forms of birth control. Unfortunately for me, Depo Provera made me very sick – and the side effects are still here all these years later.

Getting Pregnant After Depo

So you’ve stopped your depo shots and now want to get pregnant. How long does it take to get pregnant after depo? And is there anything you can do to speed it up?

All About The Depo Shot — Depo Provera

Like the mini-pill, Depo is a great option for people who are unable to take estrogen, which is found in combined hormonal contraceptive pills and the patch.

Depo Provera (“Depo,” “the Shot”) is one of a family of progesterone-only contraceptive products. It is an injectable product-a shot. It is a really effective and convenient way to prevent pregnancy; you only have to think about it 4 times a year and in clinical studies, less than 1% of women get pregnant on it. (In real life, about 5% get pregnant – probably because in real-life some women didn’t get their shot on time.)

Depo-Provera, an Injectable Contraceptive, Does Not Raise H.I.V. Risk

The hormone shot — popular among African women who must use birth control in secret — is as safe as other methods, scientists reported.

About a week after getting the first injection, I started getting these debilitating headaches. And I mean, they were really BAD. I could hardly work. It was interfering with my job, my sleep, pretty much everything. After about of week of this, I made an appointment with my family doctor. I told her about my symptoms and she totally blew me off, saying, “Well, some people just get bad headaches.” Um, no they don’t…not like this.

A shot called Depo Provera seemed like the best option. It was affordable. She only had to take it once every three months and they had the shot in stock there at the office. So she took the shot. Over the course of a few months, Sen started to experience some serious changes in her mood and body. She gained 30 pounds and fell into a deep depression.

The Depo shot 101: Everything you need to know

Although it’s not as long-acting as the implant or IUD, the birth control shot does last longer than the pill or patch since every dose of the shot is effective for approximately three months.

For many women, injectable contraceptives have tremendous advantages: one shot of the popular Depo-Provera® protects for three months. It is safe and effective, with almost no risk of unintended pregnancy. Injectables have other advantages—with no pills to take daily, they are discreet. “This is a small village,” explained another Senegalese health worker. “Everyone knows what everyone else is doing.”

The ins and outs of the birth control shot: Depo-Provera side effects, effectiveness, and cost

Does the idea of only having to think about birth control every three months appeal to you? What if you could do it yourself, at home? (Are you intrigued yet?)

The shot contains progestin, a hormone that prevents your ovaries from releasing eggs. It also thickens your cervical mucus, which helps block sperm from getting to the egg in the first place. Worth considering even if you're afraid of needles... Because what's a little prick compared to a pregnancy?

WHO Affirms Use Of Birth Control Injections After Weighing HIV Risks

Women living with HIV, or at high risk of infection, should continue to use hormone injections to prevent pregnancy, the World Health Organization said Thursday. But the advice stressed that couples should use an additional protective method, like condoms, to prevent HIV transmission between partners. The update comes after an expert review of data on the link between hormone injections and HIV transmission. A study in Lancet Infectious Diseases last year found that hormone injections nearly doubled the chance that a woman would pass HIV to her partner, or contract it from an infected partner, as Shots reported.

Why I wouldn’t recommend the Depo Provera

This post is based on personal experiences while being on the depo provera. Please do not use this post as a literal medical reference and do seek professional help if you want to start or stop receiving the injection. To anyone thinking about starting on the depo, I would highly advise you to do your research and get as much information as you can about what it is, how it is supposed to help, for both endometriosis and as a contraceptive, and side effects of it.

So many of us here took the Depo shot and weathered storms that we weren’t prepared for. Many of us still struggle years later.

If you're considering using Depo, keep reading, hopefully you'll reconsider. If you've already taken it and are struggling with the aftermath, you'll likely find the site helpful. I hope so anyway! I created this site as a platform to share information, women's stories and to provide support to others that have been negatively affected by Depo.