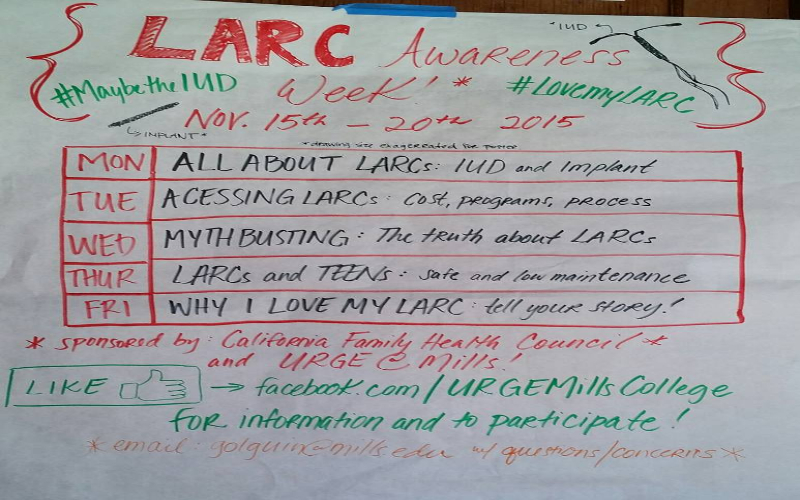 image by: URGE at Mills College

Imagine a future in which we can simply toggle the default on human fertility, so that accidental pregnancy is a thing of the past and women become fertile only when they want to become pregnant. By nature, adolescence switches our fertility default to “on” and it is stuck there for the next 40 years. Globally, 100 million women want to delay, space or limit child bearing but have no control over their fertility. Even women who are lucky enough to have contraceptives like Pills or patches or injections have to keep switching fertility back off.

Don’t want to take a contraceptive pill every day? These are the long-acting alternatives

The arrival of the pill in 1961 was pivotal in enabling women to control their fertility with a method unrelated to sex. Long-acting reversible contraception (LARC) methods add another dimension to contraceptive choice, freeing women from having to remember a pill every day. LARC methods include the contraceptive implant and hormonal intrauterine device (IUD), available in Australia since the early 2000s, and copper IUDs which have been around since the 1970s.

At any given time, nearly two-thirds of American women aged 15 to 49 are using contraception. More of them are turning to I.U.D.’s and implantable devices.

IUDs have two major selling points. First, they're crazy effective at preventing pregnancy — much better than the pill. Second, there's no human error involved in using one. Once it's in place, you don't have to think about it. The most important thing to remember? Don't let the online IUD horror stories scare you away.

Nearly a third of women are misinformed about the most effective forms of contraceptives, a new report finds.

Could The Most Effective Birth Control Soon Become The Cheapest?

The most effective reversible forms of birth control are mostly priced out of reach for millions of women who need it most—until now. An unusual partnership between a nonprofit pharmaceutical company and a traditional pharmaceutical distributor aims to increase access to IUDs (intrauterine devices) for U.S. servicewomen and in public clinics.

Long-acting reversible contraception (LARC) includes intrauterine devices (IUDs) and the subdermal implant. These methods are the most effective reversible methods of contraception, and have the additional advantages of being long-lasting, convenient, well liked by users and cost effective.

Approximately half of all pregnancies in the United States are unintended, which are associated with adverse health outcomes for both mothers and children. This public health challenge is greatest among teens and young adults...Incorporating young women’s perspectives on LARC methods into publicly funded family planning facilities’ efforts to provide these methods to a younger population may increase their use among young women.

A new study confirms that long-acting forms of contraception such as intrauterine devices and implants are better than birth control pills and patches at preventing pregnancies, giving doctors new ammunition to recommend these methods.

ParaGard vs Mirena: Which IUD is best for you?

The bottom line? IUDs are safe, effective, and totally reversible. Whichever IUD you and your provider decide is best for you, we all win with more long-lasting, low-maintenance birth control options available.

Unintended pregnancies have an enormous impact on the economic, social, psychological and physical aspects of women’s lives. International consensus supports the safety and efficacy of LARC as the most effective public health strategy to address this.

The IUD That Gives Women Options

While many women have now heard of IUDs, few know about Liletta—partly because it's produced by Medicines360, a San Francisco nonprofit edging into a product category long dominated by Bayer, the pharmaceutical giant that makes three of the four hormonal IUDs available in the US

Why is the most effective form of birth control—the IUD—also the one no one is using?

Up against bad PR and a lack of awareness, reproductive health groups are leading the charge to make the IUD a first line of defense against unplanned pregnancy. It won’t be easy.

What do you think of when someone says “birth control”? Chances are you think of a pack of pills. Or maybe you think of the ring and the patch, which are essentially pills delivered in other ways.

Why are 50% of pregnancies unintended in the US? Why are poor women more likely to have an unplanned pregnancy? One reason is that women can’t get the kind of birth control they want, when they need it.

Imagine a future in which we can simply toggle the default on human fertility, so that accidental pregnancy is a thing of the past and women become fertile only when they want to become pregnant.

Which IUD Should You Get?

Insertion is the same with all of them: not comfortable, exactly, but usually manageable. But the devices have different amounts of hormones — or none at all — and will change your periods in different ways. Among the hormonal IUDs, the higher the hormone amount, the more likely it is that your period will stop after six months to a year. Here’s how they compare to each other.

Best for: Women who want more than three years of use, and want to keep menstruating. Skip if: You don’t have the patience to fight with your insurance. Bayer, which manufactures Mirena and Skyla, developed this newest IUD which became available in October. Kyleena is approved for use in women regardless of whether they’ve had kids. It releases fewer hormones than Mirena, but more than Skyla, though it lasts the same amount of time as Mirena. This device might be a better option for women who want five years of pregnancy prevention but would rather get their period than not. In the approval studies, about 12 percent of women stopped getting their periods after one year, and 20 percent did after three years. But beware: If you’re interested in Kyleena, it could be a hassle to get your insurance to pay for it for the next five to six months until the temporary billing code designated for new drugs and devices becomes a permanent one, Dr. MacIsaac says - The Cut

Best for: Women on a budget. Skip if: You don’t want your period to disappear entirely. This device is a pharmacologic equivalent to Mirena (it has the same total amount of hormones), but was developed to be less expensive for women visiting family planning clinics who are either on Medicaid or lack health insurance. It costs providers $50 and they can pass on savings to their patients. It’s not technically a generic because it looks a little different and releases slightly less hormone on a daily basis, though there is the same amount of hormone in the device. Still, about the same number of women reported amenorrhea (no periods) with Liletta as with Mirena (Liletta’s rate is slightly higher after three years). It’s currently approved for three years but the manufacturer will be submitting five-year data to the FDA and will continue to study the same group of women for seven years. It’s possible that Liletta could last even longer than Mirena since the daily release is lower, but only further research can prove that - The Cut

Best for: Women with heavy periods. Skip if: You don’t want your period to disappear entirely. Mirena was initially approved for women who’d already had children, but that’s just because those were the women recruited for the study submitted to the FDA. Doctors prescribe it to women without kids all the time and, in fact, the American College of Obstetricians and Gynecologists has recommended long-acting reversible contraception as the first-line method for adolescents since 2012. Where ParaGard can make periods worse, a hormonal IUD could help improve painful periods — in fact, Mirena is also FDA-approved for the treatment of heavy menstrual bleeding, or menorrhagia. About 20 percent of women with a Mirena see their period stop after a year, as do a third of women who use it longer. Mirena is approved for five years but recent data says it’s effective for seven - The Cut

Best for: Women who like the idea of a smaller IUD. Skip if: You’re looking for a long-term commitment. This device is approved for three years and is specifically marketed to women who haven’t had kids. It’s smaller than Mirena, which makes it more appealing to people who haven’t had their cervix dilated, but we’re talking about the difference of a few millimeters, says Kristyn Brandi, MD, family planning fellow at Boston Medical Center. What is different is that it releases fewer hormones on a daily basis, meaning more women keep getting their periods on Skyla versus with Mirena — which is appealing if you would prefer to keep your normal bodily function intact, Dr. Brandi says. (Only about 6 percent of Skyla users stop getting their period after one year; 12 percent of users stop after three years.) That, and it’s only approved for three years. If you want contraception for longer, you should probably get a different IUD - The Cut

Prescription NuvaRing (etonogestrel/ethinyl estradiol vaginal ring) is a flexible birth control vaginal ring used to prevent pregnancy. Do not use NuvaRing if you smoke cigarettes and are over age 35. Smoking increases your risk of serious heart and blood vessel problems from combination hormonal contraceptives (CHCs) including heart attack, blood clots, or stroke which can be fatal.