Where in health am I? : Home / Health Cloud / StaynHealthy / Women's Health / Pregnancy / Apps

At one time, I hated the iPhone – but that was only before I used one for the first time – Chris Pirillo 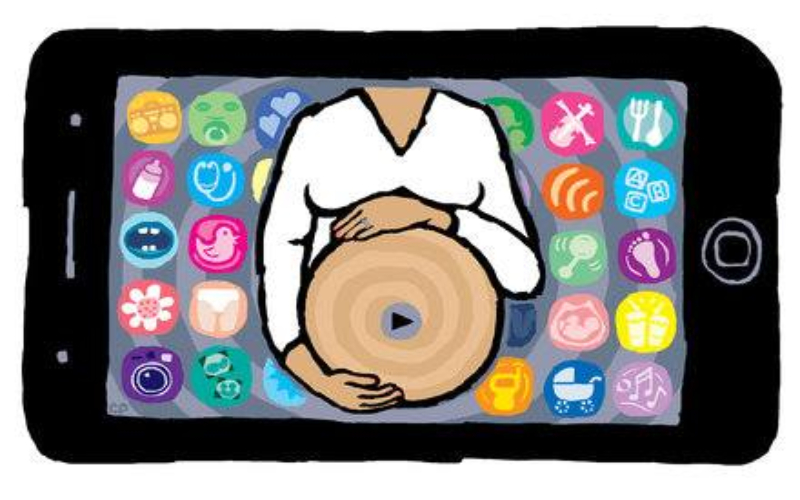 Three months ago, my wife, Chrysta, and I were driving along Melrose Avenue in Los Angeles when she let out a harrowing cry.

I knew exactly what to do: I reached for my iPhone and pressed the bright green “Start” button on the screen and continued to drive as I waited for her to stop wailing.

The app I was using is called Full Term, which kept track of the length and intervals of her contractions. The app was, as my wife and I learned while rushing to the hospital for the birth of our first child, more useful than we could have ever imagined.

I should preface this by saying that before we downloaded the app (a last-minute recommendation from a friend when I texted: “OMG! We’re in labor!”), I had scoffed at all these baby and pregnancy tools. After all, people have been having babies without apps since the dawn of humanity. Why do we need them now?

Turns out, I was wrong.

When my wife went into labor, for example, we could have tracked it the old-fashioned way: get a stopwatch, a pen and piece of paper, then jot down the duration of each contraction, and the time in between, and then somehow convey that information to our doctor while my wife endures the most intense pain of her life.

Or, we could open Full Term (a free app, though $1 donations are welcome) and press a green button to start, and a red one to stop. It gives you a detailed graph of the overall length and how far apart the labor pains are, which I could then text to our doctor. (We later discovered that we showed up at the hospital a tad early, by about 10 hours.)

In addition to the “go bag” that you pack for the hospital, you need a “go folder” of smartphone apps.

Pregnancy-related apps are not a niche category. According to a 2013 report by Citrix, a software company that tracks app usage, pregnancy-related apps were more popular than fitness apps. And at the Apple iTunes store, four of the top 10 paid medical apps are currently baby-related, including My Baby’s Beat, Baby Connect and Baby Heartbeats.

What do all these apps do? There are apps to help you get pregnant such as My Days and Glow, which help women track their ovulation and fertility. Others track the baby during pregnancy, including BabyBump and Baby Tracker. Still others track the birthing process, including My Birth Plan and Birthing Method. (There’s one for dads called the Guys Guide to the Delivery Room.)

And there are hundreds to help parents after the baby is born.

Before I discovered Full Term, Chrysta downloaded My Pregnancy Today, which shows expectant mothers what’s happening in the womb week by week. (At 12 weeks, the app said, our baby was the size of a lime.)

During labor, I found that the most useful app was WhatsApp, the messaging platform owned by Facebook. I added friends and family to a group thread, where I shared real-time updates, including audio of the baby’s heartbeat and photos of my wife looking as if she wanted to punch me in the face.

When our son was finally born, weighing a whopping 8 pounds 5 ounces, we quickly realized we had no idea what we were doing. This is where the app Baby Tracker, $5, came in. You can use it to track how often your baby poops, how much the baby sleeps and, if you’re breast-feeding, how long you feed for. It can also keep track of which breast the baby last fed on, though my wife found it easier to put a rubber band on her wrist.

While your baby’s bowel movements may not seem fascinating at first, you will have riveting conversations about it with your pediatrician. And when you consider that diapers are changed 10 to 12 times a day, that’s the contents of more than 80 diapers a week to keep track of — and to discuss.

Now that our son is 3 months old, the app we rely on most is Sound Sleeper, $4 (with a limited free version), which emulates a variety of white noises. Our baby likes to fall asleep to ocean waves, but when he has a meltdown, the only thing that seems to soothe him is the sound of a vacuum cleaner.

Last week, we discovered a new app called the Wonder Weeks, based on the best-selling book by Frans X. Plooij and Hetty van de Rijt, that details the rapid changes taking place these first weeks of life, and why babies go through “fussy phases.”

But there’s one thing I want to make clear. By no means am I suggesting that we give babies iPhones. Many pediatricians, including mine, strongly advise against exposing newborns to the glowing screens of smartphones and tablets. I could not agree more.

Babies are soaking up the world around them, and their little neurons and synapses are being formed each day. Simple shadows and colors can be overwhelming for some babies. The last thing we want to expose them to are super-bright screens with fast-moving graphics, Additionally, doctors warn that the blue light from screens can reduce melatonin levels, which affects sleep.

Speaking of sleep, I haven’t been able to find an app that helps with sleep deprivation. I’m pretty sure there’s a market for that app, especially among new parents.

You Give Apps Sensitive Personal Information. Then They Tell Facebook

Wall Street Journal testing reveals how the social-media giant collects a wide range of private data from developers; ‘This is a big mess’

The App That’s Like A Virtual Midwife For Pregnant Women

In 2014, the Bonzun app was launched to target pregnant woman. It acts as a personal pregnancy coach with symptom checker, so women get the required help and know when to seek emergency care.

Period-tracking apps are not for women

The golden age of menstrual surveillance is great for men, marketers, and medical companies.

When I found out I was pregnant, like many women, I downloaded a couple of apps—BabyCenter and What to Expect (the latter is owned by Mashable’s parent company)—to track my pregnancy. I loved learning that my baby was the size of a chia seed, and then a lentil, and then a blueberry. But I hadn’t considered the ramifications of updates when a pregnancy may not be viable.

Even if you don't resort to extraordinary measures, getting pregnant the old-fashioned way can get ... complicated. Let tech help out.

Looking to plan a pregnancy, or prevent one? Get an assist from one of these cycle-tracking apps.

Why You Should Not Trust Fertility Apps—Yet

The fertility awareness methods they use are real science, but the apps haven’t shown they can deliver the same standard of care.

‘Fitbit for your period’: the rise of fertility tracking

Investors are pouring money into apps that allow women to track their fertility. Can tech companies use data to change the world of women’s reproductive health?

Pregnancy Apps Do Everything but Ease Labor Pains

Pregnancy-related apps are not a niche category. According to a 2013 report by Citrix, a software company that tracks app usage, pregnancy-related apps were more popular than fitness apps. And at the Apple iTunes store, four of the top 10 paid medical apps are currently baby-related, including My Baby’s Beat, Baby Connect and Baby Heartbeats.

For whatever your pregnancy and parenting needs are, better believe there’s an app for it. Here, our favorite mom and dad helpers.

Aaptiv offers a safe, effective maternity fitness program designed and led by expert pre- and post-natal certified trainers. Each workout is progress toward a healthy pregnancy and a strong delivery.

BabyBump is a pregnancy app that keeps you informed about your pregnancy and provides feature-rich tracking tools.

Fertility awareness methods and apps can help women better understand their bodies, are relatively cost-effective, and have no side-effects. Yet at the same time, the apps rely on dedicated daily monitoring and data entry, and strictly abstaining from unprotected sex for several days each month.

Put on your headphones and drift into deep relaxation as you focus on having a positive and rewarding pregnancy.

Totally Pregnant gives you what you need, right when you need it. Pregnancy jeans? Recipes for morning sickness? Vlogs with real talk from moms-to-be all around the world? Yep, this pregnancy app has all that and more - The Bump