Where in health am I? : Home / Health Cloud / Challenges / Blood / Porphyria

Because now, I have a rare disease. I mean, I’ve had it all along, but I didn’t know it until two weeks ago. And when I say rare, I mean RARE. Rarer than a straight male ballet dancer. Rarer than a steak that still moos. Rarer than an LA snow day. You get the idea - Sabrina 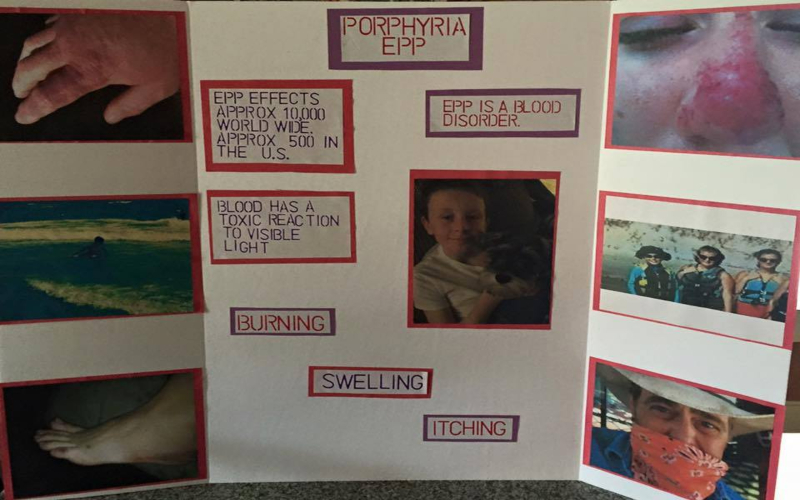 What Would a Porphyric Do?

I’ve been getting a lot of messages and emails lately from people who are new to the world of porph, or who are waiting for a diagnosis. It’s driving me nuts. Not that I’m getting contacted,  (AT ALL! Keep ’em coming!) but that so many people have one of the same two stories: 1. They’ve been diagnosed, and now are facing a world of doctors with no information for them, or B. They’ve done their research, their symptoms match up, and they’re desperately seeking a medical professional to believe them and test them PROPERLY, so that they can get a diagnosis.

I have to say, I’m pretty darn lucky that my story went the way it did. I only spent 4 agonizing hospitalized days before I was handed…

After decades of misdiagnosis, including Polycystic Ovarian Disease, Endometriosis, Crohn’s Disease and depression, a 24-hour urine sample revealed Coproporphyria (one of the many porphyrias), a rare genetic blood disorder that 50% of ER physicians have never heard of.

Born to the Purple: the Story of Porphyria

Porphyrins are light-activated chemicals that can be used to combat ills including tumors and diseases of the eye. But they have a dark side: when the wrong forms of them build up in the body, they cause a disease called porphyria.

Mr. Naifeh says that some doctors cherry-picked the artist’s symptoms to suit their own specialties. He cites some diagnoses, made over the decades, that he considers unlikely. One is acute intermittent porphyria, a metabolic disorder that can cause delirium and may have caused British King George III’s bouts of insanity.

From An Enlightenment King To Enlightened Princes: Mental illness And The Royal Family

So why did the theory of porphyria gain such traction over the years? MacAlpine and Hunter were disillusioned. They were fed up with psycho analysis, and instead believed that most mental disorders were caused by either known (such as porphyria) or as yet unknown organic physical conditions. Diagnosing an organic metabolic disorder in one of the most famous “madmen” in history would be a wake up call to modern psychiatry, and also remove the stigma or taint of mental illness from the Royal Family.

My mother had struggled for several years after I was born to get doctors to talk to her about porphyria, but their lack of knowledge of this rare disorder and unconcern led her to reluctantly drop it. And that side of my family never talked about porphyria or the possibility that I could have inherited it.

Pigments that turn caustic on exposure to light can fight cancer, blindness and heart disease. Their lightinduced toxicity may also help explain the origin of vampire tales.

“Has anyone ever mentioned the word porphyria to you?” he asked. She’d never heard of it. He wasn’t certain that’s what she had; he hadn’t examined her or reviewed her medical records, but the involvement of both types of nerves suggested this rare disease, and he thought she should discuss the possibility with her doctors.

Porphyrins: One Ring in the Colors of Life

It should come as no surprise then, that when the porphyrin pathway is disrupted, there can be remarkably far-reaching consequences. Derangements of porphyrin metabolism may have left their marks on the legacy of King George III and the founding of the United States, and on the legend of Dracula. Disruption of porphyrin metabolism can also be useful—for example, in the development of herbicides.

What Would a Porphyric Do?

I’ve been getting a lot of messages and emails lately from people who are new to the world of porph, or who are waiting for a diagnosis.

The Adventures of Sabrina: Porphyria and All

A whole entire blog about my swell disease.

The APF is dedicated to improving the health and well-being of individuals and families affected by Porphyria.

This blog is all about Caitie and what she and her family go through each and every day...

I have a rare blood disorder called Acute Intermittent Porphyria. It's one out of a group of eight porphyrias. Aip is an inborn error of metabolism. Basically, my body has a problem making heme, which is essential to bind oxygen and iron to blood cells. It causes, simultaneously, anemia and iron toxemia; also porphyrin presursors can build up in your blood to a toxic level

The Professionals section contains the same information in more technical terms, as well as a lot of additional information about specific areas of porphyria. Lay people will want to browse through these pages to find more detailed information once they have used the For patients pages to gain an understanding of the underlying concepts and the terminology.

Porphyria: A Royal Pain in my Ass

We now know that there are at least eight types of porphyria, and that the clinical manifestation of each type is not the same. A common feature of all porphyrias is the accumulation in the body of "porphyrins" or "porphyrin precursors." These are normal body chemicals, but they do not normally accumulate. Each type of porphyria is determined by deficiency of a different enzyme.