Where in health am I? : Home / Health Cloud / Challenges / Blood / Vitamin Deficiency Anemia

The doctor sees all the weakness of mankind; the lawyer all the wickedness, the theologian all the stupidity - Arthur Schopenhauer 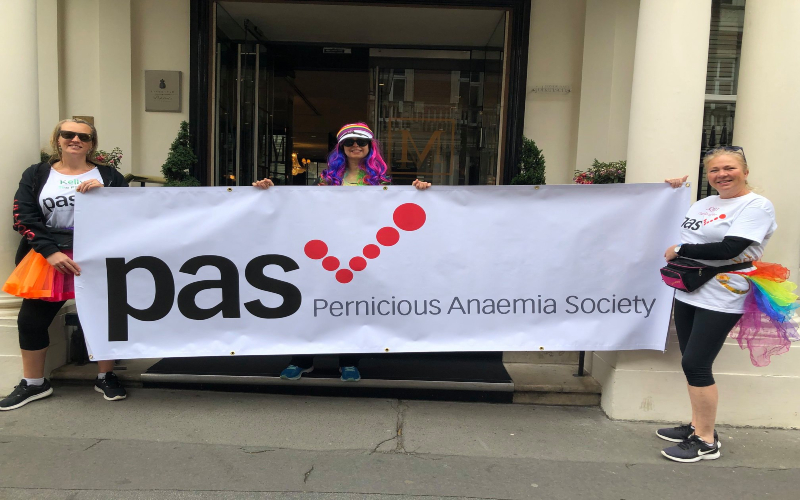 image by: The Pernicious Anaemia Society

The lower limit of normal for Vitamin B12 has moved from 200 during my residency in the 80’s to a high of 287 in the mid ‘90s and has hovered at a more or less constant 220 ever since.  The lab report always comes with a  caveat: if the level is over 400, replacement rarely benefits the patient, but between 220 and 400, some people will benefit from B12 shots...

In med school and residency, they taught us not to test anyone under 40, and not to test if the blood count (CBC) showed normal looking white cells without extra lobes in their nuclei, and normal, rather than large, red cells. By the time I’d been out of postgraduate training for ten years, I recognized I’d gotten a poor substitute…

More than you wanted to know about pernicious anemia, vitamin B12, folic acid, and rheumatoid arthritis

Vitamin B12 works in concert with folic acid in several critical steps of blood manufacture and nerve repair. Adequate doses of folic acid can mask a deficiency of vitamin B12 in the blood while the nervous system deteriorates irreversibly. I‘ve seen a few cases of advanced B12 deficiency and they weren’t pretty. Once B12 injections were started the progression stopped but every single one was left with permanent neurologic damage, some looking like multiple sclerosis and some looking like Alzheimer’s.

A three-pack of vitamin deficiencies

Vitamin B12 comes only from animals or things resembling animals; human beings don’t make it and have to ingest it. Most people in the US get enough B12 from eating meat, eggs, and milk. Strict vegetarians (such as Hindus) in third world countries get enough insect contamination in their grains to fulfill their B12 needs.

As the Stomach Churns: The Side Effects of Acid Suppression

Patients taking the strongest acid blockers for two years or more had a 65 percent increased risk for becoming B12 deficient.

There are many causes of megaloblastic anemia, but the most common source in children occurs from a vitamin deficiency of folic acid or vitamin B12.

What Vitamin B12 Can Do For You

PA is an autoimmune disease that, by attacking parietal cells in the stomach lining, effects low gastric acid secretion and an inability to absorb vitamin B12. Now that we know that the mechanism of the disease is low vitamin B12, progression can be easily averted by B12 repletion through injections, nasal spray, sublingual supplements, etc.

The original objects of the society still remain the core of our activity – namely providing information help and support not only to sufferers of Pernicious Anaemia but also their families and friends.

Enlightening us on B12 and its relationship to our health.

Raise awareness of this condition amongst doctors and the general public, so that people can be diagnosed appropriately • Explain the signs and symptoms that a doctor or person who is diagnosing themselves should look out for, and how to make sure that you reach the right diagnosis and don't confuse B12 deficiency with something else • Ensure treatment is tailored to the needs of the patient, and where possible, make treatment available free at the point of need.

Blog about my life with pernicious anemia as a 20 year-old including the ups, downs, details, and coping methods. From pre-discovery to my present daily life, this is my story. I strive to keep a positive outlook on my condition and my life and encourage others to do the same. Hoping to connect with others who have Pernicious Anemia and also find those who share this condition at a young age. *I am not a doctor and I do not have any medical training or background.

Living with Fibromyalgia and Pernicious Anemia

I often wonder how two such disorders could make someone feel as I do? I have been tested for all sorts of things and it always goes back to fibromyalgia and pernicious anemia.

he Vitamin B12 Patch has superior absorption using patented biotechnology. Our patch is the most trusted original B-12 Patch on the market and is the only one developed by a team of leading scientists in their field.

People can develop low levels of this important vitamin in three main ways: • From the lack of a protein in the stomach that helps the body absorb vitamin B12. The protein is called intrinsic factor. Intrinsic factor is made by special cells in the lining of the stomach. In some people, these cells are destroyed by the body's immune system or as a result of stomach surgery. When this happens, intrinsic factor is not produced and vitamin B12 cannot be absorbed. This is the most common cause of vitamin B12 deficiency. •From not getting enough vitamin B12 in the diet. This can be the result of eating a strict vegetarian diet or a poor diet due to factors such as aging or alcoholism. •From certain intestinal disorders that interfere with the absorption of vitamin B12, such as Crohn's disease and intestinal infections.

The most common cause of pernicious anemia is the loss of stomach cells that make intrinsic factor. Intrinsic factor helps the body absorb vitamin B12 in the intestine. The loss of parietal cells may be due to destruction by the body's own immune system. Pernicious anemia can cause permanent damage to nerves and other organs if it goes on for a long time without being treated. It also raises the risk for developing stomach cancer.

Vitamin B12 is present in meat and animal protein foods. Absorption occurs in the terminal ileum and requires intrinsic factor (IF), a secretion of gastric mucosal (parietal) cells, for transport across the intestinal mucosa. In pernicious anaemia, IF production is deficient. It is believed to be an autoimmune disease. Helicobacter pylori infection has been mooted to be an initiating factor, with subsequent autoimmune changes affecting the gastric mucosa.