Where in health am I? : Home / Health Cloud / Challenges / Infections / Bacteria / Pseudomonas

If a bacterium is trying to infect you, it won't secrete alone, because your immune system will block it. Bacteria will hide until they can all act together and make an impact - Bonnie Bassler 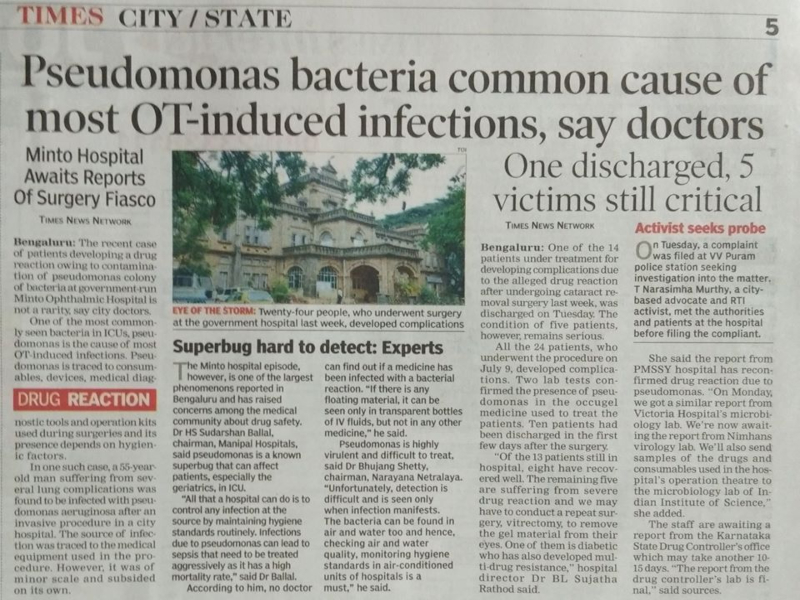 This Will Make You Never, Ever Want To Get In A Hot Tub Again

But while a soak in the hot tub may sound relaxing, is it hygienic? Does shaking in a few chemicals actually do the trick? We turned to a couple of experts -- Michele Hlavsa, RN, MPH, an epidemiologist and chief of healthy swimming for the Centers for Disease Control of Prevention and Charles Gerba, Ph.D., a professor of microbiology and environmental studies at The University of Arizona -- to find out.

It turns out, you can pick up some unappetizing and even dangerous bugs from a hot tub dip, both from the water itself and also from the steamy atmosphere around it. Unlike a pool, the warmer temperature of a hot tub makes it more difficult to maintain the proper disinfectant levels…

There is growing evidence that bacteriophages — viruses that specifically infect and kill bacteria — may be a promising option to fight bacterial infections, particularly those with multiple antibiotic resistance which are difficult to treat.

Pseudomonas Aeruginosa Infection: Here's How It Spreads In The Hospitals

Pseudomonas infections not only affect the sick but can also occur in healthy individuals. It usually happens after being exposed to infected water. Inadequately chlorinated swimming pools and hot tubs can spread the infection among healthy people who might not even have any symptoms. Sometimes they can cause minor issues like skin rashes, ear infections (in children) and eye infections (among those who use extended-wear contact lenses). Widely involved in infections acquired in healthcare settings, Pseudomonas aeruginosa affects severely ill hospitalized patients, especially those on breathing machines, catheters or those with burns or surgical wounds. T

In the study, researchers discovered that if attacked while swarming — by an antibiotic or a virus that infects bacteria (bacteriophage) — P. aeruginosa bacteria start producing a molecule called Pseudomonas quinolone signaling (PQS) that tells other bacteria in the group to steer away from danger.

Serious Pseudomonas infections usually occur in people in the hospital and/or with weakened immune systems. Infections of the blood, pneumonia, and infections following surgery can lead to severe illness and death in these people. However, healthy people can also develop mild illnesses with Pseudomonas aeruginosa, especially after exposure to water.

Pseudomonas syringae is not the only ice nucleator, but is the most common, and all varieties share a common cell wall protein structure that serves as a scaffold for free-floating water molecules.

The experiment was carried out by Joao Xavier of Memorial Sloan-Kettering Cancer Center and his colleagues. They studied a common species of bacteria called Pseudomonas aeruginosa. These microbes live pretty much everywhere — in dirt, in water, on our skin. Under certain conditions, they also invade our bodies and cause dangerous infections. People with cystic fibrosis, for example, can get P. aeruginosa infections in their lungs, which are often impossible to eradicate. To better understand the biology of this pathogen, Dr. Xavier began to study how it searches for food.

What is the Appropriate Treatment for a Pedal Puncture Wound?

For patients presenting 24-72 hours after injury, prophylactic oral antibiotics against Streptococcus and Staphylococcus is usually begun empirically, with appropriate initial management and followup. Patients presenting > 72 hours after injury with pain, erythema, swelling etc, should be started on parental antibiotics against Streptococcus and Staphylococcus, and also against Pseudomonas if foot gear had been worn.

Your Soap Has Bacteria In It, But It Still Gets You Clean

Bacteria are everywhere on your skin, hair and eyelashes, to name a few of their homes. Bacteria are even in your soap, the very thing you thought washed all the bacteria away.

This Will Make You Never, Ever Want To Get In A Hot Tub Again

Unlike a pool, the warmer temperature of a hot tub makes it more difficult to maintain the proper disinfectant levels that kill certain germs, Hlavsa explains. One common germ is Pseudomonas aeruginosa, which can result in an infection called Pseudomonas folliculitis, or the aptly-chosen nickname, "hot tub rash."

P. aeruginosa is an opportunistic pathogen which rarely causes disease in healthy persons. This organism is commonly considered in the differential diagnosis of a number of gram-negative infections. It is associated with nosocomial infections, often severe and life-threatening, especially in immunocompromised hosts.

Pseudomonas can multiply in an extraordinary assortment of environments including eyedrops, soaps, sinks, anesthesia and resuscitation equipment, fuels, humidifiers and even stored distilled water. It has also been reported in kidney dialysis machines.

P. aeruginosa is an opportunistic pathogen that can cause a wide range of infections, especially in immunocompromised people and people with severe burns, diabetes mellitus or cystic fibrosis. P. aeruginosa is relatively resistant to many antibiotics but effective antibiotics include imipenem , meropenem, ceftazidime, ciprofloxacin and gentamicin.