Once you are real you can't become unreal again. It lasts for always - Margery Williams, The Velveteen Rabbit 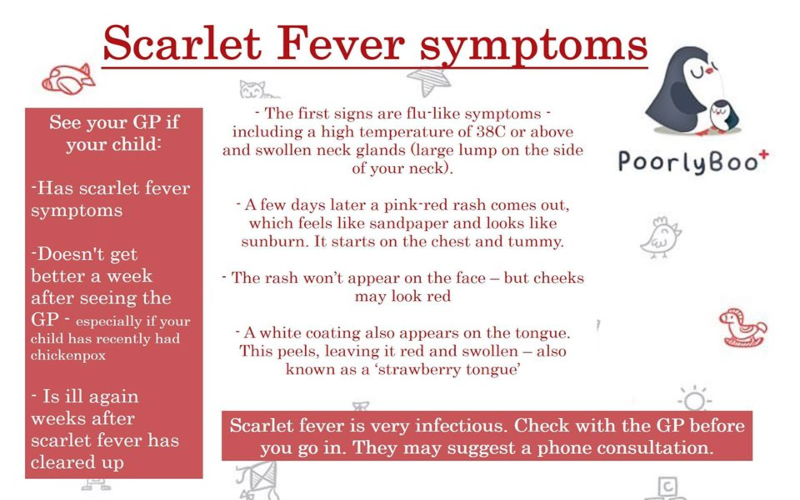 Scarlet fever is pretty rare these days, but it hasn't been completely eradicated. It's easily identifiable by its rough and itchy rash...

Scarlet fever is a bacterial infection that is spread around via coughs and sneezes, as well as by touching infected surfaces (utensils, towels, toys and so on). Although relatively uncommon, it is incredibly infectious – and although anyone can get it, it most commonly affects children between the ages of four and eight. If your child hasn't had scarlet fever by the age of 10, the chances are they never will, because they might well have developed an immunity to it by then.

The culprit is the…

The mysterious return of scarlet fever

The infection used to be a leading killer of children — and it's making a comeback.

Although the disease nearly disappeared during the 20th century, several countries, including the UK, have recently experienced a re-emergence of scarlet fever. In this article, we discuss the management of scarlet fever

Scarlet Fever, a Disease of Yore, Is Making a Comeback

The reason for the sudden surge remains a mystery.

Thousands of children are being infected with scarlet fever as the once feared Victorian disease, a leading cause of infant deaths in the early 20th century, makes a startling comeback.

Often the first symptoms of scarlet fever are a sore throat or a skin infection, accompanied by a high temperature. The rash will appear up to 48 hours after the onset of the fever, and it is identifiable by its pinkish-red colour and sandpaper like texture. It commonly appears around the ears and neck, elbows, inner thighs and groin and, while it's unlikely to show up on the face, your child might look a little flushed.

5 Old-Time Diseases That Are Making a Comeback

Largely forgotten over the past century thanks to the rise of antibiotics, this bacterial infection is perhaps best known for the role it plays in the classic children’s book The Velveteen Rabbit. (When the young protagonist comes down with scarlet fever, all his toys, including his beloved rabbit, must be destroyed, on doctor’s orders.) Researchers have recently been tracing scarlet fever’s comeback in Asia (with more than 5,000 cases over the past five years in Hong Kong and 100,000 in China) and the United Kingdom (roughly 12,000 cases over the past year).

Scarlet fever – or scarlatina – is a bacterial infection caused by group A Streptococcus or "group A strep." This illness affects a small percentage of people who have strep throat or, less commonly, streptococcal skin infections. Scarlet fever is treatable with antibiotics and usually is a mild illness, but it needs to be treated to prevent rare but serious long-term health problems. Treatment with antibiotics also helps clear up symptoms faster and reduces spread to other people.