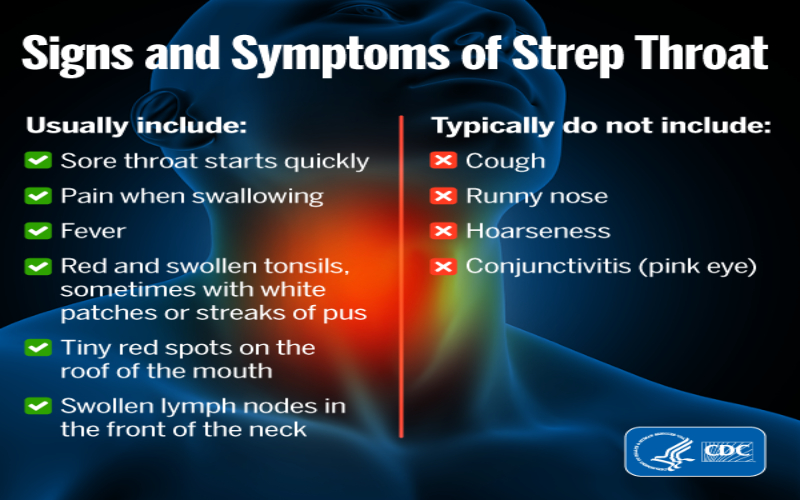 Strep Symptoms: When to Use Antibiotics

School is in full swing, it’s fall, and strep-throat season is about to begin.

All physicians and most parents by now know the importance of recognizing and adequately treating a throat infection caused by Group A streptococcal bacteria. These organisms, if not stopped in their tracks by appropriate antibiotics, can result in rheumatic fever and permanently damaged heart valves, among other serious complications.

Thanks to penicillin, which readily kills strep bacteria, rheumatic fever has all but disappeared in countries like the United States. Now physicians are worried about overtreatment, the prescription of antibiotics for children whose sore throats are caused not by…

What is the performance of rapid tests for the diagnosis of strep throat in children?

The microbe is slowly but surely starting to fight back.

A specific immune deficiency may explain why some families seem so prone to this problem.

Wondering If You Need A Strep Test? Crowdsourcing Might Help

Asking people about just two symptoms — fever and lack of cough — is the most important. Combining that information with an odds ratio based on the number of strep cases in the area in the past two weeks, predicted the likelihood that someone would actually test positive for strep about as well as scoring systems used by clinicians.

In England, Scotland, Belgium, or the Netherlands, physicians will not use a diagnostic test, and the decision to prescribe antibiotic will depend mainly on the patient’s illness severity.

Antibiotics for Strep Do More Harm Than Good

The administration of antibiotics for strep throat, endorsed universally by practice guidelines and professional societies, is based exclusively on data from the world’s most concentrated epidemic of rheumatic fever. Using this to guide modern therapy is like administering antibiotics to prevent bubonic plague.

How to Tell When Your Sore Throat Is Strep

But strep throat can almost always be distinguished from a viral sore throat on clinical grounds alone. The patient is usually younger than 50, and the sore throat comes on like gangbusters within hours or overnight, making swallowing so difficult that drooling can occur.

My Son Almost Lost His Mind From Strep Throat

When Melanie's son John started acting strangely, none of the doctors knew what was wrong, until his school nurse spoke up. Internet research revealed that PANDAS — pediatric autoimmune neuropsychiatric disorder associated with streptococcus — is a condition brought on by exposure to the bacteria that causes strep throat, though it may also be caused by a virus or a parasite.

If your child gets strep throat, buy a new toothbrush and have her start using it two days after starting the antibiotics. If the same toothbrush is used, bacteria are still present on the bristles and can re-infect your child after the round of antibiotics is completed.

Symptoms of strep throat typically appear several days after exposure to the bacteria. The most common symptom is a sore throat. Individuals may also have trouble swallowing, and the tonsils and lymph nodes may feel swollen. Some individuals may experience fever, stomach ache or vomiting, fatigue or headache.

Strep Symptoms: When to Use Antibiotics

Symptoms of a strep throat and a sore throat caused by a virus can overlap (children may experience stuffy noses, coughs and sneezing with a strep infection as well as with a cold), further complicating a doctor’s decision on whether to treat the illness or to let nature take its course.

5 Steps to a Speedy Recovery From Strep

Strep throat doesn't just run in our house; it gallops. It enters with force, knocks us to our knees and just when we think we've kicked it, it appears again for an encore. They say that fall and winter are the peak seasons for strep, but in our house, strep knows no season. It is timeless, enduring and a royal pain in the... throat.

Research has shown that it is difficult to confidently tell strep throat from more common viral infections. The presence of a runny nose may be a pointer to a viral infection.A higher fever and predominantly sore throat might make strep infection more likely. Throat swabs can help in diagnosis, although does not 100% confirm that the sore throat is being caused by the strep infection,as a proportion of healthy people(10 to 15 percent) may carry strep in their throats. An antibody tests on the blood ,showing a rise over 2 weeks can confirm strep infection,but this is not practical in the management of most strep sore throats.

While many people use the terms sore throat, tonsillitis, and strep throat interchangeably, there are significant clinical differences among these conditions.