Where in health am I? : Home / Health Cloud / Challenges / Infections / Clostridium Difficile

C. diff infection not only is caused by antibiotic use; it is also treated with antibiotics. That pushes patients into a downward spiral in which the microbiome slides further out of balance...Fecal transplants stop that spiral cold - Maryn McKenna 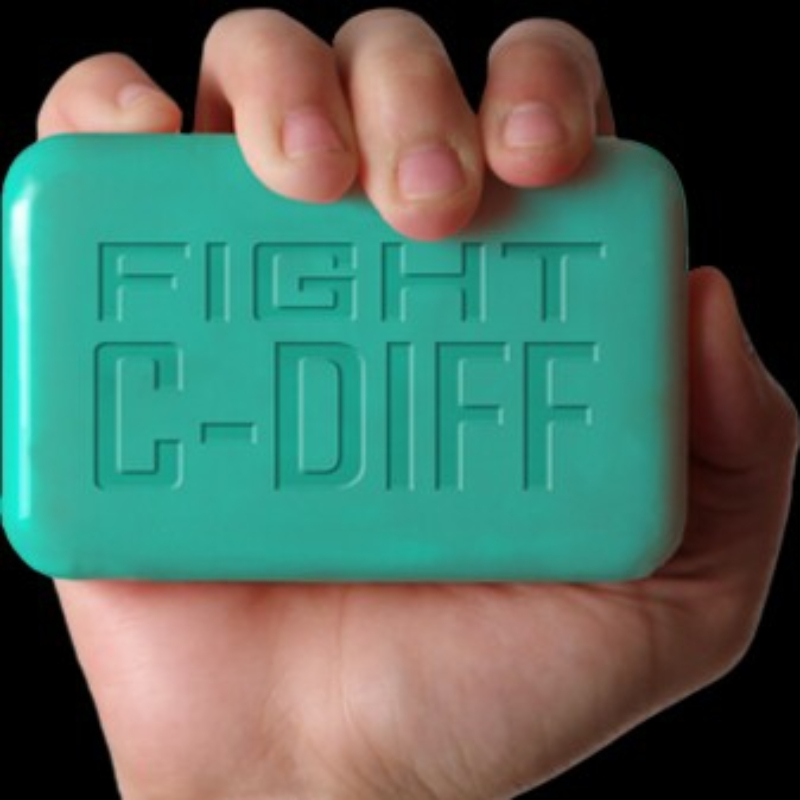 image by: My battle with Clostridium difficile Infection Cdiff

Dangerous Infection Tied To Hospitals Now Becoming Common Outside Them

Named from the Greek kloster, for spindle, a class of bacteria known as Clostridia abounds in nature.

Staining deep violet under the microscope, they appear as slender rods with a bulge at one end, like a tadpole or maple seed. They thrive in soil, marine sediments and humans. They live on our skin and in our intestines.

And sometimes, they can kill you.

Most strains are harmless, but tetanus, botulism and gangrene are caused by clostridial species. Vaccination, sanitation and improved medical care have made these infections less common, but one variety has been difficult to contain.

Clostridium difficile, or C. diff, can cause diarrhea and a life-threatening…

There are several reasons for this paradox. The current antibiotics used in clinical practice kill many beneficial bacteria in the gut as well as the pathogenic target organism. This loss of good microbes causes an unhealthy shift in the bacterial population in the gut that is referred to as dysbiosis. After the beneficial bacteria are wiped out, C. difficile occupies the void left behind.

Antibiotics Weren’t Used to Cure These Patients. Fecal Bacteria Were

In a small study, doctors used so-called fecal transplants to treat a serious gut infection in patients. The transplants, from healthy donors, were as effective as antibiotics.

If that case of diarrhea just doesn't get better, your heartburn drug could be the reason. The Food and Drug Administration just warned doctors and consumers that popular medicines called proton pump inhibitors may raise the risk for chronic diarrhea caused by Clostridium difficile, a bacterium that you'd rather not have colonizing your intestines.

Revealed: The secret superpower that makes C. difficile so deadly

The UVA researchers found that the immune response to C. diff causes tissue damage and even death through a type of immune cell called Th17. This solves a longstanding mystery about why disease severity does not correlate with the amount of bacteria in the body but, instead, to the magnitude of the immune response. It also explains why patients with inflammatory bowel disease (IBD) are more likely to suffer severe C. diff infections and more likely to die from them.

The main risk factor for CDI is taking antibiotics, which is why doctors discourage unnecessary antibiotic use. Ironically, first-line treatment for CDI is also antibiotics. About 20% of people treated with antibiotics will develop recurrent infections, and the best way of clearing recurrent CDI is with FMT. This is supported by several guidelines. The reason why FMT works so well is largely unknown, but generally speaking it restores important helpful bacteria that help protect against CDI. But while supported by guidelines, FMT is still considered investigational and is not currently FDA-approved.

The Latest Poop On Fecal Transplants Vs. Antibiotics For C. Difficile Diarrhea

How can more poop actually help with severe diarrhea? Isn't that like asking for buckets of water during a flood? Well, when the diarrhea is caused by the antibiotic-resistant bacteria Clostridium difficile, a poop (scientifically called fecal) transplant may help get to the bottom of the problem, according to a research letter published in the New England Journal of Medicine.

Clostridium difficile Is More Common Than You Think

Despite the numbers, for the most part, the occurrence of C. difficile infection has been isolated to one single environment – the hospital. Yet other areas, such as long-term care facilities, may also be burdened with this pathogen. But even in the community, people may become infected. According to models used to represent the United States, the rate of transmission is estimated to be about 0.1%.

Wide Use of Antibiotics Allows C. Diff to Flourish

Dr. Gerding foresees the possibility that people taking an antibiotic might simultaneously receive a dose of live therapeutic bacteria that can prevent colonization by hazardous organisms. “If this works, it will be huge in preventing transmission of C. diff.,” he said.

Behind One Hospital's Fight Against Deadly Infection

Nationwide, about one in 20 patients entering a hospital will get a potentially deadly infection, accounting for some $33 billion in preventable costs, according to the federal Department of Health and Human Services. Dangers lurk not only in vulnerable places like operating rooms. Recent studies have shown that some of the most common surfaces, from sink faucets to TV remote controls, can harbor the most deadly bacteria.

Clostridium Difficile Is the New MRSA

Just when you thought it was safe to go back in the hospital there's a tough bug to worry about. Even as hospitals are taking bolder steps to fight MRSA, a nasty infection often contracted during hospital stays, another microbe is quickly becoming more common: Clostridium difficile.

Clostridium difficile infection is responsible for approximately 3 million cases of diarrhea and colitis annually in the United States. The mortality rate is 1 to 2.5 percent.

Far more could be done to stop the deadly bacteria C. diff

A USA TODAY investigation shows that C. diff is far more prevalent than federal reports suggest. The bacteria is linked in hospital records to more than 30,000 deaths a year in the United States– about twice federal estimates and rivaling the 32,000 killed in traffic accidents. It strikes about a half-million Americans a year.

How Scared Should We Be of the Potentially Deadly Bacteria C. Diff?

We hear about stuff that can kill us all the time, of course, and it's hard to tell how worried we should be about individual maladies—remember Ebola? With so much health-related white noise in the news, how concerned should we be about C. Diff?

One important difference is that hands must be washed with soap and water—not an alcohol hand sanitizer—as alcohol is ineffective in killing the spores. So for Hand Hygiene Day, remember to wash your hands.

The Enema of Your Enemy is Your Friend

Here’s the basic idea. People suffering from the hardy C. diff bacteria are generally prescribed a powerful antibiotic. Problem is, the drugs don’t just kill the invaders; they also wipe out much of the beneficial bacteria in the gut. With these “good” microorganisms out of the way, any C. diff stragglers have a much easier time regrouping for a second bout of illness. If there were some way to respawn the beneficial bacteria in the intestines, such re-infections could be warded off.

The Trigger That Turns C. difficile Into A Killer

By determining the mechanism behind toxin production, we now have a better understanding of how the bacterium turns from harmless microbe to killer infection.

When Feces Is the Best Medicine

Fecal transplants have been proven to successfully treat certain types of infection, but proponents of the treatment are still fighting what they say are unnecessarily strict regulations.

But poop is no panacea either. Scientists have treating all kinds of disorders with fecal transplants with mixed results, while a burgeoning community of DIY enthusiasts have tried the treatment without due awareness of its many risks.

Why Would Anyone Get a Fecal Transplant?

It isn’t very often that a medical procedure inspires a patient-advocacy movement, let alone an Internet fan club. Especially not a procedure that is, well, icky. But that’s undeniably what has happened with fecal transplants, a low-tech practice from back in medical history that has worked its way from outlaw home procedure to papers in major medical journals and a Food and Drug Administration clinical trial.

Why you should never, ever touch that hospital elevator button

It's no secret that hospitals are dirty places. Hospital-acquired infections, like C. difficile, are major killers, and everyday objects on the wards—from white coats to ultrasound equipment—are well-known harborers of bacteria. Now, a new study in the journal Open Medicine has revealed a little-known germ hotspot: the hospital elevator button.

Trouble in the Gut, When Antibiotics Work Too Well

Furthermore, studies indicate that C. difficile, so named in the 1930's because it was difficult to isolate and grow in the laboratory, has become more virulent in recent years, perhaps because potent antibiotics killed off less noxious variants of the organism. Superstrains of the organism produce about 20 times as many colon-damaging toxins as typical strains.

An Unusual Cause of Chronic Diarrhea

Syphilis is an important treatable diagnosis to consider in patients with multiple organ symptoms who are suspected to have inflammatory bowel disease or chronic biliary tract disease, particularly in high-risk patients when the clinical and pathologic findings are not entirely typical for those diagnoses.

Dangerous Infection Tied To Hospitals Now Becoming Common Outside Them

Staining deep violet under the microscope, they appear as slender rods with a bulge at one end, like a tadpole or maple seed. They thrive in soil, marine sediments and humans. They live on our skin and in our intestines. And sometimes, they can kill you. Most strains are harmless, but tetanus, botulism and gangrene are caused by clostridial species. Vaccination, sanitation and improved medical care have made these infections less common, but one variety has been difficult to contain. Clostridium difficile, or C. diff, can cause diarrhea and a life-threatening infection of the intestines.

The Fecal Transplant Foundation was created to raise awareness of this life saving treatment, to help patients and physicians, and to accomplish the many goals in our Mission Statement. The purpose of fecal transplant is to replace good bacteria that has been killed or suppressed, usually by the use of antibiotics, causing bad bacteria, specifically Clostridium difficile, or C. diff., to over-populate the colon.

Motivated by scientific curiosity and frustration at the struggle of a friend suffering from recurrent C. difficile, we founded the OpenBiome project to give a broader pool of clinicians access to the carefully screened samples necessary to perform FMT. Despite the underlying simplicity and efficacy of FMT, it has become difficult to practice at the scale required due to the challenges of screening donors and processing stool material. OpenBiome is designed to simplify the FMT process by freeing clinicians to focus on providing care and conducting research rather than preparing stool and filing paperwork.

People getting medical care can catch serious infections called healthcare-associated infections (HAIs). While most types of HAIs are declining, one — caused by the germ C. difficile — remains at historically high levels.

You might get C. difficile disease if you have an illness that requires prolonged use of antibiotics. Increasingly, the disease can also be spread in the hospital. The elderly are also at risk.

Infection with Clostridium difficile most commonly occurs in people who have recently had a course of antibiotics and are in hospital. Symptoms can range from mild diarrhoea to a life-threatening inflammation of the bowel. No treatment may be needed in mild cases except drinking plenty of fluids. However, treatment with specific antibiotics is needed in more severe cases.