Where in health am I? : Home / Health Cloud / Challenges / Infections / Epidemics / Outbreaks

The critical lesson is not to wait until a crisis spins out of control. Act rapidly, decisively and with leadership - Lawrence Gostin 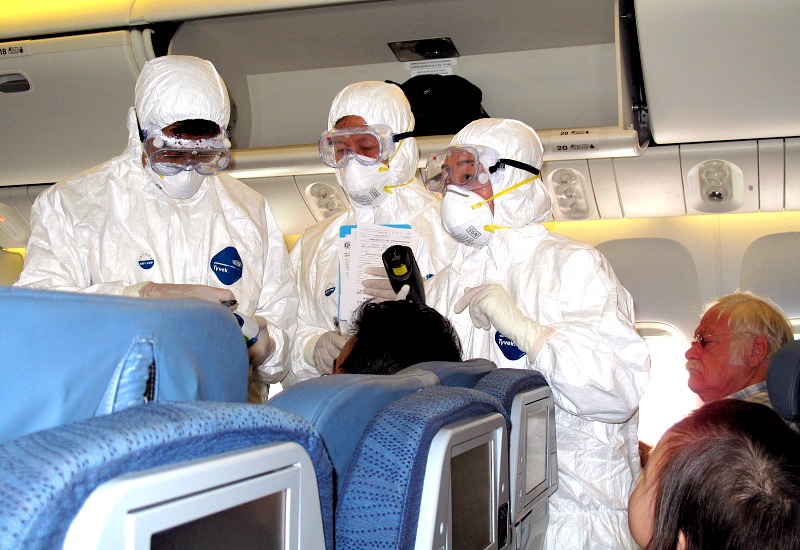 The sheer number of people, their interactions with animals and ecosystems, and the increase in international trade and travel are all factors that will likely change the way humanity deals with preventing and treating epidemics, experts say. In fact, the unprecedented growth of the human population in the second half of the last century — growing from 2.5 billion to 6 billion — may have already started changing how infectious diseases emerge.

"There's a strong correlation between the risk of pandemic and human population density. We've done the math and we've proved it," said Dr. Peter Daszak, a disease ecologist and the president of Eco Health Alliance, who examined the link in…

The word epidemic comes from the Latin term “epi demos,” meaning “upon people.” Just having an infectious pathogen is not enough to cause an epidemic. In public health, we talk about three key parts of an “epidemiologic triangle” that must come together to cause an epidemic: 1) a pathogen (usually virus or bacteria); 2) a host (human or animal) that is susceptible to that pathogen; and 3) an environment that brings the pathogen and host together in a way that fosters spread. Understanding the epidemiological triangle is key to understanding why an outbreak occurs, and how to change parts of the triangle to stop the outbreak.

New illnesses are poised to emerge as the climate changes.

Since the outbreak that gave Legionnaires’ disease its name nearly four decades ago, water-cooling towers have been identified as prime breeding grounds for the deadly disease.

The Danish researchers, who published their study last month, are hardly the only scientists who see valuable health data being flushed down the toilet.

An Outbreak of Conspiracy Theories

Why do emerging diseases like Zika tend to breed tall tales of sinister plots?

Major foodborne outbreaks in the United States have more than tripled in the last 20 years, and the germs most frequently implicated are familiar to most Americans: Salmonella, E. coli, and Listeria.

Infectious disease outbreaks currently being reported on by CDC.

During a multistate foodborne disease outbreak, CDC serves as lead coordinator between public health partners to detect the outbreak, define its size and extent, and to identify the source.

Displays outbreaks, cases and deaths from viral and bacterial diseases which have the potential to indicate global terrorism

Lessons from the NFL's MRSA Outbreak

The CDC lays the blame squarely on the overuse of antibiotics, and issues what it calls four core actions that must be taken.

Outbreaks of Foodborne Illnesses Are Becoming Harder to Detect

Preparing the WHO for the Next Outbreak

The Most Dangerous Epidemics in U.S. History

Disease outbreaks are fairly rare and, when they do happen, are often overstated. In recent years, there has been plenty of handwringing and worrying over bird flu, swine flu, and other diseases. However, the fame of swine flu may be due more to the need to fill the 24-hour news cycle than anything else. Nevertheless, there have been some serious disease outbreaks in U.S. history.

There are few things that are less fun than food poisoning. There you are, going about your business, when suddenly you’re nothing short of immobilized, all because you ate the wrong thing. We’ve rounded up the ten worst food poisoning outbreaks in recent history.

In a paper published in 2014 in Science, our research teams documented and deconstructed the failure of Google to predict flu prevalence.

Why Did Vaccinated People Get Measles at Disneyland?

The misery of a measles outbreak at the Happiest Place on Earth is an irony even the most jaded epidemiologist could do without, but the 52 cases that originated in Disneyland in December hide within them an even scarier number—scary, that is, unless you understand how vaccines work.

The explosive growth of the human population—from 2.5 billion to 6 billion since the second half of the 20th century—may have already started changing how infectious diseases emerge.

4 reasons disease outbreaks are erupting around the world

Many of the pathogens that spark deadly outbreaks aren't new. Researchers have known about Zika since the 1940s and Ebola since the 1970s. Some of these viruses have evolved with humans for hundreds or thousands of years. But viruses, bacteria, and fungi can now spread around the world with greater effectiveness and speed than ever before. And when they turn up unexpectedly in new places, they catch doctors and health systems — and people's immune systems — off guard. Here are four key reasons we're seeing an uptick in infectious diseases around the world...

Extensive worldwide resource from the WHO