Where in health am I? : Home / Health Cloud / Challenges / Infections / Eye / Blepharitis

Despite its prevalence, blepharitis is still often overlooked, misdiagnosed, and therefore suboptimally treated, which is why it is so important for practitioners to be cognizant of the condition - Warren J. Whitley, OD & Walter O. Whitley OD 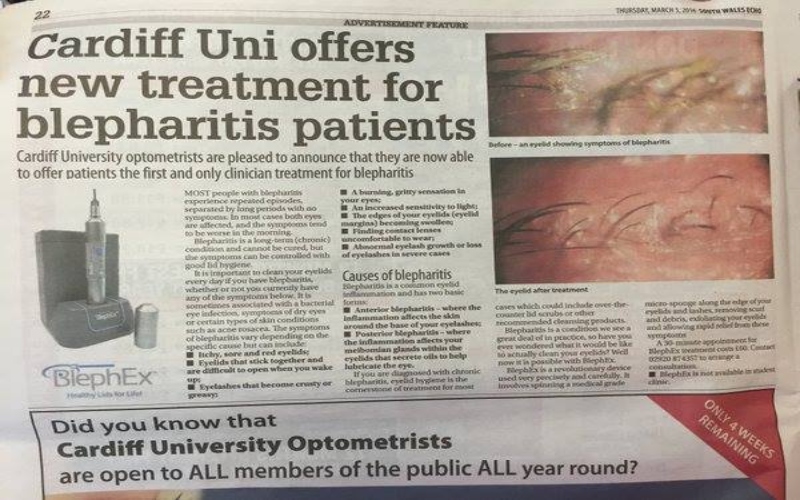 Treatments for Blepharitis and Dry Eye – Ending the Vicious Cycle

As if having dry, scratchy eyes wasn’t enough, it is often accompanied by a condition called blepharitis, a chronic, inflammatory disease of the eyelids in which bacteria overgrow and colonize along the inner lids and eyelashes. Blepharitis can come with one or more symptoms, including eye dryness, dandruff-like flakes on the lashes or lash-line, red, swollen upper and/or lower eyelids, tearing, itching, scratchiness, foreign body sensation and a greater tendency to develop sties (painful, bumpy eyelid infections) and chalazia (blocked, swollen eyelid glands).

“People can get blepharitis at any age,” says Doctor of Optometry Adria Anguita, “but it becomes more common as people age,…

Blepharitis and Dry Eye: A Common, Yet Complicated Combination

The diseases often co-present, which may confound treatment priorities.

Do I have pink eye?” How many times have ODs heard that question from their patients? The answer is usually, “Yes, you do have a pink eye and that’s why you came to see us today.” The pink eye question gives me an opportunity to explain to the patient that not all eyes become “pink” for the same reason. I tick off the extensive list of differentials of conjunctivitis.

Diagnosis and management of blepharitis: an optometrist’s perspective

Blepharitis is a condition characterized by inflammation of the eyelid margin and is a common cause of discomfort and irritation among people of all ages, ethnicity, and sex. In general, blepharitis is not a sight-threatening condition, but if left untreated has the potential to cause keratopathy, corneal neovascularization and ulceration, and permanent alterations in eyelid morphology.

Blepharitis diagnosis and treatment begins with correctly identifying the underlying cause and addressing it appropriately. “It’s a clinical diagnosis...

Dry eye disease also turns out to have far more possible causes — and, as a result, various specific treatments — than was once thought. As the above description suggests, it is not just a matter of insufficient tears from the lacrimal glands. Possible causes include defects in the parts of the eye that produce each of the layers in tears; an inflammatory disease like allergy or chronic blepharitis (an inflammation of the eyelids)...

Blepharitis, an inflammatory condition associated with itchiness, redness, flaking, and crusting of the eyelids, is a common eye condition that affects both children and adults. It is common in all ethnic groups and across all ages. Although infrequent, blepharitis can lead to permanent alterations to the eyelid margin or vision loss from superficial keratopathy (abnormality of the cornea), corneal neovascularization, and ulceration.

Blepharitis is a common, often chronic, and recurrent ocular disease characterized by inflammation of the eyelid margin. The most common parasitic infection causing blepharitis is due to Demodex folliculorum.

Treatments for Blepharitis and Dry Eye – Ending the Vicious Cycle

As if having dry, scratchy eyes wasn’t enough, it is often accompanied by a condition called blepharitis, a chronic, inflammatory disease of the eyelids in which bacteria overgrow and colonize along the inner lids and eyelashes.

Blepharitis treatment varies depending on the cause, duration, and other systemic medical problems a person may have. The mainstay of blepharitis treatment is to apply warm compresses several times a day followed by eyelid scrubs once or twice per day.

Anterior blepharitis is an inflammation of the eyelid margin anterior to the gray line and concentrated around the lashes.2 The condition is typically associated with gram-positive bacteria, most commonly staphylococcal infections (Staphylococcus aureus and Staphylococcus epidermis). Other causes include dry eye disease, Demodex mite infestations, rosacea, seborrheic dermatitis, isotretinoin, and giant papillary conjunctivitis.

Avenova is lab tested and clinically proven to be the most effective lid & lash solution available without a prescription. It kills a broad spectrum of bacteria and successfully helps relieve chronic eye conditions like Dry Eye, Blepharitis, Meibomian Gland Dysfunction, Contact Lens Intolerance and Inflammation.

Blephadex™ is a leader in the next generation of daily eyelid care. It’s an all-natural, eyelid, eyelash and facial cleaner that helps to relieve the symptoms of dry, itchy eyes, Blepharitis, Rosacea, and Demodex Mites without the burning and stinging of other brands. Simple, pure relief from all-natural ingredients – what could be better?

BlephEx™ is a new device that allows eye doctors to treat Blepharitis which is an exceedingly common condition of the eyelids among the young, especially contact lens wearers, and the middle aged and elderly

Ruling out allergies, there are many lid margin diseases like dry eye, meibomian gland dysfunction, ocular rosacea, stye, and chalazion. The most common is Blepharitis (eyelid inflammation) caused by bacteria and Demodex mites, probably the most undiagnosed cause of Blepharitis. Demodex infestation is very common, present in 84% of the population at age 60, and 100% in patients older than 70 1.

The best way to treat blepharitis is to keep your eyelids clean and free of crusts. Use water and a gentle cleanser (like baby shampoo) to clean your eyelids and remove crusts every day.

Blepharitis is usually a chronic condition, which means it can come back often. The best way to prevent blepharitis or keep it from coming back is to clean your eyelids daily to stop the buildup of bacteria, biofilm and mites on the eyelid.

Complications from blepharitis include: Stye (hordeolum) – a red tender lump caused by an infection of an oil gland of the eyelid. Chalazion – a painless firm lump caused by inflammation of the oil gland of the eyelid. Chalazion can be painful and red if it becomes infected. Abnormal or decreased oil secretion resulting in excess tearing or eye dryness. Corneal infections due to abnormal or decreased oil secretion.