Where in health am I? : Home / Health Cloud / Challenges / Infections / Healthcare-Associated Infections

A Hospital is no place to be sick - Samuel Goldwyn 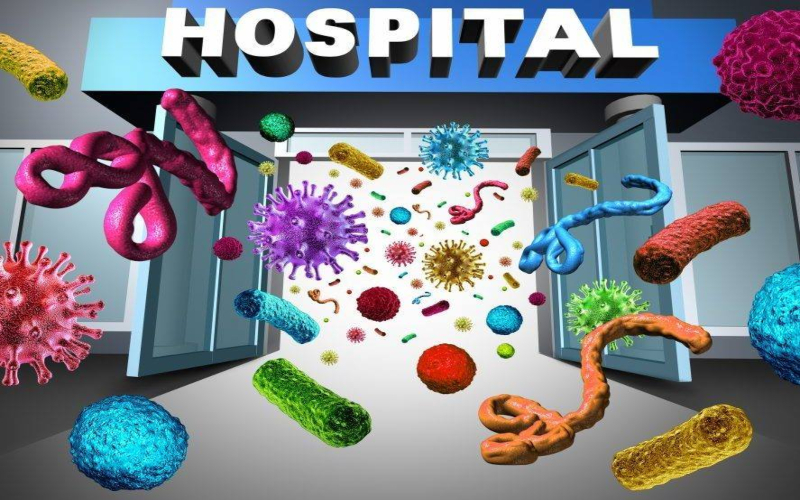 Hospital-Acquired Infections: Beating Back the Bugs

It is the ultimate paradox of American health care: going to the hospital can kill you. Every year nearly two million hospital-acquired infections claim roughly 100,000 lives and add $45 billion in costs; that is as many lives and dollars as taken by AIDS, breast cancer and auto accidents combined. And with antibiotic resistance rising steadily, those numbers promise to climb even higher.

Even more staggering than the numbers is that most of these infections are preventable. The Institute of Medicine has long since determined that if hospital staff would make some minor adjustments to their routines—like washing their hands more—the problem could be significantly minimized.

Culture of Secrecy Shields Hospitals With Outbreaks of Drug-Resistant Infections

In January, the Centers for Disease Control and Prevention sent out an urgent public alert about a deadly bacteria, resistant to virtually every known antibiotic, that sickened more than a dozen Americans who had elective surgery at Grand View Hospital in Tijuana, Mexico. But when similar outbreaks take place at hospitals on American soil, the C.D.C. makes no such public announcement. That is because under its agreement with states, the C.D.C. is barred from publicly identifying hospitals that are battling to contain the spread of dangerous pathogens. The rise of a deadly drug-resistant fungus called Candida auris, a focus of a New York Times report last weekend, has raised fresh questions about the secrecy enveloping infectious outbreaks at American medical institutions.

Hospitals Step Up the War on Superbugs

If Your Smartphone Is Covered With Germs, So Is Your Doctor’s

While practicing pediatric oncology at a major teaching hospital, Taylor wondered why so many of her young patients came down with infections and the flu, despite the hospital’s herculean efforts at prevention. Her hunch: the design and infrastructure of the building contributed somehow.

Why Are These Medical Instruments So Tough to Sterilize?

Duodenoscopes have sickened hundreds of patients in hospital outbreaks. Now some experts are demanding the devices be redesigned or taken off the market.

There’s an infection hospitals can nearly always prevent. Why don’t they?

How Hospitals Are Becoming Safer for Children

Rates of physician-induced infections have plummeted in recent years, new research says. But there is still little incentive to prevent them before they happen.

Battling germs that keep getting stronger

Every year, 250,000 Canadians pick up infections while they are in hospitals being treated for something else.

Fewer People Are Getting Infections In Hospitals, But Many Still Die

Hospital-acquired infections continue to be a big problem in health care, with 4 percent of patients getting a new infection while hospitalized, a study finds. And 11 percent of those infections turn deadly.

When the temperature goes up, so do the numbers of healthcare infections.

An error or an infection in a hospital, clinic, operating room or nursing home is a lot more likely to harm or kill you than a terrorist attack, a nuclear war, an invasion or many of the things...

In 2002, one in every 20 hospitalized patients developed a healthcare-associated infection (HAI), making HAIs one of the leading causes of death and illness in the U.S., and costing up to $33 billion dollars, according to the Department of Health and Human Services (HHS).

Hospital Acquired Infections: A Costly, Lethal Scourge That We Must Labor to Wash Our Hands Of

If you're admitted to a hospital, the last thing you should need to worry about is developing an infection linked to your care. Sadly, it occurs too often.

There were reductions in urinary and surgical infections, but not in pneumonia or C. diff infections.

After the needless death of his father, the author, a business executive, began a personal exploration of a health-care industry that for years has delivered poor service and irregular quality at astonishingly high cost. It is a system, he argues, that is not worth preserving in anything like its current form. And the health-care reform now being contemplated will not fix it. Here’s a radical solution to an agonizing problem.

Medical mistakes happen. Medical professionals are only humans who can err. One gets to wonder how many medical misadventures go unreported!

A high-profile Medicare policy that sought to reduce certain hospital-acquired infections by cutting payments tied to treating them turned out to have no impact, according to a new study in the New England Journal of Medicine

A 6-foot—tall rolling robot that emits UV light may help reduce colonization of hospital surfaces by such problematic pathogens as Clostridium difficile, Acinetobacter, and vancomycin-resistant enterococci (VRE), according to research findings presented at IDWeek 2012, a scientific meeting held by the Infectious Diseases Society of America, the Society for Healthcare Epidemiology, the HIV Medicine Association, and the Pediatric Infectious Diseases Society.

Bacterial infections aren’t sexy: no one walks, bikes, hops, pogo sticks for the cure. There are no ribbons, no bumper stickers, and no hot celebrities (damn!). Yet, according to the CDC, bacterial infections acquired in hospitals kill at least 90,000 people per year in the U.S. Granted some of those who died would have died from something else anyway, but that’s still a really large number. To put this figure in context, in 2004, roughly 18,000 people died from HIV. 40,000 died from breast cancer.

We Have No Idea How Many People Die From Superbug Infections

Thanks to lax hospital standards.

Hospital-Acquired Infections: Beating Back the Bugs

It is the ultimate paradox of American health care: going to the hospital can kill you. Every year nearly two million hospital-acquired infections claim roughly 100,000 lives and add $45 billion in costs; that is as many lives and dollars as taken by AIDS, breast cancer and auto accidents combined. And with antibiotic resistance rising steadily, those numbers promise to climb even higher.

1 in 10 patients are infected in hospital, and it’s not always with what you think

In the first study of its kind in Australia for over 30 years, we also uncovered unexpected infections, like pneumonia and urinary tract infections, as well as high numbers of patients with multi-drug resistant organisms (superbugs).

Protect Yourself With Rid's 15 Steps for Patients and 10 Steps for Students. When RID began in 2004, hospital infection rates were kept secret and government agencies did far too little to address the problem. Since then, twenty-six states and The District of Columbia have enacted laws requiring hospitals to disclose their infection rates to the public.

We are entering one of the most active, interesting and challenging times in the history of infection prevention and control.

CHICA-Canada is a national, multi-disciplinary, voluntary association of Infection Control Professionals (ICPs) dedicated to the health of Canadians by promoting excellence in the practice of infection prevention and control.

Modern healthcare employs many types of invasive devices and procedures to treat patients and to help them recover. Infections can be associated with the devices used in medical procedures, such as catheters or ventilators. These healthcare-associated infections (HAIs) include central line-associated bloodstream infections, catheter-associated urinary tract infections, and ventilator-associated pneumonia. Infections may also occur at surgery sites, known as surgical site infections. CDC works to monitor and prevent these infections because they are an important threat to patient safety.

HAIs are a significant source of complications across the continuum of care and can be transmitted between different health care facilities. However, recent studies suggest that implementing existing prevention practices can lead to up to a 70 percent reduction in certain HAIs

PSAN is a coalition of individuals and organizations consisting of patients who have been medically harmed, their loved ones, and concerned advocates. With a unified voice we focus solely on and with patients to raise awareness and to create accountability, transparency and safer healthcare.