Where in health am I? : Home / Health Cloud / Challenges / Infections / Measles (Rubeola)

Measles may not spread as fast as erroneous sound bites and tweets, but they both have the potential to cause a great amount of damage - Bill Foster 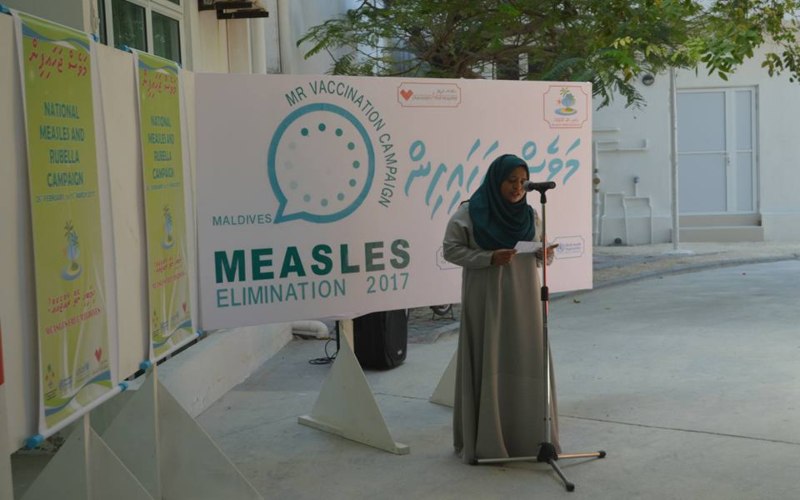 Since the Measles & Rubella Initiative (M&RI) launched in 2001, impressive gains have been made towards controlling measles outbreaks and eliminating the disease, thanks to the hard work of ministries of health, healthcare workers around the world and our many partners. Measles deaths have dropped 75% from an estimated 544,200 deaths in 2000 to an estimated 145,700 deaths in 2013...

We urge parents and community leaders around the world to ensure that their children are fully immunized against measles with two doses of measles-containing vaccine. Education on the benefits of immunization is of the utmost importance, as evidenced by the detrimental effects of large-scale outbreaks…

Koplik’s Spots: Viral enanthem of measles typically starting 1-2 days before the rash. Appearance is similar to “grains of salt on a wet background” and may become less visible as the maculopapular rash develops.

Measles symptoms appear 7 to 14 days after contact with the virus and typically include high fever, cough, runny nose, and watery eyes. Measles rash appears 3 to 5 days after the first symptoms.

The symptoms of measles generally begin between 7 and 14 days after the person was infected and start with 3-5 days of high fevers, cough, runny nose, and red, watery eyes followed by a rash. The rash consists of small red bumps on top of flat red spots that begin on the head and face near the hairline and move downward toward the feet to cover the body.

Measles: Why it’s so deadly, and why vaccination is so vital

Since the measles virus is so infectious and Europe, Africa, South America, and South East Asia are not really that far away by jumbo jet, a case somewhere in the world can lead to an infection anywhere in the world. Failure to vaccinate large groups of people is helping measles come back. From California, to New York from Washington state to Minnesota and Georgia, measles is back with a vengeance. Now we can only live in hope that the last death from this deadly disease in the U.S. remains from 2015. Unfortunately, that is not a given.

What is the difference between measles and rubella?

Measles.. Small white spots in the mouth (called Koplik spots) within 2-3 days. Then a rash, red spots spread to the body after 3-5 days. Rubella... ink rash that begins in the face and moves to the body, lasts 3-5 days.

The anti-vaccine movement is wrong to dismiss the disease’s dangers (as it is wrong about so many things).

Look at what made the World Health Organization's (WHO's) just-released list of "10 threats to global health in 2019." Right alongside the Ebola virus, HIV, antibiotic-resistant bacteria, pollution, and non-communicable diseases such as obesity, diabetes, and heart disease is "vaccine hesitancy." That's right, one of the biggest threats is not a disease, not the lack of a prevention measure or a treatment, and not the lack of resources.

Perhaps the Disneyland epidemic, which has now spread to 14 states, will finally convince parents, schools, and state legislatures that they need to insist that children get vaccinated before going to school. Perhaps it will also convince parents to stop listening to nonsense, and choose wisely by getting their children vaccinated against measles. We won this battle before, and we can win it again.

Children Are Dying From Measles At An Alarming Rate: Report

The Measles & Rubella Initiative has warned that the only way to get back on track to eliminating the virus is by raising awareness about the disease’s effects, increasing funding and supporting vaccine campaigns.

Even though measles was eliminated from the United States in 2000, outbreaks can occur when unvaccinated travelers pick up the measles abroad, importing the virus as an unwelcome, and often unknown, souvenir

Mankind almost beat measles, but the virus is storming back in Europe

So why the high rates? Officials in Europe and America are pointing, in part, to the populations of parents who are actively choosing to not vaccinate their children.

A study published Tuesday in the Journal of the American Medical Association has found no link between the measles-mumps-rubella (MMR) vaccine and autism, even in children considered to have an elevated risk of developing the disorder.

Measles was eliminated from the United States in 2000, meaning that the infection no longer originates here. But worldwide, there are still about 20 million cases a year; in 2013, about 145,700 people died of measles. Travelers can bring the virus into the United States and transmit it to people who have not been vaccinated.

Measles: should vaccinations be compulsory?

With measles rising across America and Europe, should governments go further and make vaccination compulsory? Most would argue that this is a terrible infringement of human rights, but there are precedents.

Ready or Not: Responding to Measles in the Postelimination Era

As measles incidence increases, clinicians have a vital role to play. We need to talk to our patients about measles vaccination and remind them what is at stake if imported measles cases continue to land in communities of unvaccinated persons, especially for those who are too young or ineligible to be vaccinated.

Separating Fact from Fiction: The Truth about Measles, Vaccines and How It All Affects You

Anyone who received the measles vaccine prior to 1968 should be immunized again, as vaccines during that period could not fully protect an individual.

The Struggle to Fight Measles in Close-Knit Communities

Research on how to change the minds of vaccine-resistant parents is ongoing, but experts say with such diverse populations there isn’t a one-size-fits-all approach.

This Mama Isn’t Scared of the Shmeasle Measles

I’m not vaccinating my children. No way. No how. Not ever. This mama isn’t scared of the shmeasle measles.

Traveling Abroad? Born Before 1989? You May Need a New Measles Vaccination.

The wildly contagious virus is still alive and well in Europe, Africa, and Asia—if you’re going there, you might need better protection.

These outbreaks are largely caused by a drop in vaccination rates in some communities, and the World Health Organization recently declared the antivaccination movement as one of the top 10 global health threats in 2019.

Why measles is back in the US

Measles is back in the United States. This completely preventable disease was eradicated in 2000 but has made a comeback in the past decade. More people have gotten measles in the first three months of 2019 than in all of 2018. But the outbreaks aren’t occurring all over the US — they’re happening within specific groups of people.

Why Mumps And Measles Can Spread Even When We're Vaccinated

Measles is a terrific vaccine. If you get two doses, it's predicted to protect 99.99 percent of people for life... The mumps vaccine, on the other hand, is not so good. The protection rate varies from study to study. But it's usually in the mid-80s.

The virus is still out there, beyond our borders, and unvaccinated people travel beyond those imaginary lines that pathogens don’t seem to honor and bring them home. Clearly, the real barrier between the US and measles is our domestic vaccine program. If measles breaks out in your actual community, don’t actually call him. Just get yourself and your children vaccinated if you haven’t already.

Since the Measles & Rubella Initiative (M&RI) launched in 2001, impressive gains have been made towards controlling measles outbreaks and eliminating the disease, thanks to the hard work of ministries of health, healthcare workers around the world and our many partners.

9 things everybody should know about measles

There’s one fact that makes the measles virus really scary: it’s one of the most infectious diseases known to man. A person with measles can cough in a room, leave, and — if you are unvaccinated — hours later, you could catch the virus from the droplets in the air that they left behind. No other virus can do that.

Measles is one of the most contagious illnesses known to man.

The Measles & Rubella Initiative is committed to ensuring that no child dies from measles or is born with congenital rubella syndrome. We help countries to plan, fund and measure efforts to stop measles and rubella for good.

Measles is a highly contagious virus that can lead to complications. Learn about its history, answers to common questions, and, if you’re a parent, how you can protect your child.

There are two "forms" of measles: rubeola (the "ordinary" kind), which causes more serious symptoms and can do permanent damage, and rubella ("German" measles), which is very benign if you have it as a child or an adult but can induce severe birth defects in womem infected early in pregnancy. Aside from some similarity in symptoms, there isn't much in common betwen the two viruses.

While measles is probably best known for its full-body rash, the first symptoms of the infection are usually a hacking cough, runny nose, high fever, and red eyes. A characteristic marker of measles are Koplik's spots, small red spots with blue-white centers that appear inside the mouth.

Also called rubeola, measles can be serious and even fatal for small children. While death rates have been falling worldwide as more children receive the measles vaccine, the disease still kills more than 100,000 people a year, most under the age of 5.

People who have been appropriately vaccinated (or who have had the disease) and who are exposed to a patient with measles do not need to do anything. If an unimmunized person is exposed to a patient with measles, they should receive the vaccine as soon as possible. This may prevent the disease if given within 72 hours of exposure. Immune globulin may have some benefit if given within six days of exposure.

Measles is a highly infectious respiratory disease that can result in severe, sometimes permanent, complications including pneumonia, seizures (jerking and staring), brain damage, and death. It it highly contagious and spreads easily by contact with an infected person through coughing and sneezing. In fact, if a person has measles, 9 out of 10 of his close contacts will get it too, unless they are protected.

Measles is a highly contagious, serious disease caused by a virus. In 1980, before widespread vaccination, measles caused an estimated 2.6 million deaths each year. The disease remains one of the leading causes of death among young children globally, despite the availability of a safe and effective vaccine. Approximately 145 700 people died from measles in 2013 – mostly children under the age of 5. Measles is caused by a virus in the paramyxovirus family and it is normally passed through direct contact and through the air.