Twas not my lips you kissed but my soul - Judy Garland 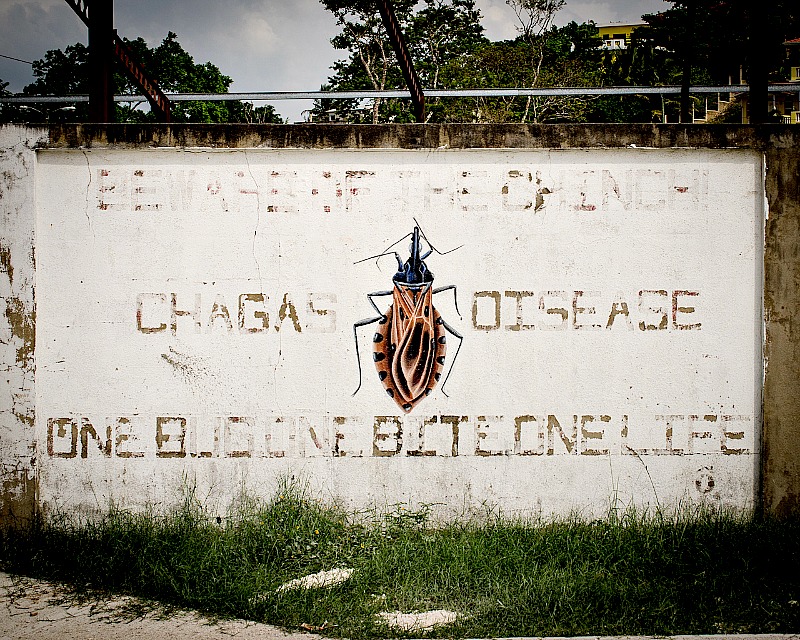 Global health topics are typically presented in the context of extreme poverty in sub-Saharan Africa or Asia. However, today approximately 100 million people in the Western Hemisphere also live on less than $2 per day. About 10 percent of these "bottom 100 million" currently live with a serious and life-threatening neglected disease known as Chagas disease or American trypanosomiasis.

Humans acquire Chagas disease microscopic parasites -- trypanosomes -- through contact with kissing bugs that thrive in poor quality and substandard housing. Trypanosomes selectively attack the heart so that up to one-third of people who acquire them progress…

In the dark of night, a hunt for a deadly bug in the name of science

In Latin America, Chagas is a public health crisis: millions have the disease, and only 1 percent of them get adequate treatment. In the United States, the illness is rare, and transmission even more so: Most of the estimated 300,000 people who are infected caught the parasite from a kissing bug in Latin America.

The disease that lurks for decades

Chagas disease causes misery in poor communities around the world, and may lead to 10,000 deaths a year. Health workers are trying new methods to ease suffering.

Kissing Bugs: How You Can Get Heart Disease From A Bite

Want to know how this %&$% bug can get the parasite into your body? The name kissing bug comes from the bug's tendency to bite you near your mouth or your eyes. (By the way, don't kiss people on the eyes). The bug can bite you, suck your blood, and then poop into or close to the wound. That's right. This bug poops on your face. And that poop may carry the T. cruzi parasite. Call me old fashioned, but any "kiss" that ends up with being pooped on the face is not good.

Unless you are from Texas or Latin America, you may never have heard of the deadly Triatomine insect, known as the “kissing” bug, which transmits Chagas disease. The bug visits people while they sleep, often crawling on their face. The bug can infect through bites. More often, the bug’s infected poop is accidentally rubbed into your eyes or mouth, causing infection.

A deadly illness from abroad has made its way to the U.S. – but it’s not Ebola. Several cases of “kissing bug” disease, known formally as Chagas disease, have recently been identified...

A little-known disease called Chagas is much more prevalent than Zika. Here’s how advocates fought an uphill battle, and won.

Bed Bugs And Chagas Disease: Don’t Worry Quite Yet

Still, there is no evidence that bed bugs can transmit T. cruzi to people and it's too early to guess whether it's possible.

Nobody likes bed bugs, but one thing we could always say was “at least they don’t transmit any human diseases!” That’s still true, although some research published this week is causing some concern.

Chagas disease, caused by the protozoan parasite Trypanosoma cruzi, continues to make inroads in the United States and physicians are both unprepared to diagnose and under equipped to treat cases of the disease in their patients.

Chagas Disease, Tropical Insect-Borne Illness, May Be 'New HIV/AIDS Of The Americas'

Although the NIH states that it can "take more than 20 years from the original time of infection to develop heart or digestive problems," the onset of symptoms can be catastrophic. According to The New York Times, one quarter of people that contract Chagas disease eventually develop enlarged organs that can potentially burst, causing sudden death.

Chagas disease: A silent kiss and a neglected killer

What is so remarkable about this silent killer is the deep neglect that surrounds it. Chagas is endemic to all countries in Latin America and increased migration and population movement means there are now cases throughout the world, including approximately 300,000 in the United States.

The Food and Drug Administration recently approved the first U.S. treatment for childhood cases of Chagas disease — a parasite-driven illness that, over time and unless treated early, can cause serious heart problems in about a third of the people it infects. On Aug. 29 the FDA gave the global drug company Chemo Group approval to market its drug benznidazole in the U.S. The approval came via a fast-track process the agency says it uses for drugs that can be used to treat "serious conditions where there is unmet medical need."

Explainer: what is Chagas disease?

Chagas is a parasitic infection that is endemic in 21 countries in Central and South America and affects an estimated 6-7 million people worldwide. This disease is one of several so-called neglected tropical infectious diseases that have significant worldwide morbidity (the incidence of a disease) and mortality.

Triatomine insects (Hemiptera: Reduviidae), commonly known as kissing bugs, are a potential health problem in the southwestern United States as possible vectors of Trypanosoma cruzi, the causative agent of Chagas disease. Although this disease has been traditionally restricted to Latin America, a small number of vector-transmitted autochthonous US cases have been reported.

In real life, the kissing bug does suck blood. But that's not the problem. The bug swells so much from feeding that it defecates, leaving the parasite Trypanosoma cruzi in the victim's bloodstream. The result is Chagas, or kissing bug, disease.

Chagas, a disease common in Latin America, is gaining traction among immigrants in the U.S.

Chagas costs the world about $7 billion annually, says the analysis just published in the The Lancet Infectious Diseases. That's more than the global cost of cervical cancer or cholera.

Stubborn Infection, Spread by Insects, Is Called ‘The New AIDS of the Americas’

Chagas is also known as American trypanosomiasis, because the bugs carry single-celled parasites called trypanosomes. (Their best-known relative, spread by tsetse flies in Africa, causes sleeping sickness.) Like AIDS, the authors say, Chagas disease has a long incubation time and is hard or impossible to cure. Chagas infects up to eight million people in the hemisphere, mostly in Bolivia, Mexico, Colombia and Central America.

In poorest countries of Latin America, such as Bolivia, Honduras, and Nicaragua, Chagas disease is the leading cause of heart disease. But it is also very common yet mostly hidden within pockets of extreme poverty in wealthier nations such as Argentina, Brazil, Colombia, Mexico, and even the United States, as well as among Latin American immigrants to Europe, Asia, and Australia.

As researchers, clinicians, patients, funders, civil society, and public health practitioners engaged in research and development (R&D) and implementation of treatment and prevention programs, we have decided to join forces to create a coalition aimed at changing the future of Chagas disease.

The Chagas Time to Treat Campaign

The Chagas: Time to Treat Campaign was an international campaign launched by the Drugs for Neglected Diseases initiative (DNDi) on July 9 2009, the centennial of the discovery of Chagas disease, to advocate for access to existing treatments and increased research and development (R&D) of new, more effective and safer treatments for Chagas disease.

Chagas disease is named after the Brazilian physician Carlos Chagas, who discovered the disease in 1909. It is caused by the parasite Trypanosoma cruzi, which is transmitted to animals and people by insect vectors and is found only in the Americas (mainly, in rural areas of Latin America where poverty is widespread). Chagas disease (T. cruzi infection) is also referred to as American trypanosomiasis. In the United States, Chagas disease is considered one of the neglected parasitic infections (NPI), a group of five parasitic diseases that have been targeted by CDC for public health action.

Chagas is not as well known as diseases such as malaria or cholera yet it affects between six and seven million people and kills up to 12,500 each year.

Also called American trypanosomiasis, Chagas disease can infect anyone, but is diagnosed most often in children. Left untreated, Chagas disease later can cause serious heart and digestive problems. Treatment of Chagas disease focuses on killing the parasite in acute infection and managing signs and symptoms in later stages.

Unfortunately, if Chagas disease is not diagnosed and treated in the early phase, those infections that progress to chronic phase are then are diagnosed in this later stage when they are not easily treated because the damage to the body organs is usually irreversible.

No, Kissing Bugs Are Not a New Scourge

If social media is any indication, many people are suddenly very concerned about dying from the bite of “kissing bugs.” Don’t be. The bugs are not any more likely to kill you than they have been for the last couple of centuries.

American Trypanosomiasis, also known as Chagas disease, is a potentially life-threatening zoonotic illness caused by the parasite Trypanosoma cruzi. The disease is most commonly seen in Central and South America, Trinidad, and the southern United States. However, it is less common outside of rural areas where vectors are commonly found in rustic housing.

Chagas disease, also known as American trypanosomiasis, is a potentially life-threatening illness caused by the protozoan parasite Trypanosoma cruzi (T. cruzi). It is found mainly in endemic areas of 21 Latin American countries1, where it is mostly vector-borne transmitted to humans by contact with faeces of triatomine bugs, known as 'kissing bugs', among other names, depending on the geographical area.