Where in health am I? : Home / Health Cloud / Challenges / Infections / Parasites / Cysticercosis

I see this as a disease that can be treated and prevented. But there are precious few resources available for treatment and little recognition of the problem - Theodore Nash MD 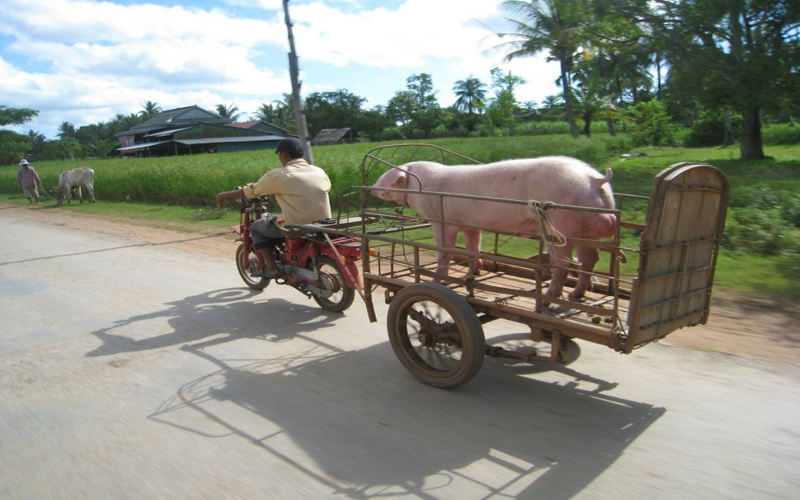 image by: World Health Organization (WHO)

A blob in the brain is not the image most people have when someone mentions tapeworms. These parasitic worms are best known in their adult stage, when they live in people’s intestines and their ribbon-shaped bodies can grow as long as 21 feet. But that’s just one stage in the animal’s life cycle. Before they become adults, tapeworms spend time as larvae in large cysts. And those cysts can end up in people’s brains, causing a disease known as neurocysticercosis.

“Nobody knows exactly how many people there are with it in the United States,” says Nash, who is the chief of the Gastrointestinal Parasites Section at NIH. His best estimate is 1,500 to 2,000. Worldwide, the numbers…

Maybe You Were Thinking About Eating Raw Centipedes. Don’t.

Dried or powdered centipedes are used in Chinese traditional medicine. But uncooked specimens may contain a parasite that infects the brain, scientists report.

Tapeworms and Other Parasites Can Make Good Guests

We tend to think of species that live inside hosts as disease-causing enemies. That may be true — but only up to a point. Medical studies have shown that humans have evolved an intimate, perhaps even necessary, relationship with many of these lodgers.

When A Suspected Brain Tumor Turns Out To Be A Parasite

When is finding a tapeworm parasite in your brain a good thing? When you originally thought that it was a brain tumor instead.

Cysticercosis is a potentially fatal and preventable neglected parasitic infection caused by the larval form of Taenia solium. Patients with symptomatic disease usually have signs and symptoms of neurocysticercosis, which commonly manifest as seizures or increased intracranial pressure. Although there are many persons living in the United States who emigrated from highly disease-endemic countries and there are foci of autochthonous transmission of the parasite in the United States, little is known about burden and epidemiology of the disease in this country.

There are two types of infections that can develop depending on the route of infection. The first type is caused by ingesting the eggs from an adult worm (expelled in animal or human feces) which results in developing cysticerci (larval stage) within the animal or human tissues. This is known as cysticercosis.

Neurocysticercosis, which is common around the world but is not recognized as a major health concern in the U.S., has taken root in California, some health officials say.

Brain Tapeworms Are Real, And They're Disgusting

You might think of tapeworms as awful parasites that find their way into your intestine, grow as big as 50 feet long, and cause horrible gastrointestinal issues. But that's only one step of a larger infectious chain the tapeworm is a part of. The alien life-form doesn't only cause crippling stomach pain; it could also debilitate mental capacities if they find their way to the brain.

Do You Have Tapeworms In Your Brain? Maybe

Mother Nature has already given us so many things to be terrified of in this world—flesh eating bacteria, tsunamis, Tan Mom, to name just a few. Tapeworms certainly deserve a place on the list too. Who among us did not become obsessed with the idea that we might have one slithering around inside our intestines when we learned of their existence in science class?

Pork tapeworms are tiny nutrient-starved horrors that use scythelike appendages to claw their way into the brains of humans. Once there, they bore cysts through the gray matter in much the same way that a garden-variety worm tunnels through an apple.

In some cases, you can use anti-parasitic medications to try to kill these parasites. However, when the parasites get damaged and die, they can cause inflammation and fluid-formation in the area, sort of like how the vampires getting killed in the movie Lost Boys isn't clean and pretty.

Put away the soy sauce and wasabi and get ready to be grossed out. A Fresno man and avid lover of sushi — more specifically, salmon sashimi — pulled a 5 1/2 foot-long tapeworm out his own body. It had been growing inside of him for some time.

See what happens when tapeworms infest your brain

A tragic case report shows the horrifying result when tapeworms don't stay confined to your intestines.

Should raw sushi-eaters be worried about tapeworms?

Very often, fish tapeworms do not cause symptoms. When symptoms do arise, they are usually non-specific and can include diarrhoea, abdominal pain, vomiting and weight loss. It’s really difficult to make the diagnosis of fish tapeworm simply by accounting for gastrointestinal symptoms.

Tapeworms -- It's Not Just Cancer That Should Worry You

People get cysticercosis when they swallow eggs passed in the stool of a person infected with an intestinal tapeworm. This commonly happens when people swallow T. solium egg-contaminated soil, vegetables or other foods, or water. When these eggs are swallowed, they hatch and become larvae that work their way to the person’s brain.

In a video of the surgery, two hands in latex gloves are seen pulling what looks like a white fettuccine out of a man’s mouth. Except, that never-ending white string is not pasta, it’s a tapeworm. It’s a 6-foot tapeworm.

The Impact of Neurocysticercosis in California: A Review of Hospitalized Cases

Neurocysticercosis (NCC) is considered one of the major neglected infections of poverty in the United States, with mortality studies indicating that California bears the highest burden of this disease. Although NCC is a reportable disease in California, studies indicate that this disease goes largely under-reported...

There are plenty of fad diets circulating the internet these days, ranging from low-carb diet practices, to the (probably) useless gluten-free diets. However, one diet is so dangerous, that the product it uses was banned in the United States by the Food and Drug Administration.

Parasitic worms leave millions of victims paralyzed, epileptic, or worse. So why isn’t anyone mobilizing to eradicate them?

Taenia solium is an intestinal infection with adult tapeworms that follows ingestion of contaminated pork. Cysticercosis is infection with larvae of T. solium, which develops after ingestion of ova excreted in human feces. Adult worms may cause mild GI symptoms or passage of a motile segment in the stool. Cysticercosis is usually asymptomatic unless larvae invade the CNS, resulting in neurocysticercosis, which can cause seizures and various other neurologic signs.

Taeniasis is an intestinal infection caused by 2 species of tapeworms. The most significant infections are caused by Taenia solium (pork tapeworm) and Taenia saginata (beef tapeworm). Humans can become infected with T. saginata when they consume beef which has not been adequately cooked, but Taeniasis due to T. saginata has no major impact on human health. Infection with T. solium can occur if humans consume contaminated water or food such as raw, undercooked or infected pork, and as a result of poor hygiene. This infection can result in devastating effects on human health.