Where in health am I? : Home / Health Cloud / Challenges / Infections / Parasites / Worms / Hookworms

For only in a society made up of parasite-free individuals will we know of what the human being is capable - Norman R. Stoll 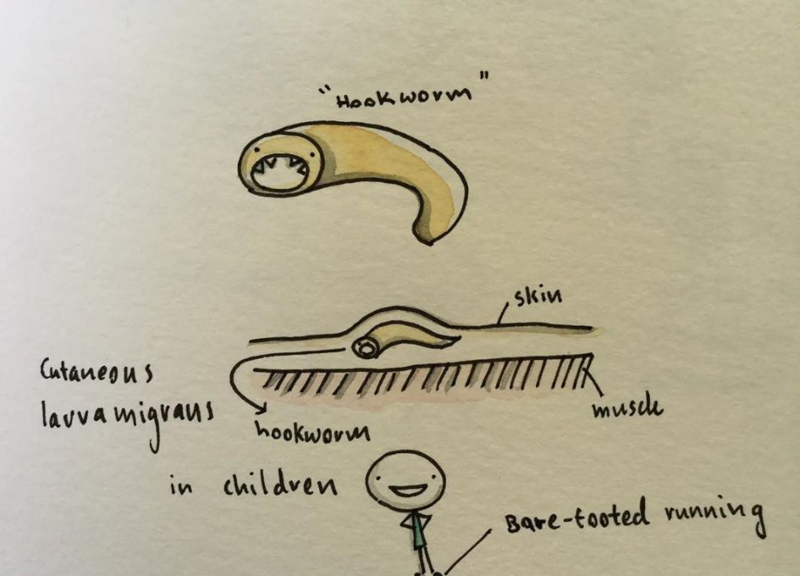 A New Malnutrition Vaccine for the World’s Poor

When we think about the world’s most pressing global health issues, usually diseases or conditions such as HIV/AIDS, malaria or influenza come to mind. But a report just released in the prestigious medical journal, Blood, reveals that anemia is now one of the most important causes of global illness, especially among women and children. These studies, led by Seattle’s Institute of Health Metrics and Evaluation, determined that one-third of the world’s population suffers from at least one form of anemia, which is responsible for almost 9 percent of all of the world’s disability.

For people living in the poorest countries…

Hookworms in Emergency Department: The ＂Vampire＂ Within

A common treatment of hookworm is the usage of benzimidazole class of anthelmintics, mainly representedby albendazole and mebendazole. The drugs eliminate adult worms by inhibiting microtubule polymerization in invertebrates. A single 400 mg dose of albendazole is more effective than a single 500 mg dose of mebendazole. Three consecutive daily doses of either drug improve both cure and egg reduction rates. An alternative possibility could be the administration of a single dose of oral ivermectin 200mg/kg.

Hookworms: the most common travel health risk no one warns Americans about

No one wants worms in their feet. But unfortunately, hookworms don't respect personal boundaries. They will take any chance you give them to burrow into your flesh, enter your bloodstream, and wend their way to your intestines, where they will take up residence for up to five years, stealing your nutrients and sapping your literal lifeblood.

The U.S. Thought It Was Rid Of Hookworm. Wrong

Hookworm was rampant in the U.S. more than 100 years ago. It thrived in the poor south, where many families could not afford proper outhouses and sewer systems were rare. Thanks to widespread treatment efforts, education and economic development, the parasitic worm was eradicated in the U.S. although the exact date isn't clear — somewhere between the 1950s and the 1980s. Hookworm was now just a problem of the developing world — or so we thought.

War of the Worms

Hookworms are excellent parasites: they are in us for the long haul, so they are rarely fatal, but heavy hookworm infection leads to anemia, and in children that anemia can be so severe that it affects development and school performance.

How a Worm Gave the South a Bad Name

Hookworms once sapped the American South of its health, yet few realize that they continue to afflict millions.

In the early 20th century, when rural residents tended to use bushes as privies, hookworm infestations bedeviled many communities, especially in the South, where some counties reported infection rates of 75%.

The hookworm (Necator americanus) is a parasite that's been called "the germ of laziness," due to the exhaustion and mental fogginess it tends to inflict upon its victims. Historical evidence shows the parasite ravaged the American South throughout the early 20th century, as a result of poor sanitation and a lack of public health programs among the poor.

These Blood Suckers Cost $2.5 Billion to $138 Billion Each Year

Yes, hookworms suck...in many ways. They do not make good pets, roommates or party guests. Hookworms bear some resemblance to the "graboids" in the movie Tremors (you know the movie with Kevin Bacon in it). There are differences in appearance, and hookworms are much, much smaller (usually less than 1 cm long).

Trying To Get The World Unhooked From Hookworm

Hookworm disease is the leading cause of anemia and protein deficits in developing nations, affecting an estimated 740 million people, mainly in the tropics of Africa (especially in sub-Saharan Africa), India and the Indian subcontinent, South America and Southeast Asia.

A New Malnutrition Vaccine for the World’s Poor

For people living in the poorest countries in Asia, Oceana, Latin America and Africa, a neglected tropical disease (NTD) called hookworm is one of the leading causes of anemia. Today more than 400 million people suffer from hookworm, making it one of the most common conditions among people living in poverty.

Parasites are typically seen as dangerous, as well as disgusting: The nastier ones can gnaw off a fish’s tongue, hijack an ant’s brain, or cause human limbs to swell to grotesque deformity. But don’t recoil just yet. Parasites can also have some beneficial impacts on human hosts. Here’s how...

Hookworms are nematode parasites that usually get transmitted through infested soil. They usually affect the poorest individuals in tropical and subtropical areas. Two species are mainly responsible for human infections, Ancylostoma duodenale, and Necator americanus.