Thanks to antiretroviral medications this infection is now relatively uncommon. But it most certainly has not gone away - Joseph Sonnabend MD 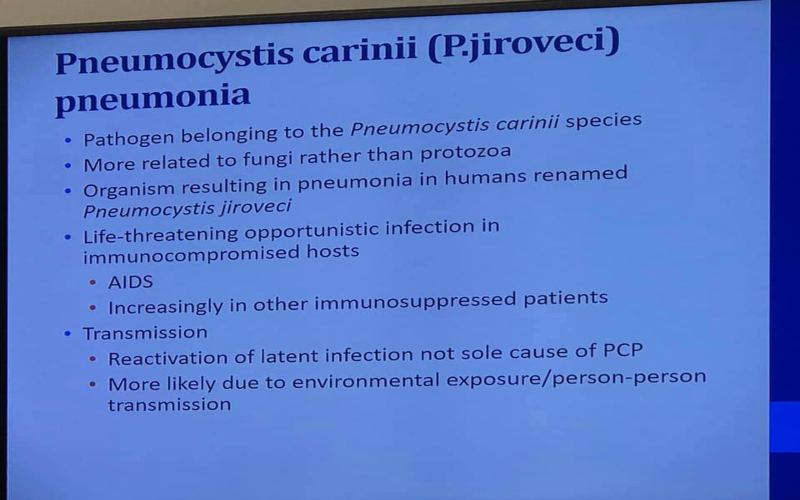 You might not believe me, but there is an excellent chance that you have already been infected by an organism that causes a potentially deadly form of pneumonia, a pneumonia so virulent that most people that develop symptoms die regardless of treatment. To make matters worse, you were probably infected before the age of four, before your immune system was even fully developed. Have your parents ever told you the story of your harrowing infant battle with pneumonia? No? Maybe it's because you caught it from them and they don't want you to guilt trip them.

In truth, unless you were born with limited immune function, you never got outwardly sick or showed any symptoms of pneumonia. But,…

Pneumocystis jiroveci pneumonia (PCP) – formerly known as Pneumocyctis carinii pneumonia – with newly diagnosed AIDS is an uncommon presentation in people over 50 years of age. A high level of suspicion is required for this diagnosis when an elderly patient with pneumonia is not responding to broad-spectrum antibiotic treatment.

Since its initial misidentification as a trypanosome some 100 years ago, Pneumocystis has remained recalcitrant to study. Although we have learned much, we still do not have definitive answers to such basic questions as, where is the reservoir of infection, how does Pneumocystis reproduce, what is the mechanism of infection, and are there true species of Pneumocystis?

Pneumocystis Carinii Pneumonia (PCP), now referred to as Pneumocystis Jirovecii Pneumonia is a fungal infection that most commonly affects the immunocompromised and, in some cases, can be severely life-threatening. Typically, patients at risk are those with any underlying disease states that alter host immunity such as those with cancer, the HIV, transplant recipients, or those taking immunosuppressive therapies and medications.

The long road to PCP prophylaxis in AIDS. An early history

Thankfully, with the widespread use of antiretroviral drugs, many people may not be too familiar with this opportunistic infection. It most certainly has not gone away, but in the 1980s Pneumocystis pneumonia was what most commonly killed people with AIDS.

Immunity to Pneumocystis is a dynamic interplay between nearly every arm of the immune system and animal models of infection have increased our understanding of host responses to this elusive fungal pathogen.

Pneumocystis jirovecii—from a commensal to pathogen: clinical and diagnostic review

In the 1980s, HIV and AIDS exploded into worldwide prominence. The once obscure Pneumocystis jiroveci was suddenly thrust into the spotlight when it was determined that about 50% of all AIDS patients were dying of Pneumocystis pneumonia, a lung infection caused by the fungal pathogen P. jiroveci.

The best way to prevent PCP is to use strong ART. People who have less than 200 CD4 cells can prevent PCP by taking the same medications used for PCP treatment.

Guidelines for the prevention and treatment of opportunistic infections in HIV-infected adults and adolescents.

Pneumocystis pneumonia (PCP) is a serious illness caused by the fungus Pneumocystis jirovecii. PCP is one of the most frequent and severe opportunistic infections in people with weakened immune systems, particularly people with HIV/AIDS. Although people with HIV/AIDS are less likely to get PCP today than in recent years, PCP is still a significant public health problem.

PCP is one of the most common pediatric illnesses associated with AIDS, especially in babies younger than 6 months old. Its prevention is very important in AIDS care since it is a leading cause of death in people with AIDS.

Pneumocystis jiroveci was a relatively rare infection before the AIDS epidemic. Pneumocystis pneumonia can be life-threatening, causing respiratory failure that can lead to death. People with this condition need early and effective treatment. For moderate to severe pneumocystis pneumonia in people with AIDS, the short term use of corticosteroids has decreased the incidence of death.

Pneumocystis pneumonia (PCP) is a major cause of morbidity and mortality among immunocompromised people. It remains a leading AIDS-defining opportunistic infection in HIV-infected individuals. Pneumocystis is primarily a pulmonary pathogen but the incidence of extrapulmonary disease has been estimated at 0.06-2.5% of cases.

Pneumocystis pneumonia is essentially not seen in individuals with an intact immune system. It is particularly seen in patients with AIDS and therefore the demographics match those of the AIDS population. In order to be susceptible to PCP, the patients CD4 count usually has to fall below 200 cells/mm3.