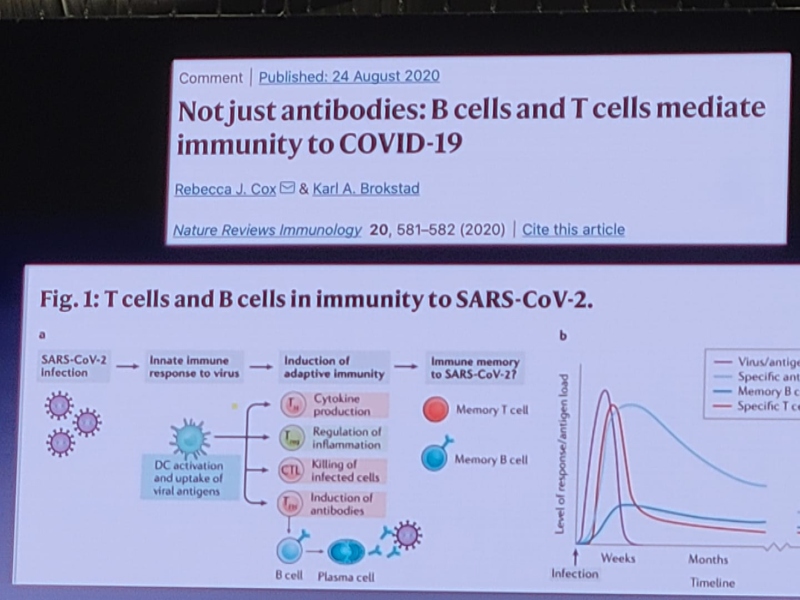 In our quest to stop the COVID-19 pandemic by vaccination, we have been myopically focussed on inducing antibodies against the spike protein. As variants of SARS-CoV-2 have emerged that reduce the ability of such antibodies to block infection, concern has arisen that we will not be able to halt the disease. Such concerns appear to ignore the other important arm of the adaptive immune response: T cells.

Anti-viral antibodies can prevent infection of cells, but when antibody titers are low – years after infection or vaccination – some cells will inevitably be infected. In this case, T cells come to the rescue. Cytotoxic T cells can sense that a cell is infected and kill it (illustrated). T cells sense infected cells by virtue of viral peptides that are presented by major histocompatibility molecules on the plasma membrane. Such T cell peptides may be produced from nearly any viral protein. In contrast, only certain viral proteins, like the spike of SARS-CoV-2, can give rise to antibodies that block infection.

The T cell response to SARS-CoV-2 infection has been largely ignored for the past year. Certainly, some laboratories have studied T cell responses in patients, and the vaccine makers have dutifully included them along with assays for neutralizing antibodies. But the dialogue has never included T cells as important for resolving disease – but they are for most viral infections. Because T cells can kill virus infected cells, they can help prevent disease and end the infection.

The recent finding that amino acid changes in the spike protein of SARS-CoV-2 variants of concern do not impact T cell reactivity is very good news. In this study, the authors synthesized short peptides covering the entire proteome of multiple SARS-CoV-2 isolates, including the original Wuhan strain, and variants B.1.1.7, B.1.351, P.1, and CAL.20C. They found little difference in the ability of T cells from either convalescent or vaccinated patients to recognize peptides from these viruses. This result means that the amino acid changes in the variants are not likely to impact the ability of T cells to clear infection.

This observation explains why some COVID-19 vaccines have effectively prevented hospitalization and death even in regions where variants circulate widely. In some cases the ability of sera from vaccinated individuals have reduced ability to neutralize infection with some variants. Nevertheless, the vaccines prevent severe COVID-19 and death because T cells can still recognize variant virus-infected cells and clear them.

It’s highly unlikely that vaccination will prevent infection with SARS-CoV-2. Antibody levels rapidly decline after infection or vaccination, especially in the respiratory mucosa. When a virus enters the nasopharynx of an immune individual, it will encounter little antibody opposition and will initiate an infection. However memory B and T cells will spring into action and within a few days produce virus-specific antibodies and T cells. The antibodies will limit infection while the T cells will clear the virus-infected cells. The result is a mild or asymptomatic infection that likely is not transmitted to others.

The recent observations that vaccination appears to prevent asymptomatic infections is a red herring. These studies are being done soon after vaccination when antibody levels in serum and mucosa are high. If these studies were done a year after immunization, the results would be quite different.

Now imagine that you are fully vaccinated and become infected with a SARS-CoV-2 variant. The virus may begin to reproduce rather well in the nasopharynx even in the face of a memory response, because the antibodies are just not good enough to block infection. T cells to the rescue: the T cell epitopes on the surface of the infected cells are readily recognized because they are mainly the same in the variants as in the ancestral strain of SARS-CoV-2. You may have a mild infection but you will not be hospitalized or die. Isn’t that the goal of vaccination?

It is possible that SARS-CoV-2 will continue to produce altered spike proteins that will completely evade antibody neutralization. In this case T cells might not be enough to prevent severe disease – they could be overwhelmed by so many infected cells. Our rush to make vaccines – understandable given the urgency – have led us to such a situation. Most of the vaccines were based only on the spike protein. If we change the spike protein to accommodate variants, we might get in a never-ending cycle of changing COVID-19 vaccines on a regular basis. A better approach would be to produce second-generation COVID vaccines that include other viral proteins besides spike protein. Inactivated and attenuated vaccines fall into this category; another solution would be to modify authorized mRNA vaccines to encode additional viral proteins.

Unlike tests that detect bits of SARS-CoV-2 or antibodies to it, the new test, called T-Detect COVID, looks for signals of past infections in the body’s adaptive immune system — in particular, the T cells that help the body remember what its viral enemies look like. Developed by Seattle-based Adaptive Biotechnologies, it is the first test of its kind.

New Type of Test May Better Discern Immunity to the Coronavirus

“There’s a growing realization that T cells are important and may even be a better indicator of clinical outcome” than antibodies, said Alessandro Sette, an immunologist at the La Jolla Institute for Immunology in California.

New findings suggest past infections may offer some protection against the novel coronavirus.

There is remarkable news regarding the immune response to SARS-CoV-2. It is clear now that the virus mutates to evade the neutralizing antibody responses. There are new results that suggest that is not the whole story. When it comes to another arm of immunity, T-cell immunity, high response to one form of the virus means high response to them all

What's the Difference? B-cells and T-cells

There are two main types of T-cells: helper T-cells and killer T-cells. Helper T-cells stimulate B-cells to make antibodies and help killer cells develop. Killer T-cells directly kill cells that have already been infected by a foreign invader. T-cells also use cytokines as messenger molecules to send chemical instructions to the rest of the immune system to ramp up its response.

This suggests that antibodies to COVID may not last very long. But this does not exclude the existence of memory T and B cells, capable of re-emerging from their dormant states to protect against re-infection. In other words, the antibodies that B cells make during initial exposure disappear in a few weeks, but the memory cells generated as a consequence of this persist for much longer.

Coronavirus: how T cells are involved and what it might mean for vaccine development

A recent study – which has yet to be peer-reviewed – assessed T cell memory responses in patients who had recovered from mild and severe COVID-19. Patients who had severe symptoms showed a stronger and more varied T cell response. Their T cells reacted to the virus’s spikes, but also to internal components of the virus – which have cumbersome names such as “receptor binding domains” and “nucleoproteins”.

In the race against emerging coronavirus variants, researchers are looking beyond antibodies for clues to lasting protection from COVID-19.

Results underline the importance of a second COVID-19 vaccine dose for the body's immunity and include implications for booster shots.

The accumulating evidence supports a role for T cells in COVID-19 and probably in the immunological memory that forms following recovery from SARS-CoV-2 infection. Most, although not all, patients who are hospitalized seem to mount both CD8+ and CD4+ T cell responses, and evidence points to possible suboptimal, excessive or otherwise inappropriate T cell responses associated with severe disease.

COVID-19 vaccines induce both virus-specific antibodies and T cell responses, but it is the neutralizing antibodies (nAbs) that interfere with the entry of SARS-CoV-2 into host cells that are considered to be key for host protection. However, the level of nAbs declines with time after SARS-CoV-2 infection or vaccination. Moreover, recently emerging SARS-CoV-2 variants can escape nAbs elicited by natural infection or vaccination.

In their study of recovered COVID-19 patients, the researchers determined that SARS-CoV-2-specific CD8+ T-cell responses remained largely intact and could recognize virtually all mutations in the variants studied.

The people with hidden immunity against Covid-19

While the latest research suggests that antibodies against Covid-19 could be lost in just three months, a new hope has appeared on the horizon: the enigmatic T cell.

T cells will save us from COVID-19

The T cell response to SARS-CoV-2 infection has been largely ignored for the past year. Certainly, some laboratories have studied T cell responses in patients, and the vaccine makers have dutifully included them along with assays for neutralizing antibodies. But the dialogue has never included T cells as important for resolving disease – but they are for most viral infections. Because T cells can kill virus infected cells, they can help prevent disease and end the infection.

T-Detect COVID correctly confirmed recent or prior COVID-19 infections 97.1% of the time from date of RT-PCR diagnosis with 100% specificity