To boost or not to boost? That is the question facing countries fortunate enough to have vaccinated much of their adult population - Ewen Callaway 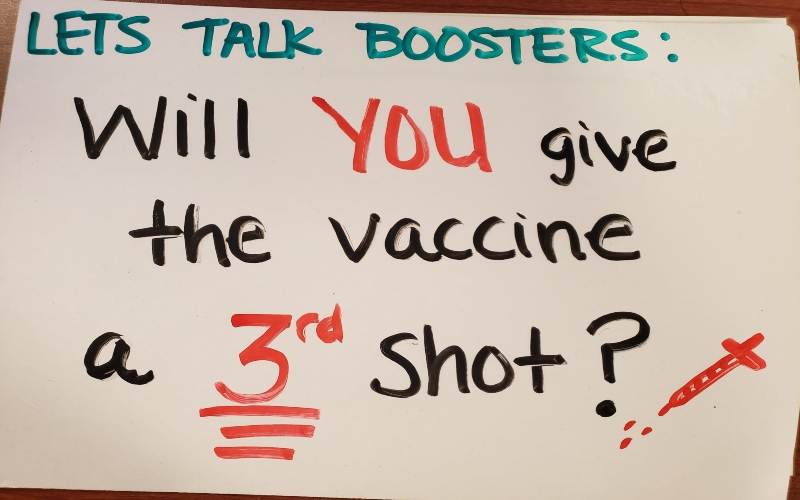 image by: WATE 6 On Your Side

While most countries are still cranking up their vaccination drives, some are already making plans to deliver millions of booster shots into arms later this year.

Concerns that Covid-19 may morph into a seasonal menace are driving preparations in the U.S., the European Union and the U.K. for a winter vaccine booster program. The plans are precautionary, according to public-health officials, and it isn’t yet certain they will be put into operation or at what scale.

Disease experts say the need for a winter vaccine drive will depend on whether vaccine-induced immunity fades over time and if the current crop of vaccines are effective against virus variants.

Scientists are still gathering data on both those issues, and the answers they find will shape the design of any booster program, including who would get one and which vaccine they might receive.

Some public-health experts say talk of booster programs is premature, given the gaps in our knowledge about the virus and the vaccines that combat it, as well as the urgent need for shots in countries such as India where the virus is spreading rapidly. “We need to have data’’ to determine if and when third doses are needed, the European Medicines Agency’s head of biological health threats and vaccines strategy, Marco Cavaleri, said this month.

But others say governments are right to move fast rather than wait for these questions to be settled.

“There is no point planning it if you have already got a resurgence,” said David Salisbury, a former director of immunization programs in the U.K. who is now an associate fellow in global health at the international affairs think tank Chatham House.

The EU said this month that it signed a contract with Pfizer Inc. and BioNTech SE of Germany for another 1.8 billion doses of their Covid-19 vaccine for delivery through 2023. The European Commission, the bloc’s executive arm, said the doses have been earmarked for booster shots and donations, or reselling if they aren’t needed. The population of the EU is almost 450 million, meaning that order alone would be enough to give everyone in the bloc two shots, in addition to the millions of shots already administered.

The U.K. said in April it ordered 60 million more doses of the Pfizer and BioNTech shot as part of its preparations for a fall and winter booster program. Health Secretary Matt Hancock said the plans are aimed at ensuring the elderly and vulnerable have the greatest possible protection against disease heading into the colder months, when increased indoor gathering gives the virus more chance to spread. Scientists in the U.K. on Wednesday began recruiting for a clinical trial to investigate the effects of a third dose of vaccine on volunteers’ immune responses.

In the U.S., David Kessler, chief science officer of the White House Covid-19 response team, told lawmakers in April that booster shots might be needed within a year, and if so they will be provided free of charge, with the elderly likely first in line. The U.S. is forecast to amass a surplus of 300 million doses of five vaccines by the end of 2021, even after assuming all adults and children over 5 years old are vaccinated, according to projections from health and science data company Airfinty Ltd.

Some vaccines, such as those given in childhood for measles, mumps and rubella, offer lifelong immunity against disease. For others, booster shots are recommended at periodic intervals or if the risk of exposure climbs. Adult booster shots for tetanus and meningitis are a common feature of national immunization schedules.

Influenza, by contrast, mutates quickly and shots are tailor-made each year to protect people against circulating strains.

Exactly where the vaccines developed against Covid-19 fit on this spectrum isn’t yet clear. Some scientists are optimistic the vaccines will confer long-lasting immunity, while others aren’t so sure. Another issue is whether existing vaccines provide sufficient protection against variants of concern, such as those first identified in South Africa and India, and if they will stand up to any new variants that may yet emerge.

“We don’t have a full picture of what the pathway is to protection,” said Gigi Gronvall, an immunologist and associate professor at the Johns Hopkins Bloomberg School of Public Health.

Complicating both questions are the different technologies being used in the world’s armory of vaccines. Shots that use an inactivated virus to stimulate the immune system might perform differently from others that use messenger RNA, a molecule that directs cells to make antibodies against the virus. Little is known about the risk of side effects from multiple doses.

Governments considering booster programs also face logistical hurdles, such as whether to vaccinate everyone or just the elderly and vulnerable.

Paul Hunter, professor of medicine at the University of East Anglia, said it wouldn’t be a surprise if vaccine-induced immunity diminished over time, as a similar phenomenon is seen in natural infection with other coronaviruses.

The evidence for Covid-19 vaccines so far is limited and inconclusive: Pfizer and BioNTech have said their vaccine is around 91% effective against Covid-19 six months after a second dose, down slightly from the 95% level observed in clinical trials.

Evidence of waning immunity would strengthen the case for a third dose to top up people’s protection as winter approaches, said Prof. Hunter. Existing vaccines would still have a role to play in booster programs if they bolster protection against widely circulating strains such as B.1.1.7, a variant first detected in England, while newer vaccines aimed more squarely at other variants move through clinical trials and regulatory scrutiny, said Prof. Salisbury.

Moderna Inc., for instance, is developing a vaccine tuned to fight the South Africa variant B.1.351. GlaxoSmithKline PLC is working with Germany’s CureVac NV on an early-stage vaccine designed to combat multiple variants, and with Sanofi SA on a more advanced candidate the companies say could be deployed as a booster shot, after trials pointed to a robust immune response in people already exposed to the virus.

For some scientists, the case for Western nations using up more shots while the pandemic rages elsewhere is weak. Peter English, a public-health physician who worked as a consultant in using vaccines to control infectious diseases, said he is skeptical that immunity will wane significantly anytime soon in those who have been fully vaccinated and doses of first-generation vaccines could be put to better use.

“If we’re not going to use a variant vaccine, we’d be better off shipping the vaccine to India or somewhere where they need it more than we do,” he said.

Instead, though, the administration’s recent moves have pitted it against recommendations from VRBPAC and the ACIP, a tension that hasn’t gone unnoticed by former government officials.

Richer countries should focus on ramping up vaccine supply to the billions who are still waiting for their first dose.

You could probably sneak in a COVID-19 booster shot right now. But there are a few good reasons to hold off.

COVID-19 Vaccine Booster Shots Will Likely Be a Reality. Here’s What Experts Know So Far.

With so much uncertainty about booster shots, we asked doctors to explain why a third dose may be necessary in the near future.

Do You Need Another Covid Shot?

Making sure all people worldwide have vaccine access should be the highest priority, because population immunity is the best way to protect individuals, too. Only then should additional doses be given to already vaccinated people. But we should be prepared to accept that some groups may eventually need an additional dose for full protection.

There are still scientific and ethical questions.

Concerns over waning immunity and SARS-CoV-2 variants have convinced some countries to deploy extra vaccine doses — but it’s not clear to scientists whether most people need them.

Immunocompromised people looking for extra doses are low-hanging fruit in the effort towards herd immunity, Branch-Elliman says. U.S. officials are expending a huge amount of energy trying to convince vaccine skeptics to get shots, while people who have already proven that they want vaccines—but who did not reap their full benefits—are practically begging for extra protection.

The evidence is showing vaccination is working: immunity is lasting and is protecting us against the worst effects of COVID-19. So why is the UK planning on third booster shots when there isn’t clear evidence that there’s a need? A huge concern should be that the majority of people in the world still remain unvaccinated. In many low-income countries as little as 1% of eligible adults have received one vaccine dose.

Necessary or Not, Booster Shots Are Probably Coming

This has led to confusion. Should the nearly 60 percent of adult Americans who have been fully vaccinated seek out a booster or not? Is the protection that has allowed them to see loved ones and go out to dinner fading?

The Case Against Boosters

This isn’t the kind of protection we need right now.

New vaccine recipes, which haven’t yet been cleared, could also play a role in future vaccination efforts. Some researchers are looking outside the spike protein, to see whether they can build shots that contain more instructive bits of SARS-CoV-2 anatomy.

The WHO said the moratorium would help towards the goal of vaccinating at least 10% of every country’s population by the end of September. Washington has not yet announced a booster vaccination plan. But the White House appeared to reject the WHO’s call, arguing it could deliver doses to Americans and support global vaccination efforts.

What You Need to Know About COVID-19 Booster Shots

While the vaccine makers are understandably eager to sell an additional dose of their shots, the FDA said in a July 8 statement that boosters for the U.S. are premature at this point.

When and how will we know if we need Covid-19 booster shots?

There’s a lot we don’t yet know about the data behind Pfizer and BioNTech’s renewed push to change their two-shot Covid vaccination series to a three-shot regimen. But as various factions bicker about whether a third shot is going to be needed, one thing is certain: The final decision will not rest with the companies.

Which countries are considering booster vaccines for covid-19?

THE RACE TO vaccinate the world is not a fair one. Even as some countries struggle to get first doses out into the arms of their most vulnerable, countries with advanced vaccination campaigns are starting to consider giving “booster” shots.

WHO calls for moratorium on booster shots – is it justifiable?

Although booster jabs would prioritise the most vulnerable people in high-income countries, the degree of additional benefit that boosters would have for these people – beyond the original vaccination – is uncertain.

The WHO is opposed to booster shots because it considers it more pressing to get the majority of people in poor countries vaccinated with their first two doses than to get people in rich countries an extra dose.

Will we need booster shots?

As long as large pockets of people remain unvaccinated, she points out, we’ll continue to see surges in COVID-19 cases and new variants. Fuller suspects that over the next several years there may be regular boosters tailored to whichever variant has become dominant, similarly to the annual flu vaccines.

Western governments increase orders in case of waning immunity and variant threats, but need isn’t clear yet and much of world lacks initial doses

Will you need a booster? Does it matter if you got Pfizer, Moderna, J&J, or another vaccine?