Oh, it works. I thought so - Katalin Kariko MD 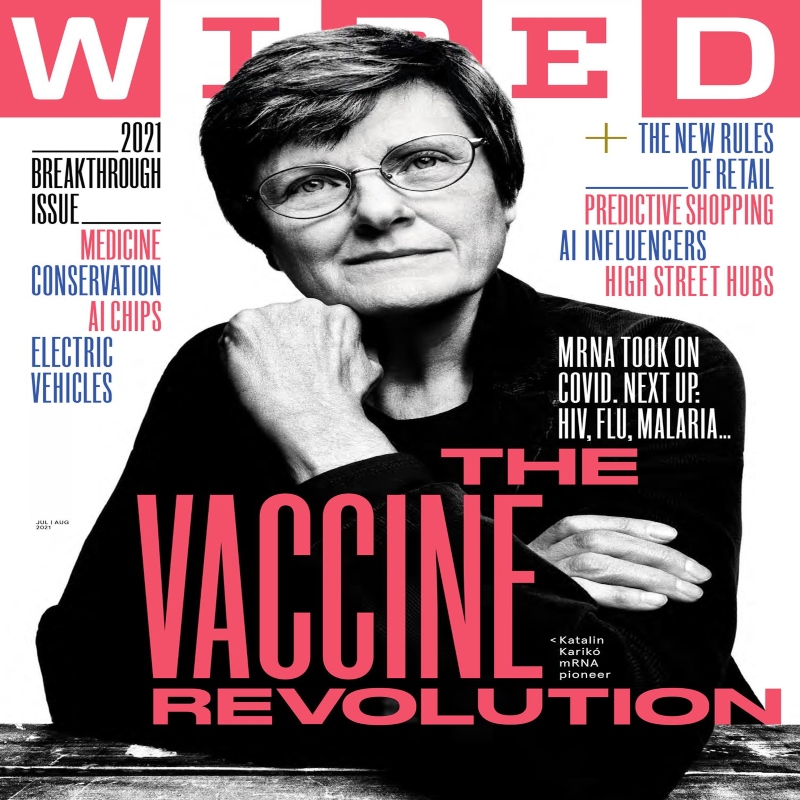 If the Pfizer and Moderna vaccines successfully put an end to the COVID-19 pandemic, as they seem poised to do, we will owe our salvation to the development of mRNA vaccines — an unprecedented, novel vaccine technology that may revolutionize how vaccines are made.

Indeed, an mRNA vaccine has never been mass-produced and licensed to treat an infectious disease. The mRNA vaccines to treat the novel coronavirus would be the first.

Yet understanding the quantum leap that mRNA vaccines represent requires understanding where we are right now. The biotechnology giants Moderna and Pfizer/BioNTech announced last month that they had seen promising results as they near the end of clinical trials for their vaccine candidates. Both vaccines are likely to be produced on a wide scale and distributed en masse to the public.

Yet what is particularly striking is that both are mRNA vaccines, mRNA being short for "synthetic messenger RNA." Understanding why these are so novel requires some background on the history of vaccination.

Another related subtype of conventional vaccines are called protein subunit vaccines; these are considered very safe, Pardi said, as they introduce "non-living, non-infectious materials" that include one or more antigens from a given pathogen. Once introduced to the body, the immune system learns how to recognize the pathogen in the future.

Viral vector-based vaccines, and genetic vaccines like those which use DNA and RNA, are the second and third main vaccine technologies.

"When you use viral-vectored-based or genetic vaccines, you deliver a blueprint that will allow the host cells to produce protein antigens that will then induce an immune response," Pardi said.

This is a bit more sophisticated than the standard conventional vaccine, in that you're giving the cells a blueprint rather than a piece of the pathogen itself. In other words: conventional vaccines, which are either a weakened form of the pathogen or genetic "pieces" of it, teach the immune system to recognize the real pathogen after seeing these similar versions. It would be akin to recognizing a specific brand of car after seeing an ad for it, or even just a partial picture of its hood. But a viral vector-based vaccine or genetic vaccine would be more akin to recognizing what a Ford Focus looks like having only seen its blueprint.

The third and completely new technology, and the crux of this story, is the mRNA vaccine. For these, scientists create synthetic versions of mRNA, a single-stranded RNA molecule that complements one of the DNA strands in a gene. They then inject a bespoke version of the mRNA into the body, so that cells can produce proteins like those found in a given virus and train the immune system to fight a particular disease before it enters your bloodstream. Think of it as being a bit like training a soldier to fight against actors playing an enemy so they can be better prepared to fight the actual enemy.

In the case of the SARS-CoV-2 mRNA vaccines, these train the body's cells to recognize a protein associated with SARS-CoV-2, the virus that causes COVID-19, known as Spike. Spike is the protein that creates the little points that stick out around the sphere of the virus like the spines of a sea urchin. By helping the body's cells to produce Spike, the vaccines in the process train the immune system to recognize it and protect the human body from novel coronavirus infections.

The holy grail of vaccine technology?

Dr. Katalin Karikó, a Hungarian biochemist who specializes in RNA-mediated mechanisms and work as a senior vice president at BioNTech RNA Pharmaceuticals, explained to Salon about what makes these new vaccines so different.

"Vaccines containing killed viruses or viral proteins will only induce antibodies," Karikó explained, referring to how conventional vaccines work. "Meanwhile, mRNA vaccines, in addition to antibodies, also induce cellular immune response," she added, "because the encoded viral proteins are synthesized inside the cell of the vaccinated person." This is an immunological double-whammy: the mRNA injected makes one's body literally synthesize the same proteins that the virus will synthesize, as though it's a dress rehearsal for real infection.

Karikó added that cellular immune response is important because although antibodies will eliminate and recognize viruses in the blood, there is a second type of white blood cell called T cells that recognize infected cells, and destroys them. In other words, antibodies patrol the bloodstream; T cells look for houses that have already been infiltrated. "That's what the BioNTech mRNA vaccine demonstrated," Karikó said. "It induced coronavirus-specific antibodies and T cells."

As for mRNA vaccines like the ones developed by Moderna and Pfizer/BioNTech — which are technically known as "nucleoside-modified mRNA vaccines" — Pardi explained that they are "have two more critical advantages: the flexibility of antigen design stemming from their fully synthetic nature and the ease of production." He emphasized that "once you have the coding sequence(s) of your antigen(s) you want to target you can quickly make these vaccines." He noted that Moderna made their vaccine in just 42 days after they had figured out SARS-CoV-2's genetic sequence.

These mRNA vaccines are also quicker and easier to modify if necessary, Pardi noted. "You can use the same manufacturing procedure to produce different mRNAs . . . this makes production much faster, simpler, and potentially cheaper."

The long road to mRNA vaccines

mRNA vaccines are a very new technology, and had a long road to being developed. Indeed, it has been thirty years since the first paper came out that proposed using mRNA for vaccines.

"There was very slow progress in the development of mRNA-based therapeutic approaches because there were two major hurdles that needed to be overcome," Pardi told Salon. The first hurdle was "the instability of mRNA and the lack of a safe and efficient carrier molecule that can protect mRNA from rapid degradation." Because mRNA is fragile, you can't just put it in water and inject it; it needs to sit inside something.

The second problem was more macroscopic: inflammation. Or, as Pardi described it: "the lack of methods that could decrease inflammation induced by the administration of mRNA."

The inflammation problem was solved in 2005 by Karikó and a colleague from the University of Pennsylvania, Dr. Drew Weissman. The two of them discovered that, by "replacing some of the building blocks of mRNA," they could almost eliminate inflammation.

As for the carrier molecule problem, Pardi added that subsequent technological advancements helped develop better delivery materials for mRNA, particularly a material called lipid nanoparticles, or LNPs. "Both the Moderna and Pfizer/BioNTech SARS-CoV-2 vaccines use the nucleoside-modified mRNA-LNP platform," Pardi said. This method has been found to be safe and effective in the Phase III clinical trials from both companies.

Karikó made considerable career sacrifices in the name of developing mRNA vaccines. Her belief that they could work got her demoted at the University of Pennsylvania in 1995, according to STAT News, which pointed to the fact that there was no money coming in to sponsor her work on mRNA. Yet Karikó has since been amply vindicated; the 2005 papers by her and Weissman were noticed by scientists who later helped found Moderna and BioNTech, Pfizer's future partner.

Dr. Derrick Rossi, who helped found Moderna, bluntly told STAT News that Karikó and Weissman deserve the Nobel Prize in chemistry. "If anyone asks me whom to vote for some day down the line, I would put them front and center," Rossi said. "That fundamental discovery is going to go into medicines that help the world."

Indeed, one wonders how the world would be different if Karikó and Weissman had not succeeded in realizing their vision regarding mRNA technology.

"It is hard to say," Pardi said. "One thing is pretty sure, we would not have been able to develop nucleoside-modified mRNA vaccines," or the type of vaccines used by Pfizer/BioNTech and Moderna.

Karikó herself told Salon that other biotechnology had progressed tremendously in the past ten years, including the ability to sequence viral RNA quickly, and that this helped speed the vaccine. "Those who were making vaccines against this coronavirus this year were relying on sequence information published by Chinese scientists in early January 2020," she noted humbly.

It also seems safe to speculate that, if Karikó and Weissman had not prevailed through hard work and ingenuity, we may not have the technology available right now to develop COVID-19 vaccines. Likely, the vaccines would have still come, albeit later — and it's all because they were ahead of the curve about the potential of mRNA vaccines.

Source: Matthew Rozsa, Why mRNA vaccines like those being made to treat coronavirus are a quantum leap for biotech, Salon, December 5, 2020.

Kati Kariko Helped Shield the World From the Coronavirus

Collaborating with devoted colleagues, Dr. Kariko laid the groundwork for the mRNA vaccines turning the tide of the pandemic.

mRNA Was Supposed To Stay Ahead Of Variants. Why Aren't We Using Its Full Potential?

Part of the exciting promise of modified mRNA technology that built Moderna and Pfizer’s coronavirus vaccines was an assurance against variants that might one day evade the vaccines’ protection. If any troublesome mutations arose, researchers said, manufacturers would be able to reprogram the string of genetic code inside the vaccines to counter that.

The COVID-19 pandemic brought mRNA vaccines into the limelight. But the technology may also prove to be a powerful weapon against hard-to-treat cancers.

The mRNA Vaccines Are Extraordinary, but Novavax Is Even Better

Persistent hype around mRNA vaccine technology is now distracting us from other ways to end the pandemic. But here’s what we know today, based on information that we have right now: Among several wonderful options, the more old-school vaccine from Novavax combines ease of manufacture with high efficacy and lower side effects. For the moment, it’s the best COVID-19 vaccine we have.

Everything You Need to Know About mRNA, the COVID-19 Vaccine’s Secret Weapon

Pfizer and Moderna both use this tech in their breakthrough vaccines. But how does it work? And is there a catch?

Beyond COVID: mRNA Vaccines May Treat Cancer and More

This plug-and-play technology is revolutionizing vaccinology.

mRNA vaccines face their first test in the fight against Covid-19. How do they work?

Messenger RNA may not be as famous as its cousin, DNA, but it’s having a moment in the spotlight. This crucial intermediary in the protein-making process is now being harnessed by scientists to to try to protect us from disease — including Covid-19.

The story of mRNA: How a once-dismissed idea became a leading technology in the Covid vaccine race

It is called synthetic messenger RNA, an ingenious variation on the natural substance that directs protein production in cells throughout the body. Its prospects have swung billions of dollars on the stock market, made and imperiled scientific careers, and fueled hopes that it could be a breakthrough that allows society to return to normalcy after months living in fear.

Why adenovirus and mRNA vaccines could start a revolution.

Two doses, separated by three to four weeks, is the tried-and-true approach to generate an effective immune response through vaccination, not just for COVID but for hepatitis A and B and other diseases as well. The first dose primes the immune system and introduces the body to the germ of interest. This allows the immune system to prepare its defense.

No mRNA vaccine has ever been mass-produced to fight a disease — coronavirus would be the first.

Such mRNA vaccines have many benefits. They are quick to design, so once the manufacturing platform is set up, mRNA vaccines can be designed to target different viruses, or variants, very quickly. The vaccine manufacturing is also fully synthetic, and doesn’t rely on living cells like chicken eggs, or cultured cell lines. So this technology is here to stay. However, there are still issues we need to improve on to help make mRNA vaccines become more practical and affordable for the entire world, not just first-world countries. Here are four areas mRNA vaccine researchers are working on.