If you think vaccination is an ordeal now, consider the 18th century version. After having pus from a smallpox boil scratched into your arm, you would be subject to three weeks of fever, sweats, chills, bleeding and purging with dangerous medicines, accompanied by hymns, prayers and hell-fire sermons by dour preachers - Arthur Allen 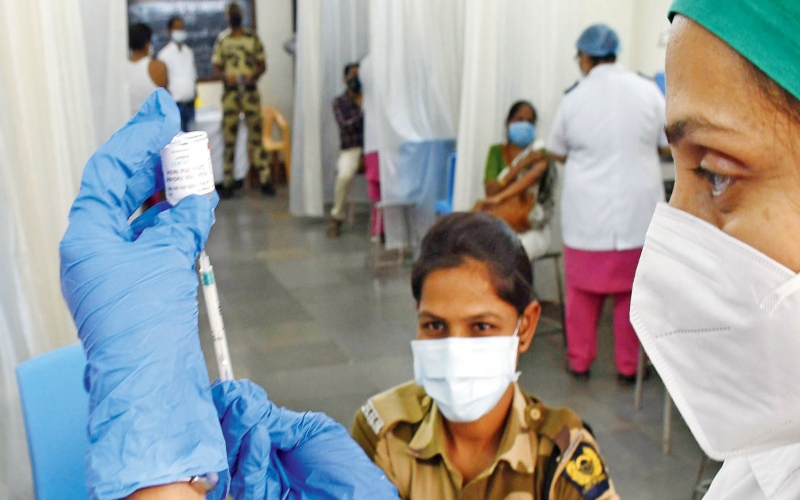 Abigail, a 29-year-old from New York City who asked to use a pseudonym to preserve her privacy, knew to expect some side effects after she got her second Pfizer-BioNTech COVID-19 vaccine in February. The fever, body aches and fatigue she felt were nothing surprising. But when she began experiencing heavy, “stupidly painful, debilitating” menstrual periods, she felt blindsided. “I had not heard a single person talking about it,” she says.

While scientists have not confirmed that COVID-19 vaccines can cause menstrual changes like Abigail’s, she feels confident the shot was her trigger, since she experienced something similar after a probable case of COVID-19 last spring. As of mid-April, more than 19,000 people had reported similar experiences in a University of Illinois survey. Even without scientific confirmation, their stories are drawing attention to the fact that vaccination side effects can be far more varied than what’s often discussed in the mainstream.

Side effects—while temporarily uncomfortable—are a standard part of vaccination, says Dr. Stanley Perlman, a professor at the University of Iowa’s Carver College of Medicine and a member of the U.S. Food and Drug Administration’s vaccine advisory committee. They show that the body is responding to the shot and mounting an immune response. (Perlman says he considers side effects different from serious adverse events, like the rare blood clots reported in connection with Janssen/Johnson & Johnson’s shot. Most side effects are unpleasant but normal, whereas serious adverse events are potentially fatal issues that demand medical care.)

The U.S. Centers for Disease Control and Prevention (CDC) lists common COVID-19 vaccine side effects as pain, swelling or redness at the injection site; fatigue; headaches; muscle pain; chills; fever; and nausea. But that list isn’t exhaustive. In fact sheets describing each vaccine, manufacturers listed additional possible side effects—including diarrhea, joint pain, swollen lymph nodes, hives, rashes and facial swelling—and noted that there could be even more side effects beyond those specified.

Menstrual changes may fall into that category, if conclusive evidence links them to the vaccines. (In statements to TIME, a spokesperson for Pfizer said clinical trial participants did not report any menstrual changes. A spokesperson for Janssen said menstrual changes were not tracked as part of its study. A Moderna rep did not return requests for comment by press time.) There have also been reports of people developing rashes and other skin conditions, like so-called “COVID arm,” after vaccination. Others have experienced brain fog that feels akin to a marijuana high. In rare cases, people have also developed shingles after COVID-19 vaccination, as small numbers of people do after taking other types of drugs, but those findings are preliminary.

There are bound to be more side effects observed and reported by the general population than are uncovered during a clinical trial, Perlman says. Each COVID-19 vaccine trial had to have at least 30,000 participants. That’s a lot, but it’s a small fraction of the people who have been vaccinated in the U.S., now that 215 million doses have been administered. Even side effects that were uncommon during clinical trials may affect a relatively large number of people once vaccines are widely distributed, Perlman says.

Not everything that happens post-vaccination is caused by the vaccine, of course. When millions of people get vaccinated every single day, some are bound to experience health problems following but unrelated to the vaccine, Perlman says.

Even still, it’s important for people to monitor their health in the days following vaccination and alert their doctors to anything out of the ordinary, so health authorities know which side effects to emphasize or look into further, says Paul Duprex, director of the University of Pittsburgh’s Center for Vaccine Research. Members of the public can report their side effects using the CDC’s Vaccine Adverse Event Reporting System or V-safe tracker.

“Those voices matter,” Duprex says. “Patterns can only be recognized [if people who get vaccinated] voice what happened and people who hear those voices collect and collate” the data.

There’s a tendency among researchers to discount observations if their cause can’t be proven, Duprex admits. “There’s a fundamental difference between correlations and a cause,” he says. But “none of those things should be dismissed.” Only when researchers have all the data can they adequately assess what’s really happening and communicate that to the public.

“There are things that we can only learn,” Duprex says, “if those vaccinated voices are heard.”

That’s what people like Abigail are trying to make sure of, by speaking out about potential side effects like menstrual changes. Abigail says she remains glad she got vaccinated, and recommends that everyone do the same. She just wants others to go into the experience feeling more informed than she did.

Covid vaccine side-effects: what to know and why you shouldn't worry

Covid-19 Vaccine Works, Even if Side Effects Differ for All, Doctors Say

Age and other factors may play a role, but scientists say the shots provide immunity, including in the absence of fatigue, chills or other symptoms

Vaccine side effects are actually a good thing

Every vaccine comes with the chance of side effects. But with these new Covid-19 vaccines, the chances are much higher. Most people will feel pain at the injection site or fatigued. The vaccines come with more side effects than we’re used to, which can be scary. But scientists argue this is actually a good thing.

What are the side effects of the Pfizer vaccine? An expert explains

The most common side effects include headache, muscle aches and fatigue, and these are more common after dose two compared to dose one. Side effects will usually present in the first 24-48 hours after vaccination. Recently there have been reports from overseas, including the United States and Israel, of myocarditis (heart inflammation) and pericarditis (inflammation of the lining of the heart) following vaccination with the Pfizer vaccine.

Women Report Worse Side Effects After a Covid Vaccine

Men and women tend to respond differently to many kinds of vaccines. That’s probably because of a mix of factors, including hormones, genes and the dosing of the shots.

If you think vaccination is an ordeal now, consider the 18th century version. After having pus from a smallpox boil scratched into your arm, you would be subject to three weeks of fever, sweats, chills, bleeding and purging with dangerous medicines, accompanied by hymns, prayers and hell-fire sermons by dour preachers. That was smallpox vaccination, back then. The process generally worked and was preferred to enduring "natural" smallpox, which killed about a third of those who got it. Patients were often grateful for trial-by-immunization — once it was over, anyway.

COVID-19 vaccine side effects: What's normal and what to look out for

So far, all three of the available COVID-19 vaccines in the US have a pretty solid track record, especially for a fast-tracked vaccine. Still, vaccine fears and myths abound, and stories about side effects (inflated or not) incite fear among many. So which side effects are par for the course, and which are cause for concern? Here's what to expect if you get the COVID-19 vaccine, whether you get the Pfizer, Moderna or Johnson & Johnson version -- and how to report side effects to the CDC.

All Your Questions About The COVID-19 Vaccine And Facial Fillers, Answered

Primarily, it's facial swelling and redness of the area. Those are the most common and might last a few days.

Coronavirus Vaccine FAQs: What's Up With Side Effects?

Keep in mind, the side effects we're discussing here aren't the ones so serious they cause entire vaccination sites to shut down or lead to further studies on the viability of the vaccine as a whole. So, we're not going to discuss the more serious aftereffects, for instance, that have led to a temporary halt to the administration of the Johnson and Johnson vaccine in Colorado recently – when more than 26 individuals faced "adverse reactions" to inoculation, including fainting. Or the concern about blood clots and AstraZeneca. It's more the everyday things...

Covid-19 vaccine side-effects: Here’s everything you need to know

As growing numbers of younger adults get vaccinated against covid-19, social media is awash with conversation about side effects, which appear to be more common in young people. What kind of side effects can people expect...

A new real-world study finds fewer side effects after vaccination with the Pfizer/BioNTech and the AstraZeneca/Oxford COVID-19 vaccines than reported in phase 3 clinical trials, while another paper notes some instances of facial paralysis after receipt of the Pfizer or Moderna vaccine but no increased risk.

Some countries have already restricted the shot's use, but European regulators say it's worth using the vaccine mid-pandemic.

Haydon has spoken about the vaccine on CNN and CNBC. He even said he’d volunteer to be exposed to the novel coronavirus, SARS-CoV-2, if researchers want to test to see if the vaccine was actually effective. But up until now he has left out a key detail: He is, apparently, one of three people in the trial who had a systemic adverse reaction to the vaccine.

Is the Second Dose Bad? If I Feel OK, Is It Working? Can I Take Tylenol?

The most common questions about vaccination side effects, answered.

The Covid-19 vaccine side effects that specifically affect women

﻿Since Covid-19 vaccine administration began around the world, side effects have been more severe in women. According to the US Centers for Disease Control and Prevention (CDC), during the first month of vaccine administration, 62% of the doses in the US were given to women, but 71% of the side effects were reported by them. One explanation is that estrogen produces a stronger immune reaction, intensifying the overall symptoms felt after the vaccine. Similar effects have been observed with other vaccines, too.

Side effects are just a sign that protection is kicking in as it should.

The Weirdest “Side Effect” of the Coronavirus Vaccine

I had no physical reactions, but I wasn’t prepared for the emotions.

Vaccines Take a While to Kick In. Experts Say That Means the Body Is Doing Its Job.

Reports of Covid-19 cases that appeared shortly after a single shot of a two-dose vaccine shouldn’t cause concern.

We’re gathering data on COVID vaccine side effects in real time. Here’s what you can expect

There’s excellent ongoing research happening to define the “real world” side effects from COVID-19 vaccines. Many of us can play a part, and this information can inform us as a community about what to expect. While serious but rare side effects are making the headlines, the realistic expectation for most of us is that we may feel mildly unwell, and may need to take a day off our regular commitments, especially after our second dose.

What Does It Mean If My Ears Ring Or Toes Hurt After A Vaccine?

We've reported on some of the typical side effects many of us will experience after getting vaccinated against COVID-19. Since then, some readers wrote to NPR with concerns about a whole slate of more unusual conditions they've been noticing in the aftermath of their own vaccines.

The COVID-19 vaccine will make some people feel sick. But they’re not—that’s the immune system doing its job.

The side effects of the Pfizer/BioNTech and Moderna vaccines, explained.

Side effects—while temporarily uncomfortable—are a standard part of vaccination, says Dr. Stanley Perlman, a professor at the University of Iowa’s Carver College of Medicine and a member of the U.S. Food and Drug Administration’s vaccine advisory committee.

Side effects after your second shot may be more intense than the ones you experienced after your first shot. These side effects are normal signs that your body is building protection and should go away within a few days.