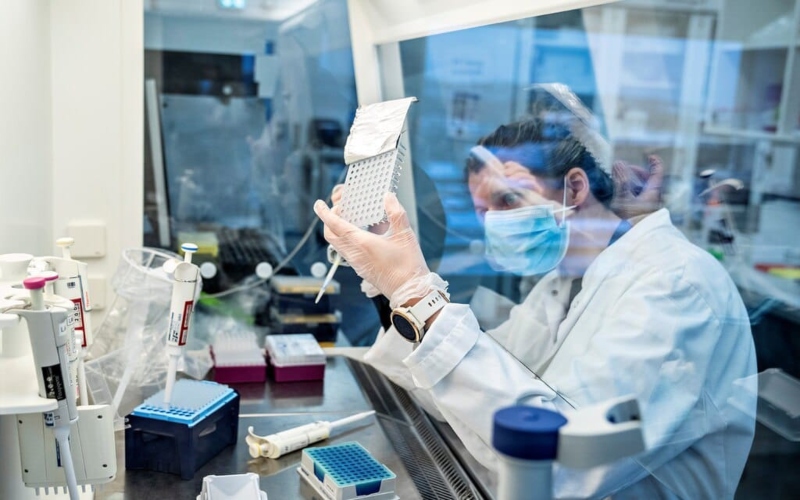 Covid-19 is evolving. Why now?

Since the start of the pandemic, SARS-CoV-2, the virus that causes Covid-19, has been mutating, its genetic code slowly changing as it spreads from person to person across the globe. For most of that time, the mutations didn’t concern scientists. The genetic changes didn’t seem meaningful in terms of how dangerous the virus is. Mutations are normal. Some even weaken the virus.

There are three mutated variants of SARS-CoV-2 of particular concern around the world. Researchers do not have the same level of evidence for each: One is more well understood than the others. But in each case, researchers see a seed of…

While it ain’t the “Centaurus” of Covid-19 attention right now, the new BA.2.75 Omicron subvariant does deserve to be closely monitored.

What Happens When We Run Out of Greek Letters for Variants?

Delta surges, alpha remains a concern. Gamma is less transmissible, while beta is more contagious. A few weeks ago, scientists were concerned about epsilon, which is potentially able to evade antibodies from vaccines; On Monday Texas saw its first case of lambda. These are all variants of the coronavirus, of course, though some have received less time in the spotlight than others

The Coronavirus Is Evolving Before Our Eyes

The virus is mutating as expected. We can still stop it.

What you need to know about the new COVID-19 variants

The reason people are concerned is that a lot of the mutations in these new variants are in the site targeted by the vaccines, something called the spike protein. But just because we’re seeing changes in the spike protein of these variants doesn’t necessarily mean that it’s going to undermine the vaccine.

What's Going On With All These Coronavirus Variants? An Illustrated Guide

OK. So what in the heck is going on with all these variants? Why is everyone so worried? And how do they work?

A COVID-19 variant is spiking in California, but don’t panic

Mutations are normal, but there’s still a lot we don’t know.

As Coronavirus Mutates, the World Stumbles Again to Respond

A South African tip led to the discovery of mutations around the world. With infections skyrocketing, “it’s a race against time.”

While all mutations found in emerging variants of coronavirus should be monitored, scientists are particularly interested in mutations occurring in the virus’s spike protein, specifically the receptor-binding domain (RBD) section of the spike protein.

Coronavirus variants, viral mutation and COVID-19 vaccines: The science you need to understand

The medical community needs to make a big push and get as many people vaccinated and thus protected as possible. If not, the virus will continue to grow in large numbers of people and produce new variants.

Laboratory studies of mutations circulating in South Africa suggest they may dodge some of the body’s immune responses.

You know, these are viruses, and like everything on Earth, they change over time. But viruses, in particular, they're replicating and spreading quickly, and they have high mutation rates compared to us.

IT IS looking likely that covid-19 vaccines will have to be updated in the coming months to remain effective against new variants of the coronavirus. Several vaccine manufacturers have confirmed that they are already working on new versions of their vaccines to make sure they remain effective. But what does updating the vaccines involve and how long will it take? At least two vaccines are less effective against the B.1.351 variant of coronavirus that was first identified in South Africa.

Emerging variants of the coronavirus have been in the news ever since scientists raised the alarm over B.1.1.7, a SARS-CoV-2 variant that first caught scientists’ attention in England in December and that is more transmissible than previously circulating viruses.

New versions of the novel coronavirus are spreading across the globe. Researchers fear the new lineages may spread more easily—and one may be more deadly.

The Coronavirus Is Mutating. What Does That Mean for Us?

The Most Worrying Mutations in Five Emerging Coronavirus Variants

Here is a guide to novel versions of the COVID-causing virus—and genetic changes that can make them more contagious and evasive in the body.

Coronavirus variants are becoming increasingly concerning as they mutate. Samples of the more transmissible B.1.1.7 coronavirus variant, which was first detected in the UK, have acquired a mutation that will help them evade immune protection – the same mutation already present in the B.1.351 variant in South Africa, which is now spreading worldwide.

There’s been a lot of talk going around about new variants of COVID-19. To date, scientists have identified more than 4,000 COVID-19 variants over this past year. Some of these strains, including the one that originated in the UK known as B.1.1.7, seem to be more infectious than other variants. Another strain, a variant first identified in South Africa (called 501Y.V2), has mutations on the so-called spike protein that is giving vaccine developers pause. Moderna has already found that its vaccine is slightly less effective against the South African variant.

What’s the risk of dying from a fast-spreading COVID-19 variant?

Cevik says more data and analysis are needed to conclude whether the variant is more deadly than other lineages. For instance, the latest study doesn’t consider whether people infected with the variant have underlying comorbidities, such as diabetes and obesity, and are therefore more vulnerable and at higher risk of dying, she says. The study also covers only a small fraction of COVID-19 deaths in the United Kingdom — some 7%

Evolutionary biologists, including myself, have cautioned against over-interpreting the threat posed by mutations. Most mutations will not help the virus, just like randomly kicking a working machine is unlikely to make it better.

How will Covid-19 evolve in the future?

Every time the coronavirus passes from person to person it picks up tiny changes to its genetic code, but scientists are starting to notice patterns in how the virus is mutating.

A guide to Delta-plus, Lambda, and other super infectious coronavirus variants

Mutations are normal, but there’s still a lot virologists don’t understand about the new variants.

What you need to know about the different strains of COVID-19. How do different variants compare to each other?

How Will the Coronavirus Evolve?

Delta won’t be the last variant. What will the next ones bring?

Beyond Omicron: what’s next for COVID’s viral evolution

The rapid spread of new variants offers clues to how SARS-CoV-2 is adapting and how the pandemic will play out over the next several months.

The Vanishing Variants: Lessons from Gamma, Iota and Mu

Studying the coronavirus variants that have faded away could help us prepare for what comes next, scientists say.

The question about how Covid-19 vaccines stand up to coronavirus variants often gets distilled to: Do they work? The simplest answer is yes. People who’ve received one of the highly powerful vaccines don’t need to be too worried about the variants for now,

Can Vaccines Stop Variants? Here's What We Know So Far

Because T cells get involved after an infection is underway, O'Brien said this suggests that even if a particular vaccine is not good at preventing infection by a variant, it may at least still end up substantially reducing the infection's severity.

A top U.S. health regulator said that asking people to frequently get Covid-19 boosters wasn’t sustainable because of vaccine fatigue and that authorities needed to develop a long-term strategy for protecting the public from the virus as it evolves. Dr. Peter Marks, who heads the Food and Drug Administration’s vaccines division, said that last week’s authorization of a second booster dose for people 50 years and older and for people 12 and older with weakened immune systems was a stopgap.

The coronavirus vaccines that have been developed are very effective in preventing severe disease and death caused by all variants, including Delta. Vaccines might not always prevent infections, but they make a substantial impact in reducing virus spread and risk for serious health problems. People who are unvaccinated are at a great risk for infection and harm from any variant of the coronavirus.

Countries across the world are rushing to put African nations on travel red lists. And that is bad news for global health. South Africa’s prompt efforts to sequence and identify the new omicron variant have triggered a worldwide response to contain any new outbreaks, which scientists say must be lauded.

The unusual Lambda variant is rapidly spreading in South America. Here’s what we know.

Its mutations help it dodge the immune system. Researchers are scrambling to figure out if it is more dangerous or transmissible than Delta.

Since the start of the pandemic, SARS-CoV-2, the virus that causes Covid-19, has been mutating, its genetic code slowly changing as it spreads from person to person across the globe.

The 3 Simple Rules That Underscore the Danger of Delta

Vaccines are still beating the variants, but the unvaccinated world is being pummeled.