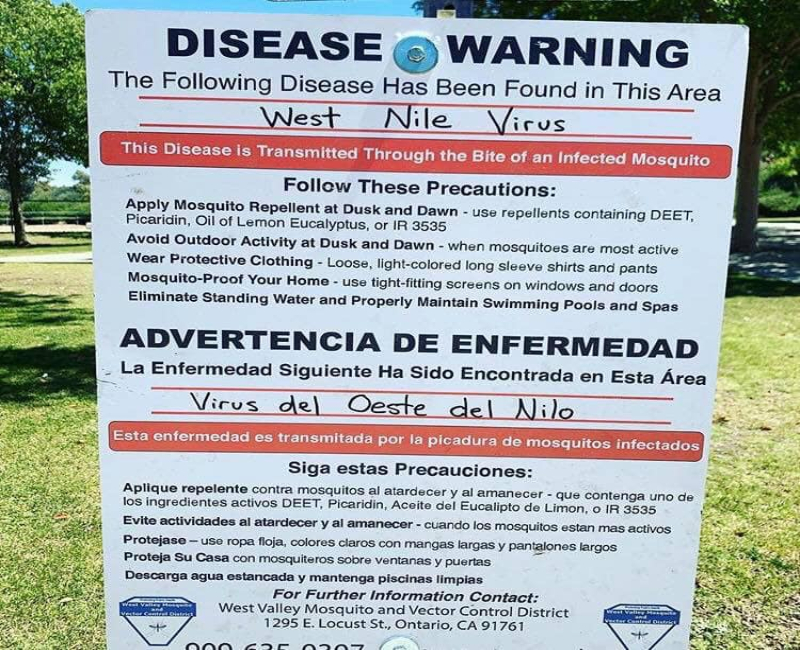 West Nile Virus: How Climate Change May Be Contributing To Its Spread

Here's something else that may suck more because of climate change: mosquitoes. And when mosquitoes suck more they may be more likely to transmit pathogens like the West Nile Virus (WNV).

Mosquitoes sucking more is not the only thing affecting the spread of WNV that may change with climate change. As Slomit Paz summarized in publication in the Philosophical Transactions of the Royal Society B: Biological Sciences, many mosquitoes like it hot and wet. This may sound dirty, because it is. When the temperature and humidity are higher, mosquitoes may not only feed more frequently but also reproduce more. They also may become infectious sooner after acquiring WNV.

Insect biologist MC Bugg-Z rhymes a message of West Nile virus prevention. Learn the symptoms and risks of West Nile Virus, and how to protect yourself from mosquito bites that can make you sick. Get more info about disease carrying insects and stopping the spread of disease from insect bites.

With international travel, migration and climate change, these infections are no longer confined to tropical and subtropical developing countries. Pathogens such as West Nile virus and Zika virus have caused significant outbreaks in the United States and its territories that are likely to continue, with new invasive pathogens being discovered all the time. Currently, control of these diseases is mostly limited to broad-spectrum insecticide sprays, which can harm both humans and non-target animals and insects. What if there was a way to control these devastating diseases without the environmental problems of widespread insecticide use?

Light pollution may promote the spread of West Nile virus

After the West Nile virus appeared on the U.S. East Coast in 1999, it spread across the entire country in just a few years, sickening thousands of people and striking down whole flocks of robins, crows, and other birds. Now, a new study suggests the mosquito-borne virus may have had an unexpected helper: light pollution. Birds infected with West Nile can spread the virus twice as long when they are exposed to night light,

On Top of Everything Else, Climate Change Helps West Nile Disease to Spread

In case there weren't enough reasons to be freaked out about climate change, here's another one: a new study shows it can make it easier for West Nile disease to spread. Super.

West Nile virus in an unlikely place: Why my loss is a wake-up call for all Americans

This year will be like no other for me: I’ll be without my dad. His recent death in Yolo County, California, intersected with my work to manage the impacts of climate change – in a very real and personal way. While West Nile is usually associated with damp summer conditions in the East rather than the arid West, I know now that drought can also lead to more cases.

Still water is where mosquitoes lay their eggs. That means turning upside down and emptying everything that may accumulate or hold water upside down such as your flower pots, helmets, tires, bottle caps, and I Love Katy Perry mugs. Finally, encourage and support local mosquito control efforts. Without the help of public health and insect control officials, things could get a lot worse and really, really bite.

The virus took the U.S. by surprise. Thanks to climate change, it’s here to stay.

Horses Have a West Nile Vaccine; So Why Don’t We?

A human version of the vaccine likely won’t be available for a decade, if ever. Why do horses have the pharmaceutical edge in the fight against West Nile?

Children are actually the least likely to get really sick from it.

In 2000, West Nile virus appeared for the first time in Pennsylvania in birds, mosquitoes and a horse. To combat the spread of West Nile virus, which is transmitted by mosquitoes, Pennsylvania has developed a comprehensive network. This network, which covers 40 counties, includes trapping mosquitoes, collecting dead birds and monitoring horses, people and, in past years, sentinel chickens.

In a press release from Emory University, Levine said, "This finding suggests that old growth forests may be an important part of an urban landscape, not just because of the natural beauty of ancient trees, but because these habitats may also be a means of reducing transmission of some mosquito-borne diseases."

24 February 2013; Remember the tension: A silent predator was striking down people across the city, and the death toll was climbing. Dallas suddenly was ground zero on the nation’s map for mosquito-borne West Nile virus fatalities. Harried officials struggled for the right response to the worst Texas outbreak in a decade. And despite a parade of cities joining the hotly debated aerial spraying campaign against disease-carrying insects, 36 people died across four North Texas counties.

Years of research show the poisons being used in the spray are safe for humans – and certainly safer than the virus, health officials said. But blogs and social media lit up with concerned comments from people afraid the insecticide might hurt them, their children or other creatures in the environment.

Killing Off West Nile Virus: Bad For More Than Bugs?

As communities, such as Dallas, Texas, contemplate doing aerial spraying to control mosquitoes carrying West Nile virus, many people are expressing concerns about how the pesticides will affect their health, and the health of their environments. Melissa Blocks speaks to Dr. Robert Peterson, professor of Entomology at Montana State University.

Researchers in Texas find 13% of patients there died, some years after infection

Thanks to international tire trade and global warming, disease and pestilence come to be a part of it.

August 23, 2012: The recent West Nile virus outbreak is the largest ever seen in the United States, according to new numbers from the Centers for Disease Control and Prevention. The number of cases so far this year is the highest recorded through August since the disease was first detected in the United States in 1999. As of Tuesday, 38 states had reported human infections.

West Nile virus outbreak: How to protect yourself

The good news is about 80 percent of people who are infected with the virus won't show any symptoms at all. Up to 20 percent, however, may develop a fever, headache, body aches, vomiting, swollen lymph glands or a skin rash. These symptoms may last a few days or a few weeks, even in otherwise healthy people. But about one in 150 people will develop a severe illness, in which they may have a high fever, neck stiffness, convulsions, vision loss, paralysis, coma or other neurological effects that may be permanent.

West Nile virus (WNV) has quickly established itself in North America since its recognition in New York City in 1999. Historically, WNV has been associated with temporally dispersed outbreaks of mild febrile illness. In recent years, the epidemiology and clinical features of the virus appear to have changed, with more frequent outbreaks associated with more severe illness being noted.

Where does West Nile virus go in winter?

Sporadic epidemics of West Nile Fever occur in Europe in the summer months when the mosquito vector of West Nile virus is biting. Do new introductions occur each year, or does the virus overwinter somewhere?

With West Nile On The Rise, We Answer Your Questions

The West Nile virus now found across the continental United States, Canada, Central America and the Caribbean is an Israeli strain introduced into New York City in 1999. It was likely carried by an infected stowaway mosquito that arrived by plane or cargo ship. Some think an off-course bird might have carried the virus to North America, but Haley thinks this is unlikely. "Bird infections last only a few days," he says, "and the bird would have been sick and unable to fly long distances." Haley says WNV is related to mosquito-borne viruses that cause St. Louis encephalitis, dengue fever, yellow fever and Japanese encephalitis.

West Nile Virus: How Climate Change May Be Contributing To Its Spread

Here's something else that may suck more because of climate change: mosquitoes. And when mosquitoes suck more they may be more likely to transmit pathogens like the West Nile Virus (WNV).

Prevention measures consist of community-based mosquito control programs that are able to reduce vector populations, personal protection measures to reduce the likelihood of being bitten by infected mosquitoes, and the underlying surveillance programs that characterize spatial/temporal patterns in risk that allow health and vector control agencies to target their interventions and resources.

The time from infection to developing symptoms of West Nile infection is usually 3 - 14 days. Mild infections are common and include a high temperature, headache and body aches, often with skin rash and swollen lymph glands. However, the majority of people who get infected do not have any symptoms at all. Diagnosis is made based on the symptoms and in most cases can be confirmed by urine, blood or spinal fluid tests.

In Manitoba, West Nile virus (WNV) is transmitted to humans primarily by the Culex tarsalis mosquito, usually during late June, July, August and early September. This risk varies from year to year based on precipitation, temperature, mosquito population and other factors.

Humans normally acquire the viral infection through a mosquito bite. The early fall, from late August to early September, is the most common time for infection to occur in the U.S. West Nile virus has the potential to cause a very serious illness, although 80% of people infected will not develop any symptoms at all.

West Nile virus (WNV) is an infectious disease that first appeared in the United States in 1999. Infected mosquitoes spread the virus that causes it. People who get WNV usually have no symptoms or mild symptoms. The symptoms include a fever, headache, body aches, skin rash, and swollen lymph glands. They can last a few days to several weeks, and usually go away on their own.

Infects birds and mammals (including humans). West Nile virus is primarily an avian pathogen, and is transmitted among birds by ornithophilic (bird-biting) mosquitoes; including the Asian tiger mosquito and other mosquito species.

West Nile Virus (WNV) can cause neurological disease and death in people. WNV is commonly found in Africa, Europe, the Middle East, North America and West Asia. WNV is maintained in nature in a cycle involving transmission between birds and mosquitoes. Humans, horses and other mammals can be infected.

Despite low numbers of reported caes in Wyoming over the last few years, a Wyoming Department of Health representative is reminding residents to protect themselves from West Nile virus as warmer weather arrives.