Ultimately, men need to be empowered in their decision-making through being part of a process that enables and supports them in making fully informed choices - Sandra Turner 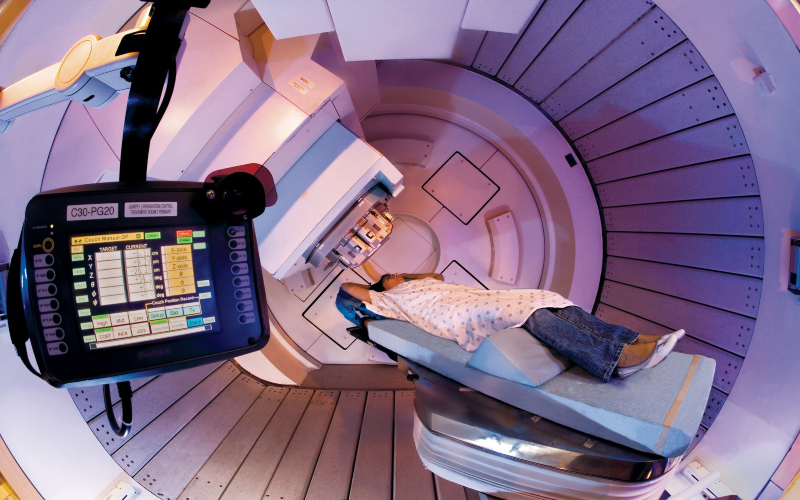 Radiotherapy could increase the chances of survival for thousands of men with prostate cancer that has already spread by the time they are diagnosed, new research suggests...

The standard treatment for advanced or metastatic prostate cancer is hormone therapy drugs. “Until now, it was thought that there was no point in treating the prostate itself if the cancer had already spread because it would be like shutting the stable door after the horse has bolted,” said the lead researcher of the study, Dr Chris Parker of the Royal Marsden hospital in Surrey.

The trial, called Stampede and based at the Medical Research Council’s clinical trials unit at University College London, investigated…

Brachytherapy: Is It the Best Option for Your Prostate Cancer?

“This type of treatment is competitive to other options — surgery and external beam radiation — and the cure rates are similar,” says radiation oncologist Jay P. Ciezki, MD.

Does Proton Beam Therapy for Prostate Cancer Live Up to Its Promise?

Men diagnosed with prostate cancer are faced with an array of prostate treatment options. Proton beam therapy-a form of external beam radiation therapy-is the latest choice now available in the United States. But it’s a controversial option as well, with some critics suggesting that its popularity may be driven by advertising rather than by sound scientific evidence of benefit over other therapies.

Proton therapy for prostate cancer: does the evidence support the hype?

While protons have been shown to an effective treatment for prostate cancer, no consistent advantage has been seen for either long-term survival or quality of life.

In the absence of a broad base of solid evidence, men often make decisions based on personal preferences or on the advice of a trusted doctor. Like Mr. Kolnik, some want as short a recuperation as possible and find the newer kind of radiation treatment appealing. But prostate cancer specialists worry about the lack of data.

Cancer immunotherapies are treatments that stimulate the immune system to target and attack cancer. Researchers now believe that combining immunotherapy with traditional therapies could open up new possibilities for cancer treatment.

Because the prostate is close to several vital structures, radiation therapy can disrupt normal urinary, bowel, and sexual functioning.

Australian men with a recent diagnosis of prostate cancer that require active treatment, as opposed to careful monitoring, are often not given all the options available to them. This means not all men are getting the necessary information and support to make a decision on what treatment is best. A growing body of evidence and treatment guidelines support the fact that less invasive radiation therapy is equally effective in curing or controlling cancer as surgical removal of the prostate, known as radical prostatectomy.

External-beam therapy is used as a curative treatment in men with localized prostate cancer (stages T1 or T2), or with locally advanced disease. Sometimes it is given in conjunction with brachytherapy. For men who have a high risk of prostate cancer recurrence, external-beam therapy is combined with two to three years of hormonal therapy, and has been shown to make a significant improvement in survival compared to radiation alone.

What Every Man Should Know about Radiation Therapy for Prostate Cancer

For a patient with disease that is confined to the prostate and not too aggressive, brachytherapy alone is a good option. With the use of sophisticated real-time computer-based planning, we can use brachytherapy to deliver radiation in an extraordinarily precise way, with minimal exposure to the surrounding normal tissues. It is also convenient for the patient as it is done in an outpatient setting and most people are able to get back to work the next day. But brachytherapy is not right for everyone. For some patients with less-aggressive disease, a watch-and-wait approach would also be very reasonable.

“Adding radiotherapy to current treatment shows clear benefit for this subgroup of men with prostate cancer. We now need to investigate whether this could also work for other types of cancer. If we can understand exactly why these men benefit from the additional radiotherapy treatment, we could hopefully use this approach to benefit even more patients.”

The National Association for Proton Therapy (NAPT) is an independent nonprofit organization founded in 1990 to educate and increase awareness about the clinical benefits of proton therapy. Proton therapy is one of the most advanced methods of radiation treatment available today due to its unique ability to allow radiation treatment doses to be delivered to cancerous tumors while minimizing radiation exposure to healthy tissues and organs.