Ultimately, though, even if artificial pancreas technology evolves to the point of full automation, it's still a machine. It can break. And it's not a cure - Miriam E Tucker 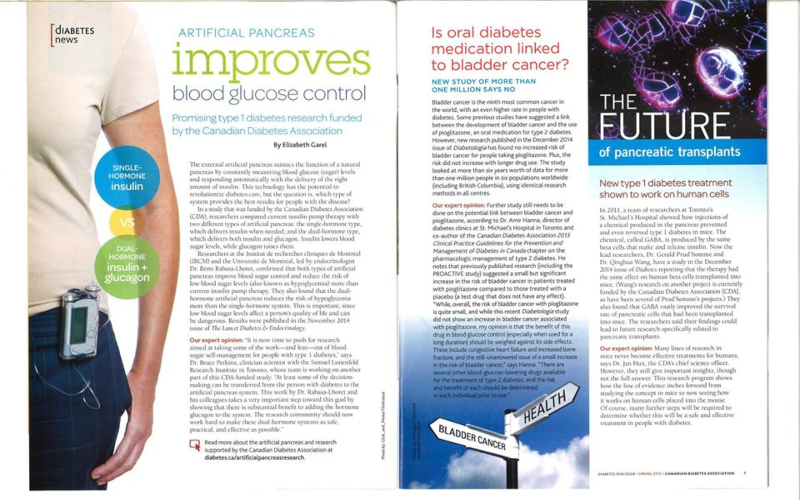 Algorithms are boring until your life depends on them. People with Type 1 diabetes use algorithms all day long. They perform mental calculations to manage their blood-sugar levels, which are measured by hand with a finger prick, or with a wearable sensor that fits under the skin. If they stray too far from baseline, the consequences can range from exhaustion and depression, to coma and death.

Usually when humans are doing something for which a computer would be much superior, such as performing calculations, a company will jump in and automate it. Algorithms for managing diabetes are no different. Any competent programmer with access to either long-term or real-time glucose and insulin…

An artificial pancreas system that uses a smart phone app coupled with a glucose sensor and an insulin pump has shown promise in a preliminary trial in people with type 1 diabetes, researchers report. While there have been great strides in the development of pumps and sensors, putting them together with some sort of algorithm has been “the holy grail,” said Ng, who was not involved in the new study. Hackers have tried for years to get glucose sensors and pumps to talk to one another. “It’s been kind of a wild, wild west out there,” Ng said. The problem with the current study is that it was so small. “You can’t make too many conclusions based on that many patients,” Ng said.

A sensor implanted just beneath the skin keeps an eye on blood sugar levels and sends that information to an iPhone app. Every five minutes, the app determines how much insulin (which lowers blood sugar) or glucagon (which raises blood sugar) its wearer needs and sends a command to the device to deliver the hormones via one of two pumps.

Ultimately, though, even if artificial pancreas technology evolves to the point of full automation, it's still a machine. It can break. And it's not a cure.

It would eliminate the need for diabetics to inject insulin up to four times a day. The artificial pancreas could help all type 1 insulin-dependent diabetics and some type 2 diabetics who need daily injections. ‘This device is cheap and simple to use,’ said Professor Taylor. ‘It has the potential to bring an end to the misery of daily injections for diabetics.’

A new study on the efficiency of the so-called 'artificial pancreas' suggests it's a huge leap in the right direction for people with diabetes who are in constant need of monitoring their blood glucose.

Companies work on artificial pancreas, but approval process is too long for many patients.

The Artificial Pancreas Is Here

Devices that autonomously regulate blood sugar levels are in the final stages before widespread availability.

The artificial pancreas: challenges and opportunities

Researchers have begun to investigate some of the specific challenges surrounding artificial pancreas use. Findings from qualitative research in adolescents emphasise concerns about calibration difficulties, equipment failure, disturbed sleep due to alarms, and issues with wearing and managing several devices.

The Artificial Pancreas: What Is It and When’s It Coming?

The first precursors of the artificial pancreas date back to the 1970s. In the 50 years since, improvements have been made on all fronts: control algorithms are getting more predictive and less reactive, and pumps and glucose sensors are getting more accurate. Yet many challenges remain, such as the need for faster insulin, more stable glucagon, and systems that can work without user intervention, e.g. during meals and exercise.

This Woman Designed - And Texts - Her Own Pancreas

Dana Lewis texted her pancreas on Thursday. Of course, the text wasn't the typical "Hey, what's up?" or "You free tonight?" Instead, it was a command to give her blood's glucose level a little boost - she needed to give herself a bit of a buffer ahead of a big speech.

We finally have an “artificial pancreas” for diabetes. But it's a letdown

You'd think that a new device called the "artificial pancreas" would be a godsend for someone like her. Designed to make insulin delivery less of a hassle by automating it, the MiniMed 670G by Medtronic was called "revolutionary" and a game changer after the Food and Drug Administration approved it in September. But families like the Weddings say the device, slated to hit the market in spring 2017, has been incredibly overhyped.

Basically, she taught the pump to read her CGM and respond automatically. When the monitor and the pump work together, they become what Lewis has dubbed the Artificial Pancreas System (#OpenAPS). She calls it "closing the loop."

Latest news re the artificial pancreas.

Latest news on the artificial pancreas.