Celebrate your scars sweet soul.. they are a proof you have made it through - SC Lourie 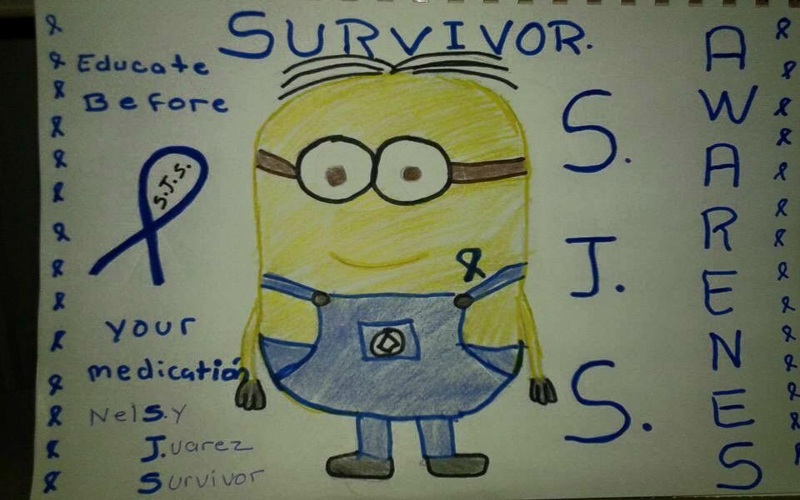 Stevens-Johnson Syndrome - A Risk We Take With Pills

My phone rang one evening four years ago, and it turned my world upside down. Delanie, the mother of one of my closest friend's Dinushka Vethavanam was on the other end, with shock, confusion and sadness in her voice, saying that Dinushka has been admitted to hospital with Stevens Johnson Syndrome (SJS). So I did what I do with any topic that I don't know about - an internet search - which revealed horrifying and gruesome pictures of victims of the condition.

Dinushka, who I met in 1991 in first grade is one of my oldest friends and is blessed with good looks and beautiful hair and to imagine that she was battling such a dreadful medical condition where her appearance was severely…

Because Stevens Johnson Syndrome. Because Toxic Epidermal Necrolysis. Because Bactrim

That evening in the ER at Texas Children's Hospital I learned, learned is the wrong word, I witnessed the beginnings of the most horrific allergic reaction ever. By that evening his eyes were swollen shut and the rash was raised.

SJS, which is a milder form of TEN, are much more serious conditions, with both conditions leading to separation of the upper layer of skin involving the mucous membranes (mouth and lips) with formation of ulcers limiting a person’s ability to eat and drink, resulting in dehydration. Certain antibiotics including sulfonamides, penicillins, seizure medications such as phenobarbital and dilantin, as well as NSAIDS have been implicated in SJS and TEN. Underlying infection with Mycoplasma Pneumoniae, Epstein-Barr virus (EBV) as well herpes simplex have been implicated as potential causative agents as well.

Stevens-Johnson Syndrome/Toxic Epidermal Necrolysis and Treatment With a Biologic: A Case Report

One of the most dangerous dermatologic emergencies is Stevens-Johnson Syndrome (SJS)/toxic epidermal necrolysis (TEN). Although a rare disease, it can often lead to significant mortality. We provide a brief review of SJS/TEN. Nonsteroidal anti-inflammatory drugs are a rare cause of SJS/TEN, and additionally, the use of biologics is a novel treatment modality for SJS/TEN.

Researchers at Mass. Eye and Ear are committed to finding better treatments and cures for a serious, yet poorly understood, autoimmune disorder called Stevens Johnson syndrome (SJS). In honor of SJS Awareness Month, we highlight their important work and celebrate Katie—an SJS survivor and champion for a cure.

A woman develops a fever and an itchy, bright red rash on her torso and face while camping in Vermont. Can you figure out what’s making her sick? As usual, the first person to figure out the diagnosis gets a signed copy of my book “Every Patient Tells a Story” and the pleasure of figuring out a case that stumped a bunch of very smart doctors.

More than 380 readers wrote in with their diagnoses, and 63 of them — or about one in six of those who wrote us — had the correct answer. The correct diagnosis is… Stevens-Johnson syndrome

Stevens-Johnson Syndrome - A Risk We Take With Pills

If you have recently taken a drug, no matter how common it may seem and you have a reaction that includes flu-like symptoms and a rash, rush to the emergency department, as Stevens Johnson Syndrome can turn deadly very fast.

She was itchy, and the skin on her tongue was sloughing off in thick sheets. Wednesday afternoon a dermatology team diagnosed her with Stevens Johnson Syndrome, a severe allergic reaction to medication - they suspected the Bupropion she had been taking. They began administering steroids and pain medication (among other things), and the waiting game began. To read about her progress since her diagnosis, check out the blog. It has been updated on and off since being diagnosed in April of 2013, and describes living life after being discharged from Mass General.

To INFORM EVERYONE who takes ANY type of medication of the symptoms of Stevens-Johnson Syndrome, including TEN (Toxic epidermal necrolysis); offer information on what to do if you suspect that you, or someone you know, has either of these conditions.

The journey of a butterfly

A journey to inner strength and beyond

There are definitely times I question my existence, times I wonder why God didn't take me when he had the chance? Times I say Why me? Times my sight is so weary and blurry that I can't even cry anymore with frustration, but keep pushing through...

This blog is the story of my son, Austin, who has had Stevens Johnson Syndrome three times. Austin's SJS is caused from a virus. SJS can also be caused by a severe adverse reaction to medication. Almost any medication including over-the-counter drugs, such as Ibuprofen, can cause SJS. Most commonly implicated drugs are anti-convulsants, antibiotics (such as sulfa, penicillin and cephalosporin) and anti-inflammatory medications...

Stevens-Johnson syndrome is an immunological skin conditions, often secondary to drugs or infection. Initial presentation is usually a feverish prodromal period followed by a blistering erythematous skin condition – characterised by mucous membrane involvement. There is overlap in the presentation with Toxic Epidermal Necrolysis and erythema multifome exsudativum majus. They are all on the spectrum of the same pathogenetic disease process

Stevens-Johnson syndrome is usually caused by an unpredictable adverse reaction to certain medications. It can also sometimes be caused by an infection. The syndrome often begins with flu-like symptoms, followed by a red or purple rash that spreads and forms blisters. The affected skin eventually dies and peels off.